Trump's visit to the United Kingdom this week proved another embarrassment for the United States on the global stage, though a testament to the extreme diplomacy of Royal Family.

The purpose of the trip was to commemorate the 75th Anniversary of D-Day, the World War II battle that began the liberation of German-occupied France from Nazi control, and subsquent victory by the US and its allies in Europe. 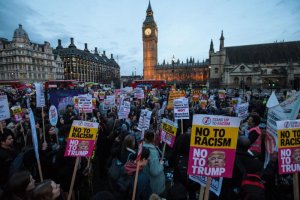 Trump actions in office, however, including regularly insulting foreign heads of state, have threated many of the historic alliances that grew out of that war -- and this trip was no exception.

A week before the visit, Trump insulted Meghan Markle, the Duchess of Sussex, calling her "nasty" for negative comments she made about him during the 2016 presidential campaign. Markle, who is the first American to join the royal family, recently gave birth to a son, Archie, with husband, Prince  Harry.

On day one of the trip, Trump also engaged in a twitter war with London Mayor Sadiq Khan, a Muslim, calling him a  "terrible" mayor and "a stone cold loser."

The incidents further enraged members of the British Parliament, who passionately debated allowing Trump a formal state visit, and the British people protested with an online petition.

The petition, backed by 1.8 million people, stated Trump's "well documented misogyny and vulgarity disqualifies him from being received by Her Majesty the Queen or the Prince of Wales," as it would cause "embarrassment." 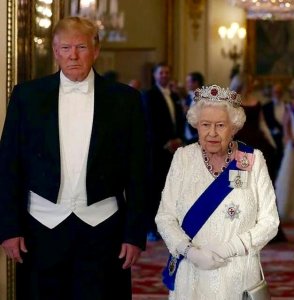 In characteristic diplomatic fashion, however, the Royals rolled out the red carpet for Trump and his family.

The British Monarchy
Under the British Constitution, executive authority for "Her Majesty's Government," the governing bodies of the United Kingdom, lies with the Queen monarch.

The monarch, however, takes little direct part in government, which is actually run by a Parliament, Cabinet and Prime Minister, who is officially appointed by the Queen, and is typically the leader of the majority political party or coalition.

Otherwise referred to as the sovereign or "His/Her Majesty", abbreviated H.M., the monarch is also the Supreme Governor of the established Church of England and the commander-in-chief of the British Armed Forces. Her role, however, is largely ceremonial and limited to non-partisan functions, such as granting appointments and honors.

Forty-five sovereign nations in the world have monarchs acting as heads of state, sixteen of which are Commonwealth realms that recognize Queen Elizabeth II as their head of state.

The Royals
The British Monarchy is one of the oldest, and unquestionably the most iconic and famous monarchies in the world. 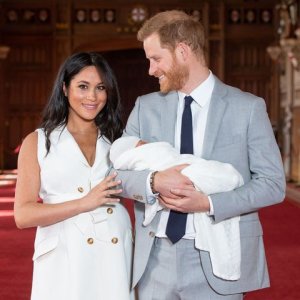 29.2 million people tuned in to the Royal Wedding of Prince Harry and Meghan Markle in May, 2018. They had a son, Archie, in March (Lipinsky/Getty)

The current Royal Family is directly descended from William the Conqueror, the first "Norman King" of England, who reigned from 1066 until his death in 1087.

Queen Elizabeth II, 93, who ascended the throne in 1952, is the longest reigning British monarch, with four children, eight grandchildren and eight great-grandchildren.

Since 1917, when King George V changed the name of the royal house, members of the royal family have belonged, either by birth or by marriage, to the House of Windsor.

Members of the royal family have long been a US and worldwide fascination, which further exploded with the advent of the internet, the impact of media, and the ability to follow the real-life events of its members. 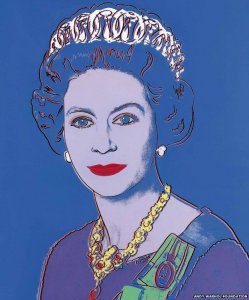 The near-obsession with the royal famly reached its height with the marriage of Queen Elizabeth's eldest son, Charles, the Prince of Wales and successor to the crown, to Diana Spencer.

More than 750 million people worldwide watched their 1981 "fairytale" wedding, and devoutly followed their marriage, the birth of their sons William and Harry, the events that unfolded around their divorce, and finally Diana's tragic death in 1997.

The world has since watched William and Harry grow up, and have embraced their marriages and, in recent years, celebrated the birth of their children.

Among Americans, the Queen, Harry and William remain the most popular Royals, with Meghan Markle not far behind.

May 26, 2022 In the more than six years that I have been writing the DemDaily column, over 30 articles have been dedicated to the subject of gun violence in America. The tragedies have been many...

November 14, 2018 With Democrats’ control of the House comes an internal battle for who will lead their party moving forward, to be decided in the coming weeks as Congress returns for the...

December 10, 2021  To remind us to laugh. On the 50-foot tree in front of Fox News’s New York City headquarter, which was set on fire this week “The fire is believed to have started after Fox...