While most of Washington is focused on figuring out the author of the anonymous New York Times op ed that describes the "resistance" within the White House, another resistance within the federal government scored a major federal court victory August 24th against the Trump administration.

The ruling, by Judge Ketanji Brown Jackson of the U.S. District Court for the District of Columbia,
struck down key provisions of President Trump's May 25th executive orders aimed at making it easier to fire federal employees and weaken their union representation in the workplace.

The May Executive orders, which affected 2.1 million civil servants, targeted revisions to the Federal Service Labor-Management Relations Statute, which governs labor relations in the federal civilian workplace, and employees' rights in three areas:

*  Removal Procedure and Merit Principles: Removed the use of "comparators" or universal standards for firing employees and removed defined timelnes for employee performance improvement.  It also prohibited employees from filing grievance challenges against unfair evaluations or blocks to pay raises, and amendment of personnel files to remove wrongfully accused charges from records. 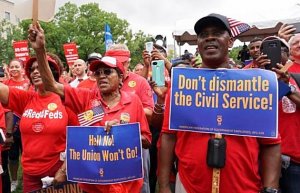 *  Official Time: Drastically cut the hours, and physical workplace offices, for legally mandated union representatives to respond to employees' needs regarding grievances, discrimination and unfair practices in the workplace.

* Collective Bargaining: Restricted union negotiations and collective bargaining agreements (CBAs), from scope of issues and timeline, to due process and how a union negotiates workplace protocols such as reasonable accommodations for those with disabilities, employee training, overtime, telework, and flexible work schedules.

A large coalition of federal labor unions, led by the American Federation of Government Employees (AFGE), filed suit to block the implementation of the orders, charging they violating the right to freedom of association guaranteed by the First Amendment, and exceeded the President's authority under the Constitution of the United States.

The Court agreed, ruling the order on official time violated the Constitution and the separation of powers as established in law by attempting to deny federal workers their legal right to representation.

As a result the Office of Personnel Management ordered agencies to comply with the judge's ruling and restore employees' rights. 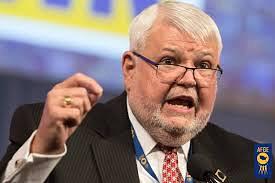 AFGE President J. David Cox, "We will not let up this fight until all federal employees are given the workplace protections and conditions they deserve"

The ruling also follows a pattern by some courts that have reeled in Trump's executive overreach in limiting or overturning the civil and federal rights of US citizens. "Union busting," in particular, has been high on the administration's priority list.

Labor was dealt a serious blow, however, by a June 27th 5-4 Supreme Court decision in Janus vs. AFSCME that ruled that requiring a public-sector employee to join or pay "agency" fees to a union for the cost of collective bargaining violated that employee's First Amendment right to free speech.

As a part of DemList’s mission to profile the good work of the democratic family, we are happy to highlight one of the DNC’s most important constituency organizations...

June 24, 2022 The fifth hearing of the House Select Committee to Investigate the January 6th Attack, commenced at 3:00pm Thursday — the last to be held before Congress recesses. Over the...

June 30, 2022 Voters in eight states went to the polls Tuesday. Primaries took place in Colorado, Illinois, New York, Oklahoma, and Utah, and runoff elections were held in Mississippi and South...