On Sunday, Virgin Galactic owner Richard Branson became the first billionaire to travel into suborbital space in a historic moment for the commercial space industry.

Onboard the supersonic space plane, which has been two decades in development, were Virgin Galactic employees Beth Moses, Colin Bennett, and Sirisha Bandla and pilots Dave Mackay and Michael Masucci. 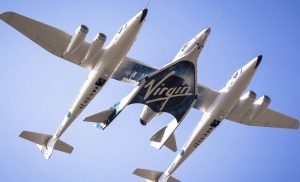 At 9:15am MDT yesterday, the VSS Unity detached from its mothership, dubbed the WhiteKnightTwo, blasting off at 46,000 feet over the New Mexico desert at speeds of 2,300 miles per hour.

The rocket-powered spaceplane soared 53.5 miles to beyond the edge of space, where the crew experienced approximately four minutes of weightlessness and a "magical" world view before descending and safely landing an hour later.

The Race To Space
Virginia Galactic is one of three companies competing for the future of commercial space tourism.

In the battle of the space "billionaires boys and their toys," Branson beat out Amazon founder Jeff Bezos in the race to carry the first space "tourists."

Bezos' space company, Blue Origin, was poised to put him into orbit before Branson until Virgin Galactic moved up their timeline, announcing earlier this month that Branson would be on the next test flight.

Bezos congratulated Branson and his team on Instagram saying, "Can't wait to join the club!" Bezos' flight aboard his New Shepard rocket, scheduled for July 20th, will be the first to have a paying customer on board, an unidentified bidder who won a ticket through a Blue Origin Foundation charity auction for the price of $28 million. 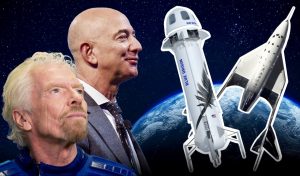 The third competitor in the commercial "space" is engineer, entrepreneur and billionaire Elon Musk. His company, SpaceX, became the first private company to return a spacecraft to low-Earth orbit in 2010 and, in 2012, became the first to deliver cargo to and from the International Space Station.

In 2018, Musk famously launched his own Tesla Roadster into space aboard SpaceX's Falcon Heavy rocket, with a "Starman" dummy rocking to David Bowie's "Space Oddity," on board.

In May of 2020, as a part of a public-private partnership with NASA, SpaceX became the first private company to send humans into orbit, as well as to send a team to the International Space Station.

As a part of that partnership, in the next two months, SpaceX will launch a Crew Dragon spacecraft carrying four private astronauts in what is being called its "Inspiration4" mission. The seats have been purchased by entrepreneur Jared Isaacman, who is using the flight to promote children's cancer research.

Musk, who is a "friend" of Branson's, has actually purchased a ticket aboard a future Virgin Galactic trip, and Branson has suggested he may fly on a SpaceX ship "one day."

In the more than 50 year-history of suborbital and orbital human space travel, 95% of flights were undertaken by government astronauts on government-designed and -funded vehicles. 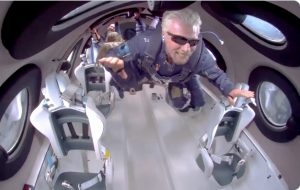 Branson's landmark voyage is a turning point in what is expected to be a new commercial industry dominated almost entirely by private companies moving forward.
Your Ticket to Space
It may be at least a decade, however, before space travel is affordable for the average American.

Virgin Galactic already has deposits from more than 600 aspiring space travelers at $250,000 per seat on a future suborbital flight. The cost is likely to go up for the next round of customers before we start to see access to the less affluent public.

Branson, however, announced this weekend that, in an effort to "democratize space," Virgin Galactic is holding a charity sweepstakes for two free tickets on one of the initial commercial flights, along with a tour of the facility for the winners from Branson himself.

The proceeds from the drive, which suggests a minimum donation of $10 to enter, will benefit nonprofit Space for Humanity, which aims to send citizen astronauts of diverse racial, economic and disciplinary backgrounds to space. You can enter through August 31st at omaze.com/space!