DemDaily: The Race To Legislate

DemDaily: The Race To Legislate

With just a week remaining until the full Congress recesses, the pressure is on to pass legislation during the lame-duck session before a divided government convenes in January. 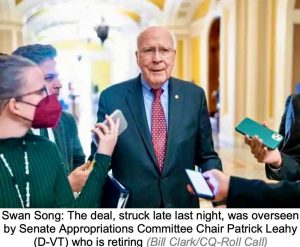 The Priorities:
Pending: Fund The Government:
Congress reached a bipartisan deal on government funding for the 2023 fiscal year this afternoon, agreeing to a framework for a $1.7 trillion omnibus appropriations bill to stave off a government shutdown.

Lawmakers were under pressure to meet a December 16 deadline, and are still expected to pass a one-week Continuing Resolution (CR), a "stop-gap" measure to keep the federal government running at previously approved levels through December 23.

The major points of contention were between the GOP's push for more defense spending versus Democrat's demand for non-defense discretionary spending, which includes more social and domestic programs. The terms of the final agreement have not been published.

Although Senate GOP leaders joined House and Senate Democrats in agreeing to the funding package, House Republicans, led by Minority Leader Kevin McCarthy, opposed the full-year bill, hoping to have more control when the GOP takes over the House next year. 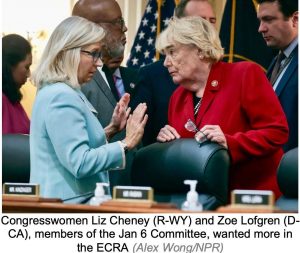 Pending: The government funding bill includes a major overhaul of the 1887 Electoral Count Act. The bipartisan Electoral Count Reform Act (ECRA), sponsored by Susan Collins (R-ME) and Joe Manchin (D-WV), is aimed at preventing another event like the January 6, 2021 attack on the US Capitol and correcting the vulnerabilities in the law that were exploited by the insurrectionists.

The Act clarifies the vice president’s ceremonial role of counting votes, lifts the threshold to object to electors, bolsters laws about certifying elections for the correct winner and promotes orderly presidential transitions.

The House passed its own version of the legislation, sponsored by Congresswomen Zoe Lofgren (D-CA) and Liz Cheney (R-WY), in September. This comes as the House January 6 Committee is poised to wrap up its work next week. 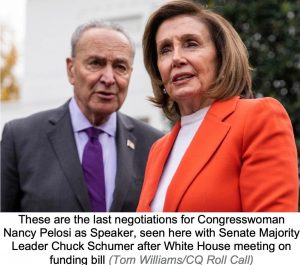 Pending: Reauthorization of military funding under the National Defense Authorization Act (NDAA) for Fiscal Year 2023. On December 8, the House of Representatives passed HR 7776, the bipartisan, bicameral text of the NDAA by a vote of 350 to 80.

The Act includes $800 million in support of Ukraine's ongoing resistance to Russia's war of aggression and up to $10 billion in military aid for Taiwan over the next five years. It also drops the Covid-19 vaccine mandate for service members from the bill, a final sticking point for Republicans.

The mammoth $858 billion measure is now in the hands of the Senate, where it is likely to pass.

Pending: Judicial Confirmations. With the Senate majority secured, the race to confirm more Biden’s judicial nominees by the end of this Congress is less urgent. Democrats, however, are still under pressure to move Biden's judicial picks, in part, because they would have to be renominated in the new Congress. 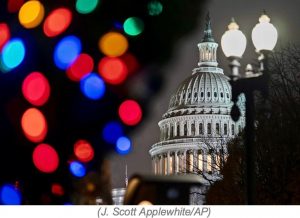 Thus far in the 117th Congress, the Senate has confirmed 97 lifetime federal judges, including Justice Ketanji Brown Jackson as the first Black woman to serve on the US Supreme court.

As the session nears its end, there are currently 29 nominees awaiting a floor vote, 10 to be reported out of the Senate Judiciary Committee, and five awaiting a hearing.

The House is currently scheduled to adjourn December 15th, while the Senate is set to remain in session until December 22nd. The final acts of the 117th Congress, however, are far from over.

April 21, 2022  On May 23, 2022, the United States will end the implementation of Title 42, a Trump-era pandemic restriction that has effectively blocked 1.7 million migrants from entering the...