The Purged
On Friday, February 7th, two days after the Senate acquitted the President of coercing Ukraine into investigating the president's political rivals, Trump began a purge of White House corps who testified against him in the House impeachment hearings. 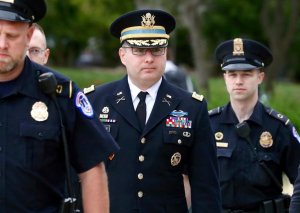 Lieutenant Colonel Alexander Vindman, a top Ukraine expert at the National Security Council and a key witness in the hearings that led to Trump's impeachment on abuse of power, was escorted out of the White House by security.

Vindman was due to leave his job in July but was abruptly pushed out, along with his twin brother Yevgeny, a senior NSC lawyer.

The same day, US Ambassador to the European Union Gordon Sondland, who was intricately involved in the Ukraine scandal, was fired.

Sondland, a hotel chain mogul who donated more than $1 million to the president's inaugural committee, testified before the US House in November that "we followed the President's orders...everyone was in the loop," and that there was "a quid-pro-quo" in the President's efforts to pressure Ukraine.

The Departed
On Tuesday, February 11th, the entire team of Department of Justice (DOJ) prosecutors who led the obstruction and perjury case against Trump senior campaign advisor and longtime friend Roger Stone, resigned. 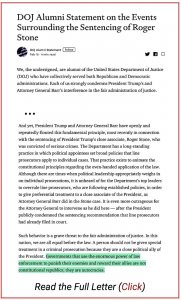 The next day US Attorney General William Barr overruled his own prosecutors, sending a memo to the court requesting a shorter, more "reasonable" sentence for Stone.

The House Judiciary Committee has also called on Barr to answer "grave questions" over his leadership of the justice Department.

On Sunday, more than 2,000 former Justice Department officials who served in both Republican and Democratic administrations, posted online a signed statement calling on Barr to resign.

Barr will testify before the House on March 31st. In the interim, Roger Stone will be sentenced in federal court in DC this Thursday. There is widespread speculation that President Trump may still outright pardon his former adviser. 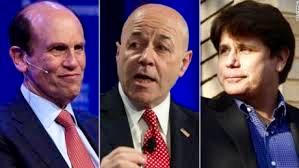 Rod Blagojevich (D) served as Governor of Illinois from 2003 until his impeachment, conviction, and removal from office in 2009 on charges of corruption in a "pay for play" scheme to sell the appointment of the US Senate seat vacated when Barack Obama won the presidency. Blagojevich, who once appeared as a contestant on Trump's reality show, has served eight of his 14-year sentence.

Edward DeBartolo Jr. is the former San Francisco 49ers owner who pleaded guilty in 1998 to failing to report an extortion attempt that led to imprisonment of former Louisiana Governor Edwin Edwards.  DeBartolo did not serve jail time, but agreed to pay up to $1 million in fines. 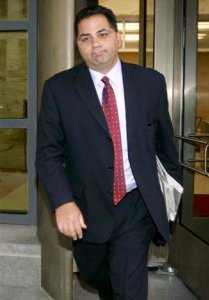 Michael Milken, known as the "Junk Bond King" of 1980s Wall Street, served 22 months of a 10-year prison sentence for violating securities laws in a scheme tied to former stock trader Ivan Boesky. He also paid a $600 million fine and was banned from the securities industry.

Ariel Friedler, a software entrepreneur who pled guilty to conspiracy and computer hacking, served two months in prison. David Safavian is a former George W. Bush administration official, Republican lobbyist and lawyer, sentenced to one year in prison in 2009 for obstruction in the Jack Abramoff investigation.

Paul Pogue is a construction company owner and major Republican donor who was sentenced to three years of probation for tax evasion. According to the FEC, Pogue has donated $85,000 to the Trump-RNC Victory Fund and nearly $150,000 directly to the Republican National Committee so far this election cycle.