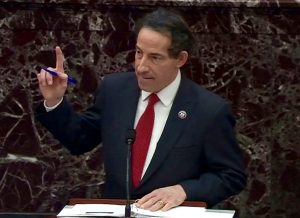 This afternoon the Senate impeachment trial of Donald J. Trump commenced, the second for the former President, and only the fourth such trial in US History.

The trial follows the impeachment, or indictment, of Trump by the US House of Representatives on January 13, 2021, on one article of "incitement of insurrection" for the violent assault at the United States Capitol on January 6, 2021.

The case is being prosecuted by House Impeachment Managers, and will be defended by the President's personal counsel. Both sides have presented pre-trial briefs on their arguments.

After procedural votes, the first day of debate centered on the issue of constitutionality.

The Prosecution
The House Managers, appointed by Speaker Nancy Pelosi, include nine members of the US House, all former litigators, who will present the case against Trump. 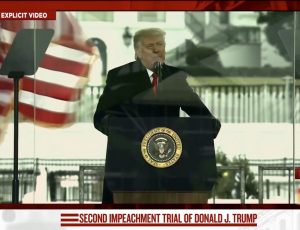 Similar to lawyers in a courtroom, the impeachment managers provide opening and closing statements, present the facts collected by the House investigations, and cross-examine witnesses.

Congressman Jamie Raskin (MD)
Raskin, a constitutional scholar who began drafting the article of impeachment against Trump the morning after the January 6th riot at the Capitol, will be the "Lead Manager" for the prosecution.

Raskin served as a professor of constitutional law at American University for more than 25 years, where he also founded the Marshall-Brennan Constitutional Literacy Project. He was elected to represent Maryland's 8th congressional district in 2016.

Congressman Joe Neguse (CO)
Neguse, an attorney and the son of two immigrants from Eritrea, became the first African American to represent Colorado in the US House upon his election in 2018. A rising star among House Democrats, he Co-Chairs the Democratic Policy and Communications Committee (DPCC), and, at 36, is the youngest lawmaker ever to serve as an impeachment manager in a Senate trial. 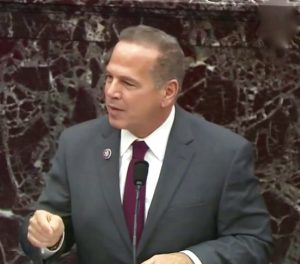 Congressman David Cicilline (RI)
A six-term member of Congress, Cicilline is a member of the Foreign Affairs Committee and chairs the Antitrust Subcommittee of the House Judiciary Committee. A former DC public defender, he helped write the article of impeachment with Raskin and Congressman Ted Lieu.

Cicilline also previously served as Mayor of Rhode Island's largest city, Providence, and when elected in 2010, became only the fourth openly gay person elected to Congress.

Congresswoman Diana DeGette (CO)
DeGette is a veteran of this process, having presided over the House debate during Trump's first impeachment. In her thirteenth term, she is the longest-serving House member among the impeachment managers, and has served in Democratic leadership three times as Deputy Whip. Prior to being elected in 1996, she was a civil rights lawyer in Denver.

Congressman Joaquin Castro (TX)
Now in his fifth term, Castro is a member of the Permanent Select Committee on Intelligence, which led the investigation in Trump's first impeachment. He also serves on the Foreign Affairs and Education and Labor Committees, and is a former chair of the Congressional Hispanic Caucus. He served in private practice before Congress, and is twin to brother Julian Castro, who ran for president in 2020. 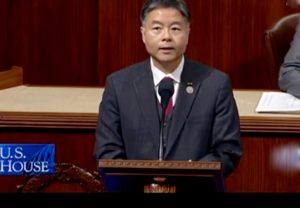 Congressman Ted Lieu (CA)
A former active duty Air Force officer who served as a prosecutor in the Judge Advocate General's Corps, Lieu helped author the Article of Impeachment with Raskin and Cicilline. He reportedly started texting Judiciary Committee colleagues about drafting impeachment articles against Trump while the Capitol siege was still ongoing.

Elected in 2014, he also serves on the Foreign Affairs Committee, and is Co-Chair of the Democratic Policy and Communications Committee (DPCC).

Congressman Eric Swalwell (CA)
A member of both the Intelligence and Judiciary Committees, Swalwell is also a Co-Chair of the Democratic Policy and Communications Committee (DPCC).

A former 2020 presidential candidate, he is a high-profile member of Congress online and on air, and a vocal Trump critic. Prior to being elected in 2014, he served as a prosecutor and deputy district attorney for Alameda County in California. 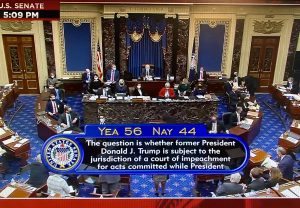 Congresswoman Stacey Plaskett (USVI)
Plaskett is serving her fourth term as the representative from the Virgin Islands, and is a member of the Ways and Means, Budget, and Agriculture Committees. As a Member from a US Territory, she does not have a vote in Congress, but brings a wealth of litigation experience as a former Assistant District Attorney in the Bronx DA's office and as a Senior Counsel at the Department of Justice.

Congresswoman Madeleine Dean (PA)
Dean, a member of the House Judiciary and Financial Services Committees, was first elected in 2018 after serving as the Executive Director of the Philadelphia Trial Lawyers Association and working in private practice as a lawyer. Dean was on the House floor when protesters stormed the building on January 6th.

The trial will commence Wednesday at noon.