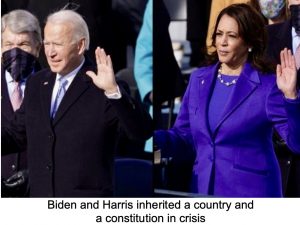 Last Friday marked the two-year anniversary of the Biden-Harris Administration.

When the President and Vice President were sworn in January 20, 2020, our country was suffering through an ongoing global pandemic, economic turmoil, a climate crisis, a 20-year war, and an existential threat to democracy.

Nine million people were out of work, hundreds of thousands of small businesses had closed their doors, and the number of guns on our streets reached record numbers.

The country was torn apart by political and racial divisions, brought to the precipice of a constitutional crisis created by outgoing President Donald Trump -- in the form of an attack on the US Capitol and assault on the integrity of our electoral process.

President Joseph Biden and his administration, the most diverse in history, have reversed that course and helped heal a wounded nation. Here is how they have delivered for the American people.

Delivering Results for the American People
• Lowered Prices: Costs are coming down on everything from cars to dishwashers. Gas prices are down more than $1.60 compared to the previous year, and inflation is now at its lowest level since October 2021. Insulin is now capped at $35 per month for seniors and the President’s actions are saving 13 million families $800 per year on their health insurance premiums. 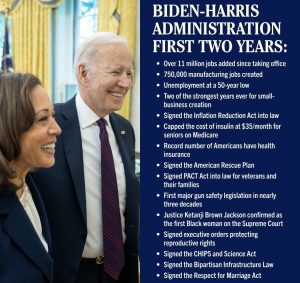 • Created Millions of Jobs: 2021 and 2022 were the two strongest years of job growth in US history. Nearly 11 million jobs have been created and 750,000 of them are in manufacturing -- a sector with an outsized impact on the economy,

The unemployment rate is near a 50-year low. Black and Hispanic Americans and people with disabilities are experiencing record-low unemployment.

• Restored America’s Global Leadership: President Biden restored our global alliances and rallied partners across the world to stand up to Russian aggression and support Ukraine.

• Confirmed Historic Judges: President Biden’s confirmed judicial nominees are the most diverse in history, and the President appointed the first Black woman to serve on the US Supreme Court, Justice Ketanji Brown Jackson. 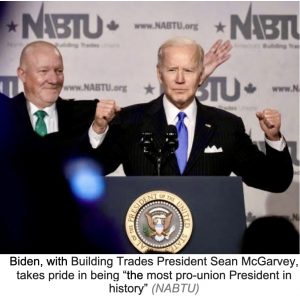 Investing in Communities Left Behind
• Putting Shovels in the Ground: To date, the Administration has announced funding from the Bipartisan Infrastructure Law for 6,900 specific projects, reaching over 4,000 communities across all 50 states, DC, and the territories.

• Leading a Manufacturing Boom: Thanks to the President’s economic agenda, private companies have announced nearly $300 billion in investments across the US in semiconductors and clean energy. These investments are creating thousands of good-paying jobs, revitalizing communities left behind, and helping us reach our climate goals.
* Intel is investing $20 billion in Ohio
* Micron is investing $100 billion in New York
* TSMC is investing $40 billion in Arizona
* Hanwa Q CELLS announced the largest single solar investment in US history in Georgia

Leading His Party
While Biden's approval ratings have yet to catch up to his accomplishments, voters registered their approval where it counts -- at the ballot box.

Note: President Joseph Biden will be delivering the State of the Union Address on February 7, 2023 at 9:00pm.