With the midterms behind us, the focus turns to the 2020 Presidential election and the lengthy list of Democratic contenders vying to challenge the tumultuous Mr. Trump -- or the Republican nominee. 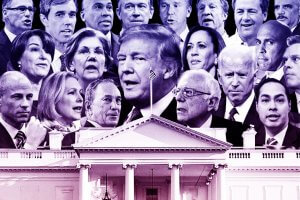 While the country awaits the future of the current presidency and the outcome of the Mueller investigation, presidential hopefuls have been testing the waters in early primary states, racking up support through fundraising for candidates in the last election and for their own political action committees.

Some are using book tours as a vehicle for voicing their philosophies and increasing their profile in battleground states nationwide, while others are using their positions on prominent congressional committees to heighten their visibility on air and online.

Although the numbers of candidates haven't shifted, the major players have. All are included in our update.

Those who have taken themselves out of the running include New York Governor Andrew Cuomo, former VP Candidate and US Senator Tim Kaine, former Massachusetts Governor Deval Patrick, businessman and philanthropist Tom Steyer, actor Dwayne "The Rock" Johnson, and media mogul Oprah Winfrey.

Latest Standings
An early straw poll of members of the liberal group, MoveOn, shows the fight for the progressive vote is still wide open.