Political Action Committees (PACs) play a major role in the funding, and influence, of political elections.
The question is -- which ones, and those behind them, are playing the biggest influence in the 2018 elections? 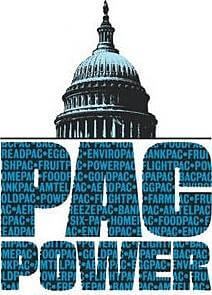 Power of PACs
PACs were born into the American electoral process almost 75 years ago, when labor's Congress of Industrial Organizations (CIO) formed the first one to raise money for the 1944 re-election of President Franklin D. Roosevelt.

Their power and permanent place in politics has grown steadily, but the last decade ushered in an era of unprecedented political giving with the rise of "Super PACs" following the 2010 Supreme Court rulings that took the limits off of "independent expenditure" campaigns. 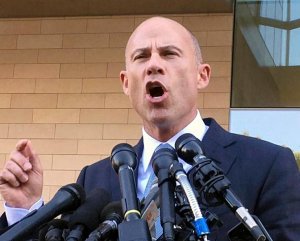 Organized as "separate segregated funds" apart from general corporate or treasury funds, a connected PAC allows a business, industry, labor or ideological organization to contribute above and beyond individual limits to candidates and issue campaigns.

Likewise, an individual or group other than a party committee may form a non-connected PAC which is unconstrained by the fundraising limitations of donors affiliated with a connected organization, and may accept individual contributions from the general public.

PACs may contribute to a candidate campaign ($5,000 per primary, general or special election), other PACs ($5,000 annually), and national party committees ($15,000 annually).

Who Gives? Top PACs to Candidates
In the midterm elections, PACs have directly contributed $352 million to US House candidates, and $95 million to US Senate campaigns.

PACs, particularly pro-business committees under a Republican-controlled House, overwhelmingly give to incumbents as, on average, 90+% will be reelected. Ideological groups are more likely to take a chance on open seat and challenger candidates running for the first time.

2018 PAC Expenditures by Industry (as of 10/16/18). *Does not include Independent Expenditures

Leadership PACs are formed by current office holders to help other elected officials and candidates, and are also often an indication of higher ambitions.

In addition to the top ten (above), many potential presidential contenders have PACs, including: 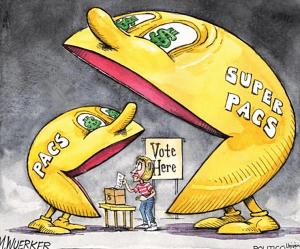 Super PACs are committees that makes expenditures independent of campaigns for the purposes of overtly advocating for or against candidates -- often in the form of television, mail or other communications.

Super PACs may accept unlimited contributions from individuals, corporations and labor organizations, but are prohibited from contributing directly to, or coordinating with, candidate campaigns.

In the 2018 elections, 2,217 groups organized as super PACs have reported total receipts of approximately $1.1 billion and total independent expenditures in excess of $628 million.

According to the Center for Responsive Politics, the 2018 midterm elections are slated to cost $5 billion -- making it by far the costliest congressional election cycle in U.S. history.

Until the system changes, play ball.

Related
DemDaily: What Are The Limits? 10/5

August 9, 2017 In following on yesterday’s Voting Rights Act Daily, we took a look at how Diversity in the US Congress has changed since the landmark legislation was signed into law in 1965...