Evolution
Language is an ever-evolving social creation that continues to adapt to societal views, events, expression and history. 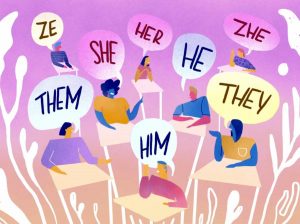 Among the most prominent examples in recent years is the adjustment of the English language to be more inclusive of transgender and nonbinary individuals.

One of the most important elements of this movement is a heightened appreciation of the use of personal pronouns.

In recent years the introduction of gender-neutral pronouns (ex: they, them, theirs) as alternatives to the more conventional "he" and "she" has been the subject of much debate as corporations, institutions, schools and even the US Congress have embraced new terms in the name of diversity.

History
Public discourse around gendered and gender neutral pronouns has been around for as long as the English language. In the 12th and 13th centuries, the Middle English pronunciations of pronouns for men and women were practically indiscernible, resulting in effective conversational gender neutrality until the development of the pronoun "she". The term "Ou", though not widely used, developed as early as 1792 to serve as a gender neutral pronoun. Pronouns became a particularly hot topic during the first-wave feminist movement of the late 19th century as suffragettes sought to include women under male-centric legal definitions, pushing to make "he" a gender neutral pronoun. Male judges, however, rejected this interpretation.

In 1858, attorney CC Converse suggested the use of "thon" - a shortening of "that one" - as a gender neutral pronoun. "Thon" was listed in the Merriam-Webster dictionary until 1961, after it fell out of use.

"They," the most common gender neutral pronoun used today, was used as a singular pronoun as early as 1375 and can be found in the works of both Chaucer and Shakespeare. Its use as a gender neutral term has expanded rapidly in the last decade.

In 2015, the American Dialect Society voted the singular, gender neutral "they" as its Word of the Decade. In 2019, Merriam-Webster became the last major dictionary to include a nonbinary definition of "they", following the lead of the Oxford English Dictionary and guides such as the Associated Press Stylebook and the Chicago Manual of Style in 2017.

Culture
The advancements in linguistics reflect multiple cultural trends and events that have shed a light on issues of gender inclusivity and the manner in which individuals who do not identify with the gender they were assigned at birth wish to be addressed. 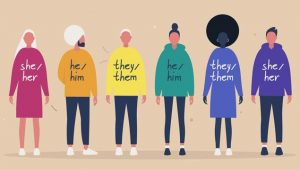 The "Me Too" movement, an increase in hate crimes against transgender individuals, the influence of prominent public transgender and genderqueer figures, and the election of numerous LGBTQ+ officials at all levels of office, have increased the awareness and need for more appropriate and respectful reference.

Although behind other countries in the transition, the US is making up for lost time. In January, the US House of Representatives, led by Speaker Nancy Pelosi and Rules Committee Chair Jim McGovern, approved gender-neutral language in the official House rules and established a permanent Office of Diversity and Inclusion.

As part of Biden's policy of tackling discrimination against LGBTQ+ people, individuals can now select gender-neutral pronouns when contacting the U.S. government. People who identify as non-binary - neither male nor female - can now select the gender-neutral title "Mx." on the White House website's contact page, which also added a drop-down list of personal pronouns, including "they/them." 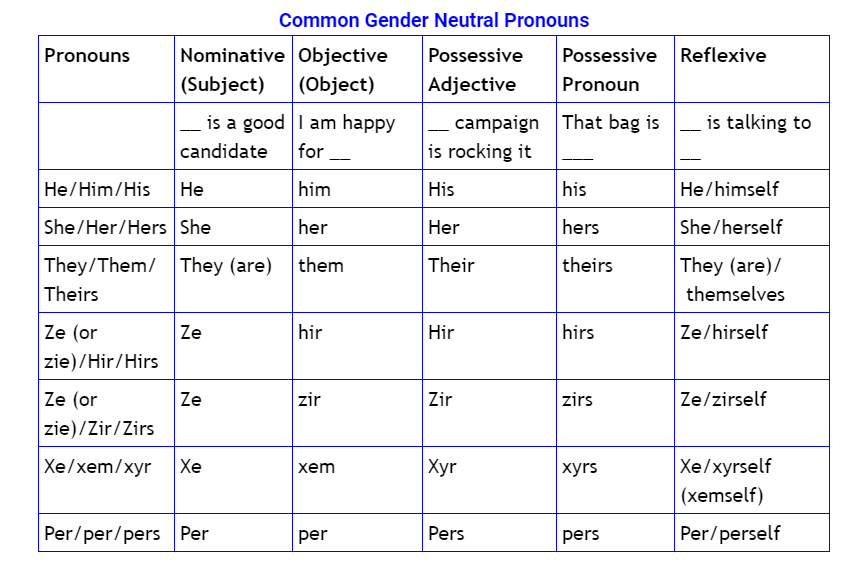 Do's and Don'ts
Don't:
* Ask for someone's pronouns without providing your own. This can cause discomfort and create the impression that you are asking someone to out themselves as transgender, nonbinary, or gender fluid.
* Out a transgender or nonbinary person without their permission.
* Say "preferred" pronouns. Although this term is very common and not everyone has a problem with it, it implies that gender is a preference, rather than someone's identity. Instead, you can simply say "pronouns".
* Ignore someone's wishes regarding their name and pronouns. 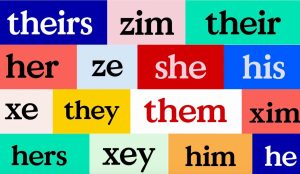 Do:
* Introduce yourself with your pronouns when meeting someone. By doing so, you are providing the opportunity for others to comfortably share their pronouns.
* When in doubt, refer to someone by their name, rather than "he" or "she." If you do not know someone's name, the gender neutral pronouns "they/them/theirs" are considered among the most respectful options.

* During meetings, encourage everyone to introduce themselves with their pronouns to help normalize communications about pronouns in the workplace.
* Quickly correct yourself and apologize if you use the wrong pronouns.
* Ask questions respectfully and privately.
* Respect someone's wishes regarding their name and pronouns.

Using the right pronouns is a matter of respect and consideration. Everyone has a right to identify themselves, and no one deserves to feel disrespected as a result of their identity. The choice is theirs, not yours.