DemDaily: The Peaceful Transition of Her Power

DemDaily: The Peaceful Transition of Her Power

Congresswoman Nancy Pelosi, the only woman in history to serve as the Speaker of the United States House of Representatives, is relinquishing the gavel -- one she has wielded with unmatched legislative prowess, poise and power for nearly two decades. 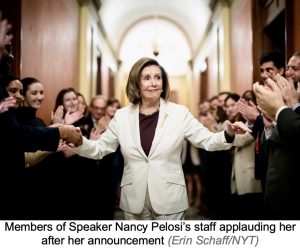 “For me, the hour has come for a new generation to lead the Democratic caucus that I so deeply respect," said Pelosi in a thoughtful and sometimes emotional speech before her colleagues in the House Chamber last Thursday, November 17.

The announcement follows the 2022 midterm election in which Democrats narrowly lost their majority but defied the traditionally devastating losses suffered by the party in the White House.

It also delivered on Pelosi's commitment following the 2018 midterms, when Democrats flipped forty seats to take control of the House, that she would not seek the speakership beyond 2022 in deference to the next generation of leadership.

Pelosi broke the glass ceiling when elected Speaker of the House in 2007. Democrats lost the majority in 2011, but she regained the gavel in 2019 when Democrats retook the majority following the 2018 midterms.

She became the first Speaker since Sam Rayburn in 1949 to reclaim the gavel, cementing the progressive Democrat's place in history as the most powerful woman in modern American politics.

In Thursday's speech, Pelosi paid tribute to her political roots as the daughter of a "proud New Deal" Congressman and later Mayor of Baltimore Thomas D'Alesandro. 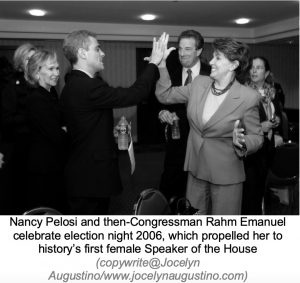 "When I first came to the (US House) floor at 6 years old, never would I have thought that someday I would go from homemaker to House speaker."

Pelosi dedicated her early years to raising five children with husband Paul in San Franciso before rising from volunteer to California Democratic Party Chair in 1981.

She was first elected to Congress in a 1987 special election, at age 47, and is now in her 18th term representing California's 12th CD. "When I came to the Congress...there were 12 Democratic women. Now there are over 90. And we want more," said Pelosi.

Her historic leadership run began with her election as House Minority Whip in 2001, becoming the first woman to hold that position. In 2006, as Minority Leader, Pelosi marshaled the well-disciplined Democratic response to then-President George Bush's assault on Social Security. She was also a vocal critic of the president's prosecution of the Iraq War, maintaining that Democratic congressional wins under Bush were in part a rebuke of his administration's warmongering policies.

In 2008, working with President Barack Obama, she effectively negotiated across the aisle to pass bailout packages in response to the economic crisis of the Great Recession.

Among her greatest legislative achievements, as credited by President Barack Obama, was navigating passage of the Affordable Care Act after Democrats lost their veto-proof majority in the Senate in 2010. 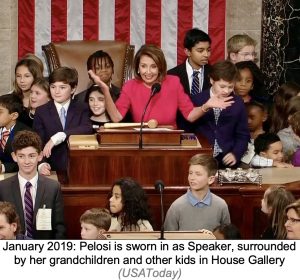 Pelosi's third speakership was marked by her antagonistic relationship with President Trump. She twice authorized articles of impeachment against the president, and frequently used her platform to rebuke Trump for his administration's failures.

In her fourth term with the gavel, Pelosi oversaw passage of the American Rescue Plan in response to the economic fallout from the COVID-19 pandemic. Her tenure also saw passage of the Bipartisan Infrasture Law, the CHIPS and Science Act and the most significant gun safety law in nearly thirty years.

She has also been praised by President Joe Biden for shepherding her members through passage of the bipartisan Inflation Reduction Act, which includes the highest levels of climate spending in history.

Of the 2022 midterm election results, Pelosi said, "Last week, the American people spoke, and their voices were raised in defense of liberty, of the rule of law and of democracy itself. With these elections, the people stood in the breach and repelled the assault on democracy. They resoundingly rejected violence and insurrection, and in doing so gave proof through the night that our flag was still there...A new day is dawning on the horizon, and I look forward, always forward, to the unfolding story of our nation."

Pelosi's second-in-command, House Majority Leader Steny Hoyer (MD), is also ceding his leadership position, as is Congressman James Clyburn (SC), who is stepping down from his position as Whip to continue instead as Assistant Leader.

All three, who are in their 80s, will continue to serve in Congress and as advisors to the slate of new leaders who will be elected by the Democratic Caucus November 30th.

August 30, 2021 The US Senate currently stands at 50 Democrats, including two Independents who caucus with the Democrats, to 50 Republicans. As Vice President Kamala Harris serves as the President...