80 cents. That is the amount working women get paid for every dollar paid to their male counterparts. 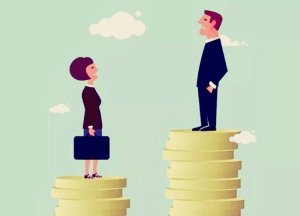 That means when her male counterpart retires at age 60 after 40 years of work, a woman would have to work nearly 10 additional years - until almost age 70, which is past Social Security's full retirement age - to close this lifetime wage gap.

The Wage Gap
Although women in the United States have made enormous gains in educational attainment and labor force involvement in the last several decades, when it comes to the issue of unequal pay for equal work, we have a long way to go.

The Myths
Why the disparity? Common myths abound, but most are easily shot down.

Women are paid less because they work more low-wage jobs
According to the National Women's Law Center, in 2016, women made up nearly two-thirds of the 24 million workers in low-wage jobs that typically pay less than $11.50 per hour. While it's true that women are more likely to work in lower-paying fields like education and health care, the pay gap still persists within those fields. 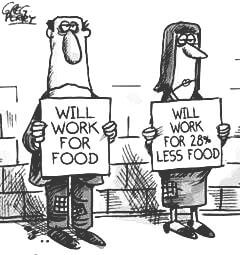 "Women's" jobs often pay less just because they are held by a woman. A study of more than 50 years of data revealed that when women moved into a field in large numbers, wages declined, even when controlling for experience, skills, education, race and region.

Women are paid less because of time off to have children
Women's compensation does suffer when they return to work after having children. Even in their first year out of college, however, childless women earn 93% of what their male counterparts earn, even if they had a similar G.P.A. and were working in the same fields.

Women are less educated
Untrue. More women than men have earned bachelor's and master's degrees in the last thirty years and, in the last ten, earned more doctoral degrees.

Women don't pursue advancement
A 2018 study published in the Harvard Business Review found that women are asking for raises as often as men, though they are less likely to get them. 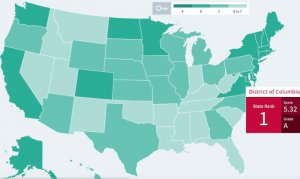 The States
A 2018 study by the Institute for Women's Policy Research (IWPR) graded each state on two composite indices related to women's economic status: the Status of Women in the States Employment & Earnings Index and the Poverty & Opportunity Index.

The District of Columbia, Maryland, and Massachusetts held the top three places on the Employment & Earnings Index. South Dakota saw the greatest improvement among the states, earning a C+ in 2018, up from a D in 2015. Mississippi, West Virginia, and Idaho are the worst states for women on the Employment & Earnings Index, all receiving the lowest grade, F.

The Fix
Last week the US House of Representatives passed, largely along party lines, H.R. 7, The Paycheck Fairness Act.

It also attempts to close loopholes in the Equal Pay Act of 1963, passed over 50 years ago, that "required" that men and women receive equal pay for equal work.

The Act, which now proceeds to the US Senate for consideration, is not expected to pass the Republican-controlled upper chamber.

At the current pace of change, women will not reach pay equity until 2059.  This is a family issue, an economic issue and a civil rights issue.

April 23, 2019 This week marked the 49th anniversary of Earth Day, the annual event held to demonstrate support for environmental protection. First held in 1970, it was considered the launch of...