As a part of DemList's mission to profile the good work of the democratic family, we are happy to highlight one of the Democratic National Committee's most important and fastest growing constituency organizations -- the Democratic Municipal Officials (DMO).

DMO represents the interests of our country's largest coalition of Democratic officials -- the 40,000+ city council members, mayors, and other elected officials from cities, towns, townships, villages and boroughs of all sizes.

Founded in 1988 as a non-profit (527) political organization, DMO hold three seats, including an Executive Committee seat, on the Democratic National Committee.

Any incumbent municipal official who self-defines as Democrat, even if they hold non-partisan office, can become a member of Democratic Municipal Officials.

The DMO also helps candidates running for local office through its Blue Star Candidate program, which shines national attention on local races where a pivotal seat can be won or held, and where a victory would swing Democratic control to a Council or Board. Candidates are referred through State Chapters.

Resources
Democratic Municipal Officials has more than 6,000 active members nationwide, and chapters in over 30 states that host meetings, conduct events and forums.

DMO offers a suite of resources, including political trainings, education, webinars, strategy and policy counsel to its members, as well as an advocacy platform through the national party organization. 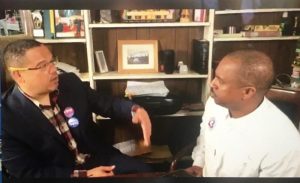 DMO's Political Council is a think tank of award-winning political strategists, consultants, campaign software and data gurus who are available to advise and guide members.

Political consultants can also signup to be listed in the DMO Political Resource Guide, be highlighted as a preferred provider, and apply for Political Council Leadership Membership.

Board Partners
DMO partners with corporate, labor and policy organizations to promote their participation and mutual interests, and to fund the important work and resources DMO provides. 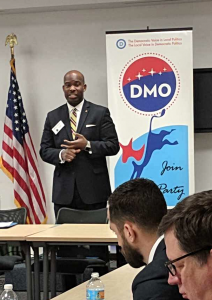 DMO's Board of Directors is comprised of elected officials from many of America's largest and most prominent cities. Its newly elected President is Detroit City Council Member Scott Benson, an Urban Planner and leader in community and economic development in Southeastern Michigan.