All eyes are on the Virginia Governor's race, the first competitive statewide election since President Biden took office, which is now just two weeks away.

With only two "off-election" gubernatorial races in 2021, and with incumbent New Jersey Governor Phil Murphy (D) holding a comparatively comfortable 9% lead in his reelection contest, the focus is on the future of the Commonwealth.

The Virginia race between former Governor Terry McAuliffe (D) and Republican nominee Glenn Youngkin, who are virtually tied in polling, is being closely watched as a critical harbinger of the mood of the electorate going into the 2022 midterm elections.

A Trafalgar Group poll, conducted October 11-13, 2021, showed former Governor Terry McAuliffe (D) and Republican candidate Glenn Youngkin in a statistical dead-heat at 47.5% to 48.4% respectively (Margin Of Error +/- 3%). Undecided voters accounted for 2.8% of the voters, with another 1.3% planning to vote for another candidate or write-in. 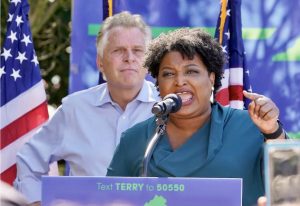 Youngkin, however, is walking a delicate tightrope between appealing to Trump voters while keeping the former President, who lost the state by 10% in 2020, at bay until after the election.

Youngkin skipped a rally in his honor last week which featured former Trump Advisor Steve Bannon, with Trump calling in via video to rouse the crowd for Youngkin.

Attendees now famously recited the Pledge of Allegiance to a flag advertised as one that was used by an insurrectionist at the January 6th riot at the US Capitol. "The Call" is now featured in a McAuliffe attack ad, one of several tying Youngkin to Trump and his policies.

In the money race, McAuliffe outraised Youngkin in September, bringing in $12.5 million to the Republican's $7 million.

McAuliffe also received more small donations than Youngkin did, getting more than 41,000 donations of $100 or less versus Youngkin’s 13,000, during the period.

The total fundraising for both candidates has now exceeded $88 million, far surpassing the $66 million total raised in the 2017 governor's race.

According to the nonprofit Virginia Public Access Project, McAuliffe has raised a total of $45.3 million, with $7.8 million on-hand, compared to Youngkin's $43.4 million haul and $3.5 million on-hand at the end of last month.

Independent candidate Princess Blanding reported raising $8,367 in September and has $6,339 cash on hand.

This race is critical to all Democrats and voters. Contribute what you can here Terry HERE 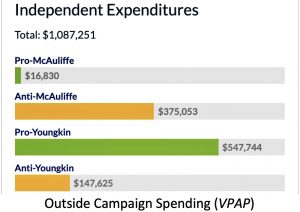 Outside spending, or independent expenditures, have been comparatively minimal to date, totaling just over $1 million as of the end of September, with 85% of that pro-Youngkin or anti-McAuliffe.

Almost half of that, $450,327, came in support of Youngkin from the conservative Americans for Prosperity, which announced a 'six-figure' ad campaign this month. The National Right to Life Committee State Fund spent $64,152 in support of Youngkin, while the American Principles Project invested $278,500, and Women Speak Out Virginia $72,700, against McAuliffe.

It's gotten ugly, with ads that are debating national political issues as one with Virginia.

According to AdImpact, since the general election began, Democrats have spent $22.8 million on TV, radio and online ads, while Republicans have dropped $20.9 million, with the McAuliffe campaign ($21.4 million) and the Youngkin campaign ($20.8 million) making up the bulk of this spending. 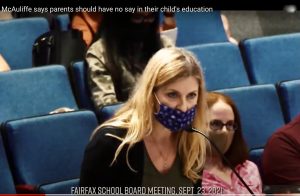 More than 60% of the spending has been on ads that have at least some negative comparisons or attacks.

Four of the five most expensive ads for the McAuliffe campaign have been negative, with a particular focus on abortion, after Youngkin was caught on tape promising to go "on offense" to restrict access to abortion after winning.

Although abortion is legal in Virginia, the issue is at the forefront of the national debate after Texas passed a ban on abortion that is in the midst of a legal tug-of-war that threatens to contribute to overturning Roe v. Wade.

Schools are also a key focus of ads amid the national discussion on curriculum, critical race theory and mask mandates. 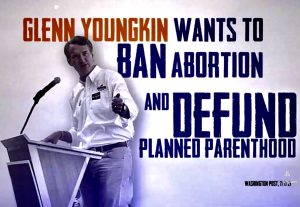 Youngkin's most aggressive attack ad shows a clip from the final debate of the race September 28th, where McAuliffe stated, “I don’t think parents should be telling schools what they should teach.” The exchange involved the issue of censoring materials in the schools, but paints McAuliffe as opposed to parental rights.

Since October 1st, Democrats have outspent Republicans in the race, $7.7 million to $4.8 million.

In future spending for October 19th through November 2nd, however, Republicans have booked $1.4 million compared with $885,000 for Democrats.

Early Vote is underway! For the first time in a gubernatorial election, Virginia voters have the option to participate in in-person early voting or no-excuse mail voting.

July 17, 2018 This morning, as I prepared to write today’s Daily, an incredible thing happened. I was working at home and my dog, Jia, started barking. From the window there didn’t...