President Trump announced his nomination for the country's highest court today, and with it, the beginning of a confirmation battle that will determine the ideological direction of the Supreme Court of the United States (SCOTUS) for the next several decades.

The Nominee
Brett Kavanaugh, 53, who currently serves on the Court of Appeals for the District of Columbia Circuit, is the President's pick to replace Justice Anthony Kennedy, who announced two weeks ago, he would be retiring from the bench. 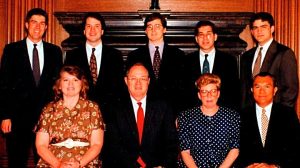 A conservative with a long history of ties to the Republican establishment, Kavanaugh grew up in Maryland, and attended Yale University and Yale law school. He clerked for Justice Anthony Kennedy alongside Neil Gorsuch, who was appointed to the Supreme Court last April.

As Associate Counsel to Independent Council Kenneth Starr, he worked on the Whitewater and Monica Lewinsky investigations, and helped draft Starr's report to Congress laying out grounds for the impeachment of President Bill Clinton.

After briefly serving in private law practice, he worked in the Bush White House from 2001-2006 as Counsel, then as Staff Secretary before being confirmed as a federal judge.

The Swing Vote
While Justice Kennedy was considered the only swing vote on the court, sometimes voting with the four liberal justices on social issues like gay marriage, Kavanaugh's appointment would solidify the conservative majority and endanger or overturn key civil rights decisions.  At the forefront of those is Roe v. Wade, the 1973 decision that legalized abortion.

With a 51-49 Republican majority in the US Senate, it will require the vote of all Democrats, including a handful in red states that are up for election, as well as two Republicans, to defeat Kavanaugh's nomination.

Senators Susan Collins (R-Maine) and Lisa Murkowski (R-Alaska), who have occasionally sided with Democrats on critical votes, are considered the crucial swing votes in the fight. 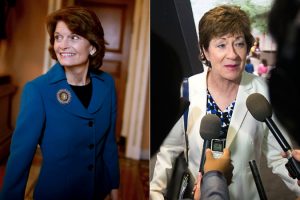 A lifetime appointment, most Justices serve until retirement or death (average tenure is 16 years), at which time the current President of the United States (POTUS) nominates a replacement.

In the history of the court only six of 113 Judges have been women or minorities.

The Process
The Senate Judiciary Committee will hold a hearing, expected to be scheduled in the next month, to debate the nominee's qualifications, and then vote on advancing the nomination to the full Senate for debate and a vote.

The average time between a Justice's nomination and confirmation is approximately 11 weeks. If confirmed, Kavanaugh would be seated in time for the opening of the court's next term this October.

In a 2009 Minnesota Law Review article, Kavanaugh wrote, "I believe that the President should be excused from some of the burdens of ordinary  citizenship while serving in office ...   the indictment and trial of a sitting President, moreover, would cripple the federal government, rendering it unable to function with credibility in either the international or domestic arenas. Such an outcome would ill serve the public interest, especially in times of financial or national security crisis."

Every vote - at the ballot box or on the High Court - makes a difference.