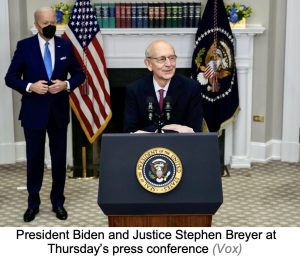 Breyer's pending departure clears the way for President Joe Biden's first Supreme Court nominee and the opportunity to appoint a younger, similarly liberal successor to the court, which is now dominated by a 6-3 conservative majority.

Breyer has been under public pressure to retire prior to the November midterm elections for fear that Republicans may take control of the United States Senate, the body responsible for confirming justices to the court.

It also provides Biden with a well-timed opportunity to fulfill his campaign promise of confirming the first Black woman on the Supreme Court.

The high-profile nomination and confirmation process is expected to play out over the next month. In the interim, the speculation over the list of potential nominees are immediately being vetted by the public. 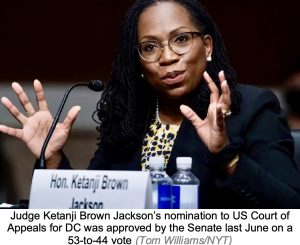 The Contenders
Ketanji Brown Jackson
Jackson, 51, currently sits on the US Court of Appeals for the District of Columbia, the country's second most powerful federal court.

Nominated to the court by Biden, she successfully went through the Senate confirmation process last June, approved by all 50 Democrats and three Republican Senators - Susan Collins (ME), Lindsey Graham (SC) and Lisa Murkowski (AK). Three other GOP Senators did not vote.

As an appellate judge, she signed onto the opinion ordering the disclosure of Trump White House documents being sought by the January 6 Committee.

Jackson previously served on the US District Court in DC where she ruled on a number of high-profile cases, including her 2019 decision ordering Trump White House Counsel Don McGahn to comply with the House’s subpoena seeking his testimony over Trump’s efforts to obstruct the Russia investigation. In the decision, she famously wrote, “Presidents are not kings,” adding that current and former White House officials owe their first allegiance to the Constitution.

Jackson, who clerked for Justice Breyer during the Supreme Court’s 1999-2000 term, graduated from Harvard College and Harvard Law School. She was on former President Barack Obama's shortlist for the court in 2016. 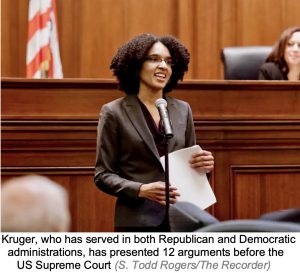 Leondra Kruger
Kruger, 45, is the youngest person to be appointed to the California Supreme Court, nominated by California Governor Jerry Brown and confirmed in 2015.

In 2013, Kruger became a Deputy Assistant Attorney General at the US Department of Justice's Office of Legal Counsel. Her work there earned her the Attorney General’s Award for Exceptional Service, the department’s highest award for employee performance, in 2013 and 2014.

She previously worked From 2007 to 2009 as an assistant to the United States Solicitor General and from 2010 to 2011 as Acting Deputy Solicitor General, the first Black woman to hold the role. During that time she argued 12 cases before the US Supreme Court on behalf of the federal government.

J. Michelle Childs
Last month, Biden nominated Childs, 55, to the US Court of Appeals for the District of Columbia Circuit, which remains pending. She previously served as a state court trial judge on the South Carolina Circuit and as the Deputy Director of the South Carolina Department of Labor, Licensing and Regulation, and as a Commissioner on the South Carolina Workers' Compensation Commission. She is a graduate of the University of South Carolina School of Law and has as a major advocate House Majority Whip James Clyburn. 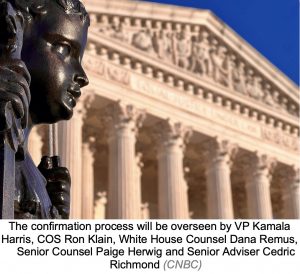 Wilhelmina “Mimi” Wright
Wright, 57, has served on US District Court for the District of Minnesota since 2016. She previously was an Associate Justice on the Minnesota Supreme Court from 2012 to 2016. Appointed by Governor Mark Dayton, she was the first Black woman to join the court. Wright received her undergraduate degree from Yale and her J.D. from Harvard Law School.

Other contenders include:
US Circuit Judge of the US Court of Appeals for the Second Circuit and former New York Public Defender Eunice Lee, whom Biden nominated to the Second Circuit on the recommendation of Senate Majority Leader Chuck Schumer.

US Circuit Judge of the US Court of Appeals for the Seventh Circuit Candace Jackson-Akiwumi, 42, and civil rights attorney and former President and Director-Counsel of the NAACP Legal Defense and Educational Fund Sherrilyn Ifill, 59.