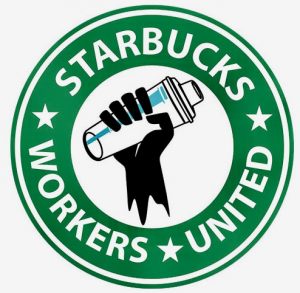 The victory for Starbucks Workers United was 35 years in the making and is a closely watched one in what union leaders hope is the launch of a new era of growth for the labor movement.

While the union movement has long been a significant political power in the United States, its numbers have been declining -- now making up just 11% of the country's workforce.

Starbucks, founded in 1971 in Seattle, Washington, is the world's largest coffeehouse chain with close to 34,000 stores in 80 countries, 15,500 of which were located in the United States. Out of Starbucks' U.S.-based stores, o8,900 are company-operated, while the remainder are licensed.

About a third of Starbucks' Chilean workforce is unionized, as well as 450 workers in New Zealand and one store in Canada. Although the first organizing drive in the US started in 1985, the company's longstanding anti-union efforts have deterred successful campaigns. 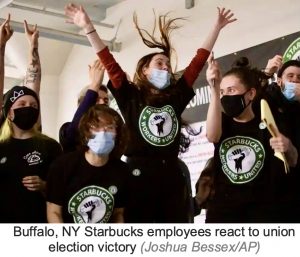 The Buffalo drive, which started in August 2021 with the petition of three stores to unionize with Workers United, a division of the Service Employees International Union, was no exception.

Starbucks dispatched executives and managers from around the country to work in the three cafés, a tactic pro-union workers said was meant as a way to intimidate them and spy on them.

On November 4th, Starbucks Workers United filed an unfair labor practice charge with the National Labor Relations Board (NRLB) over the company's conduct during the union campaign, which included shutting down two stores that were holding union elections and transferring workers to disrupt the voting units.

Despite additional efforts by Starbucks to halt the election, the counting moved forward last Thursday, December 9th, giving Starbucks Workers United its first local union. A second Buffalo location voted against unionizing and the results of a third is unsettled due to outstanding ballot challenges.

The threat to Starbucks is not the 27 baristas at the Elmwood Avenue Buffalo store, but inspiration provided by the high-profile challenge to the multinational corporation, particularly on the heels of the failed Amazon organizing campaign. 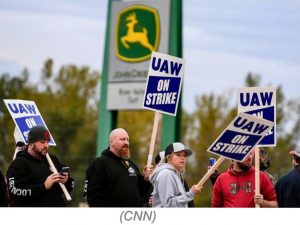 The intensified organizing effort is also no accident, following the unforeseen consequences of the pandemic in which Americans are rethinking their priorities and relationship to work.

As laid bare by the crisis, exhausted front-line and "essential" workers are feeling undervalued and frustrated with employers for failing to raise pay to match new profits and rising inflation.

The new shortage in the labor market in the wake of the coronavirus and the current supply chain crisis has emboldened workers to exercise newly found leverage to negotiate for better wages and working conditions.

Despite a historically dwindling membership, union sentiment is at a generational high in the US. An August 2-17, 2021 Gallup Poll showed Americans' approval of labor unions at 68%, the highest since 1965. 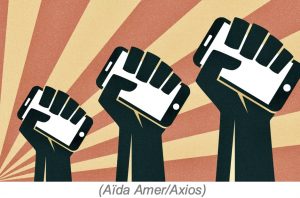 The New Labor Movement?
On November 9th, Workers United filed three more petitions to the NLRB for elections to represent workers at additional Buffalo area stores, followed by a petition for a store in Mesa, Arizona.

On December 13th, workers at two Boston area locations petitioned the NLRB to unionize with Workers United, citing the win in Buffalo as inspiration for organizing.

Two weeks ago, the NLRB ordered a new union election for Amazon workers in Bessemer, Alabama, based on findings that Amazon had improperly pressured warehouse staff to vote against joining the union in the first vote that took place in April.

The movement, it appears, is well underway.

A week from today we will know who the next US President will be, as well as which party will have control of the US Senate and, ultimately, the next Supreme Court nominee.

April 23, 2019 This week marked the 49th anniversary of Earth Day, the annual event held to demonstrate support for environmental protection. First held in 1970, it was considered the launch of...