In another dramatic scene in Act Two of The Mueller Investigation, Attorney General William Barr testified before the Senate Judiciary Committee Wednesday regarding his actions related to the Mueller Report.

Barr assumed oversight of the investigation when he was sworn in February 14, 2019 as the United States Attorney General, replacing Jeff Sessions, who was forced out by President Trump on November 7, 2018. 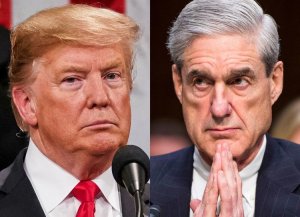 ACT ONE
May 17, 2017: Robert Mueller was appointed as the Special Counsel to oversee the investigation into Russian interference in the 2016 election, and into ties between President Trump's campaign and Russian officials.

Mueller, who served as Director of the Federal Bureau of Investigation (FBI) from 2001 to 2012, led a team of 19 lawyers and 40 FBI agents, intelligence analysts, forensic accountants and professional staff.

In total, the Mueller investigation resulted in 38 indictments or convictions, 215 criminal charges, and five prison sentences to-date. The investigation also triggered 14 additional investigations that were referred to other Justice Department offices, and are ongoing. 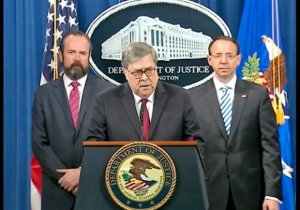 March 24th: Attorney General Barr released a four-page "initial review" of the Mueller report, addressed in a letter to the leadership of the US Senate and House Judiciary Committees.

Barr said that he and Deputy Attorney General Rod Rosensteinconcluded that "the investigation did not establish that members of the Trump Campaign conspired or coordinated with the Russian government in its election interference activities."

Barr also concluded that the evidence provided was "not sufficient to establish that the President committed an obstruction-of-justice offense."

Democrats immediately called for the full report, and Barr promised a redacted version would be sent to "a bipartisan group of leaders from several Congressional committees" in the following weeks.

March 27th: Special Counsel Mueller sent a letter to AG Barr expressing concerns over Barr's interpretation of the report. The letter, just made public by the Washington Post on April 30th, stated:

"The summary letter the Department sent to Congress and released late in the afternoon of March 24 did not fully capture the context, nature and substance of this Office's work and conclusions." 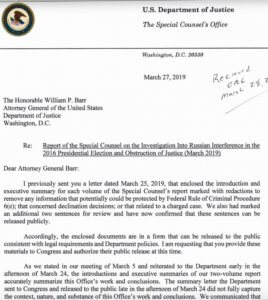 Adding that he communicated his concerns to the Department on March 25th following Barr's announcement, Mueller stated, "now public confusion over critical aspects of the results of our investigation" threatened to undermine the "full public confidence in the outcome."

Mueller reportedly reiterated those concerns again in a March 28th call to Barr.

April 3rd: The House Judiciary Committee, having not received the full report from Barr and the DOJ by the stated April 2 deadline, voted along party lines to approve a resolution authorizing a subpoena for the full report and any underlying evidence or materials.

April 9th & 10th: In Congressional hearings on other DOJ matters, Barr was asked about his conclusions regarding the Mueller report. When Senator Chris Van Hollen, of the Senate Appropriations Committee, asked Barr "Did Bob Mueller support your conclusion" on obstruction?

April 18th: Attorney General William Barr held a press conference to brief the public on the redacted version of the Mueller Report, an hour in advance of releasing it to Congress and the public.

Meanwhile, the New York Times reported that the redacted report was made available to White House attorneys in advance of Barr's announcement.

As the details of the redacted report were released, and the damning evidence against the President revealed, Barr was immediately condemned by legal experts for discrepancies in his "conclusions," and his deliberate mischaracterization that the President had been exonerated.

In fact, the report outlines in meticulous detail the obstruction of justice evidence, including where "the president engaged in second phase of conduct involving public attacks on the investigation, non-public efforts to control it, and efforts in both public and private to encourage witnesses not to cooperate with the investigation." 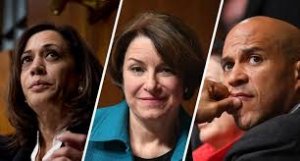 May 1st: Attorney General Barr testified before the Senate Judiciary Committee, at the center of a partisan exchange of debates and questions which grilled down on his authority, ethics and apparent attempts to protect the President.

The hearing was guided by Republican Committee Chair Lindsay Graham (R-SC), an ardent advocate of the President and Barr. Among the Committee members were three presidential candidates, Kamala Harris (D-CA), Amy Klobuchar (D-MN) and Cory Booker (D-NJ), who all called for his resignation.

The most forthright comments, however, came from US Senator Maize Hirono (D-HI), who blatantly accused Barr of lying and sacrificing his reputation to protect "the grifter and lier who sits in the oval office."

May 2nd: Attorney General William Barr was scheduled to testify before the House Judiciary Committee today. Following his testimony Wednesday before the Senate, however, he announced that he would not be appearing.

Barr has refused to take questions from lawyers on the Committee staff and is also refusing to comply with the sobpoena from the House Judiciary Committee to release the full Mueller report. 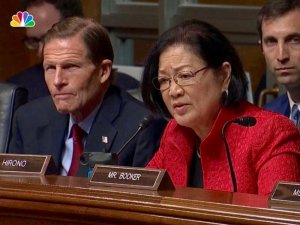 May 23, 2019: The requested deadline for Special Counsel Robert Mueller to testify before the House Judiciary Committee.

September 1, 2021 The US Senate currently stands at 50 Democrats, including two Independents who caucus with the Democrats, to 50 Republicans. As Vice President Kamala Harris serves as the...