The federal ban expired Saturday night, affecting millions of Americans who had the potential to be removed from their homes if they had fallen behind on rent. Like the previous order, the two-month moratorium comes from the Centers for Disease Control and Prevention, imposing a limited freeze through October 3rd. 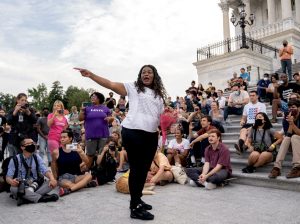 The order puts the administration, who previously said it didn't have the legal authority to issue such a measure, on course to face legal challenges that could reach the Supreme Court.

On Monday, White House COVID-19 Relief Director Gene Sperling told reporters that the President was limited by the June Supreme Court ruling that blocked the CDC from extending its past moratorium beyond the end of July.

Although the High Court denied a petition to lift the moratorium prior to the July 31st deadline, Justice Brett Kavanaugh wrote, "In my view, clear and specific congressional authorization (via new legislation) would be necessary for the CDC to extend the moratorium past July."

Nevertheless, on Tuesday, Biden directed the CDC to execute the order, asking state and local governments to extend or pass eviction moratoriums themselves, noting that there was $45 billion in pandemic relief meant to help leasers and landlords that was "sitting in the state treasuries right now."

Biden's decision follows weeks of contentious dispute between the White House and progressive Democrats angry that the President had left it to Congress to pass an eleventh-hour moratorium extension prior to recess. 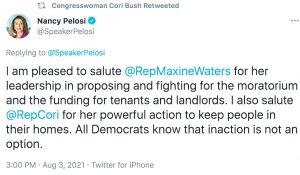 Congresswoman Cori Bush (D-MO), who two decades ago was homeless, sleeping in her car with her children, drew national attention by camping outside the Capitol for three nights in protest over the end of the eviction moratorium. Bush was joined by activists and fellow Democratic lawmakers, including Alexandria Ocasio-Cortez (NY), Ayanna Pressley (MA), Ilhan Omar (MN) and Jimmy Gomez (CA).

Some legal scholars say the new moratorium may survive legal scrutiny because it differs from the initial order which was nationwide and not targeted in the health-specific terms mandated by the CDC.

We will find out soon. On Wednesday, lawyers for a group of landlords and real estate companies asked a federal judge to stay the Biden's administration's new order, saying the CDC acted in "bad faith" to "relieve political pressure" on the White House "and used litigation delays to buy more time" to keep the "unlawful order in place."