The labor movement and, indeed, all who fight to champion democracy, lost a legend this morning with the unexpected passing of AFL-CIO President Richard Trumka. 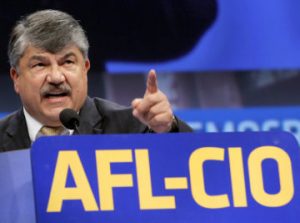 Trumka, 72, who reportedly died of a heart attack, had led the AFL-CIO, an umbrella group of 56 national and international labor unions representing 12.5 million members, for more than a decade.

A third-generation coal miner who rose to power and prominence through the United Mine Workers (UMWA), he was an outspoken advocate for social and economic justice.

A passionate voice for working people, Trumka grew up in the small coal-mining town of Nemacolin, Pennsylvania where he followed the family tradition of working in the mines while attending Penn State and Villanova University law school.

In 1982, at age 33, Trumka was elected the youngest president of UMWA, reforming the union and the industry. He famously led one of the most successful strikes in recent American history against the Pittston Coal Company, which tried to avoid paying into an industry-wide health and pension fund.

He was elected Secretary-Treasurer of the national AFL-CIO in 1995, where he created innovative programs that invested the collectively bargained pension and benefit funds of the labor movement to ensure they serve the long-term interests of workers.

Trumka was elected president of the AFL-CIO in 2009 after the retirement of John Sweeney. 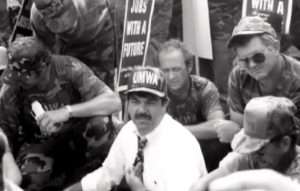 As the leader of the United State's largest labor federation, his economic advocacy extended from the kitchen table to worldwide influence. In 2010 he was elected President of the Trade Union Advisory Committee to the Organisation for Economic Co-operation and Development (OECD), which has 59 affiliated trade union centres in 31 countries, representing more than 66 million workers.

In 2011, Trumka was named one of Esquire Magazine's "Americans of the Year."

Trumka rallied international labor support for workers struggling for justice and fought to end unfair trade practices and restore US manufacturing strength. His life as a labor leader was driven by solidarity and a determination to improve life for all working families.

Comprehensive immigration reform was a central part of that goal, and in 2013 Trumka announced that organized labor would make an effort to work more closely with groups trying to aid immigrant workers, as the national debate on minimum wage and fair employment in the restaurant industry heated up.

In August of 2017, following then-President Trump's shocking comments regarding the Unite the Right rally in Charlottesville, Trumka quit the president's "manufacturing council" saying, "We cannot sit in a council for a President who tolerates bigotry and domestic terrorism." 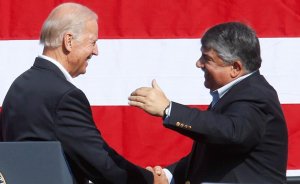 On February 4, 2018, Trumka was announced as the first recipient of the World Peace Prize for Labor Leadership for "his lifetime of dedicated service to the cause of Labor...as a fearless defender of the rights of working men and women."

He was a key ally of Democrats in Washington, having worked closely with every Democratic White House over the last 30 years.

President Biden was visibly shaken this morning after learning of the passing of "his very close friend," and Majority Leader Chuck Schumer (D-NY) choked up on the floor of the Senate today when paying tribute to Trumka.

DNC Chair Jaime Harrison spoke for many in a statement this afternoon. Of Trumka, he said, "May he rest in peace, and may each of us honor his legacy and carry forward the fight for fairness and progress for working Americans."

December 12, 2019 At 11:15pm ET tonight, after over fourteen hours of debate, the House Judiciary Committee unexpectedly recessed until Friday morning — without a vote on the articles of...