Afghanistan has been called "the Graveyard of Empires" (Wikipedia)

On April 14th, President Joseph Biden announced that all American troops would be withdrawn from Afghanistan by September 11, 2021. The drawdown will mark the 20th anniversary of the "9/11" terrorist that propelled the United States into our country's longest war.

Speaking to the nation last Wednesday, Biden said, "I am now the fourth United States president to preside over an American troop presence in Afghanistan. Two Republicans. Two Democrats. I will not pass this responsibility to a fifth...It's time for American troops to come home."

History
In 2001, a group called the Taliban, an ultraconservative political and religious faction, controlled the central-south Asian country and was providing sanctuary for a militant Sunni Islamist multi-national terrorist organization called al-Qaeda.

The United States has long been a major obstacle to achieving al-Qaeda's goals.

Their 1998 bombings of US embassies in Kenya and Tanzania and the 2000 attack on the USS Cole, brought worldwide recognition to al-Qaeda -- which is designated as a terrorist group by the United Nations Security Council, NATO and the European Union.

It was Al-Qaeda's September 11, 2001 attack on the United States, however, that led to full-scale war. On that day, a group of 19 al-Qaeda terrorists hijacked four airplanes, crashing them into New York's Twin Towers and the Pentagon in Washington, DC. A fourth plane crashed in a field in Shanksville, Pennsylvania. Nearly 3,000 people were killed in the worst terrorist attack in US history.

Phase One
International pressure on Afghan leaders to hand over al-Qaeda leader Osama Bin Laden, the architect of the attack, was rejected, prompting military action. 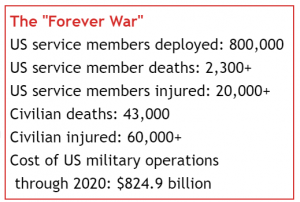 The US is assisted by a partnership of ethnic Pashtun anti-Taliban forces and the Northern Alliance, an anti-Taliban coalition of mujahideen militias that maintained control of a small section of northern Afghanistan.

In November 2001, the Alliance and allies took control of the Afghan capital Kabul, driving out the Taliban.

On December 5, 2001, at the United Nations conference in Germany, Afghan factions signed the Bonn agreement, installing Hamid Karzai as provisional head of government and creating an international peacekeeping force to maintain security in Kabul.

Phase Two
The period from 2002 through 2008 was marked by a US strategy of defeating the Taliban militarily and rebuilding core institutions of the Afghan state.

In March 2002, the US and Afghan troops launched Operation Anaconda, a major ground assault against 800 al-Qaeda and Taliban fighters in Paktia Province. al-Qaeda's leadership had escaped to Pakistan where they established a safe haven. 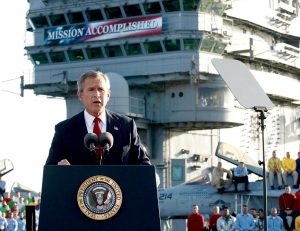 In 2003 George Bush famously declared "Mission Accomplished" and an end to fighting in Iraq, which was far from over (Stephen Jaffe/Agence France-Presse)

At the same time, the US began shifting military and intelligence resources away from Afghanistan to Saddam Hussein's Iraq as a part of President George W. Bush's "war on terror" following the 9/11 attack, despite no connection of the latter to Iraq.

In August 2003, the North Atlantic Treaty Organization (NATO) assumed control of international security forces (ISAF) in Afghanistan, expanding its role and representation from an initial 5,000 to 65,000 troops from 42 countries by the end of 2006.

In May 2005, Bush recommitted to ensuring "Afghanistan's long-term security, democracy, and prosperity."

In June 2006, the US dealt a blow to al-Qaeda's operations when its forces killed Abu Musab al-Zarqawi, a Jordanian-born militant who had formed an alliance with al-Qaeda in exchange for Osama bin Laden's endorsement of Zarqawi as the leader of al-Qaeda's franchise in Iraq. Zarqawi has been called the founder or father of ISIS.

Phase Three
The third phase, a turn to counterinsurgency, began in 2008 and accelerated with President Barack Obama's December, 2009 decision to temporarily increase the US troop presence in Afghanistan. "The Taliban is resurgent in Afghanistan," said Obama, "and al Qaeda supports the insurgency and threatens America from its safe haven along the Pakistani border."

On May 2, 2011, ten years after the war in Afghanistan began, US soldiers captured Osama bin Laden in Pakistan, where he was shot and killed, further weakening al-Qaeda's already fractious movement.

In June 2011, Obama announced the goal of decreasing US presence by thirty-three thousand troops by the summer of 2012 and begins peace talks with the Taliban four months later.

In June 2013, the Afghan military takes over primary responsibility for the conflict with the US-led coalition's focus shifting to military training and special operations-driven counterterrorism."

The US resumed peace talks with the Taliban, and in May of 2014, Obama announces a timetable for withdrawing most US forces from Afghanistan by the end of 2016.

In 2015, NATO launched Operation Freedom's Sentinel, focusing on counterterrorism and a shift from major military operations to a smaller role of training and assistance." 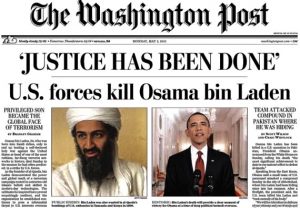 In April 2017, under the new administration of President Donald Trump, the US bombed self-proclaimed Islamic State militants in Eastern Afghanistan, killing 36 combatants and destroying a system of caves used by the terrorist organization. In August, Trump announced "an open-ended military commitment to prevent the emergence of 'a vacuum for terrorists.'"

In January 2018, the Taliban carry out a series of terror attacks in Kabul that killed more than 115 people amid a broader upsurge in violence.

On February 29, 2020, the US and the Taliban signed the Agreement for Bringing Peace to Afghanistan, which included withdrawal of all American and NATO troops from Afghanistan, a Taliban pledge to prevent al-Qaeda from operating in areas under Taliban control, and a plan for Taliban-Afghan government talks. 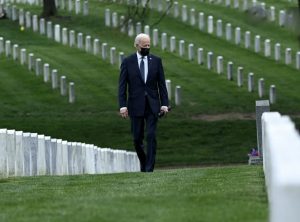 After announcement, Biden visited Section 60 of Arlington National Cemetery to pay respects to those who died in Afghanistan (USAToday)

After announcement, Biden visited Section 60 of Arlington National Cemetery to pay respects to those who died in Afghanistan (USAToday)

The United States also committed to closing five military bases, and an end economic sanctions on the Taliban. In September 2020, Afghanistan agreed to the release of the last 5,000 Taliban prisoners.

Phase Four
Under President Biden, the drawdown would begin rather than conclude by May 1st, the deadline set by the Trump administration.

Currently there are approximately 2,500 US troops in Afghanistan, and an additional 7,000 in foreign forces, the majority of them NATO troops who will also begin a final pullout by May 1st.

Biden's decision has been met with bipartisan concerns that, as long as the Taliban remains a potent force, an American withdrawal risks many of the gains made in democracy, women's rights and governance in Afghanistan.

Biden emphasized that the US will "not conduct a hasty rush to the exit," and will send an initial 30,000 additional US troops to Afghanistan to facilitate "a responsible transition of our forces out of Afghanistan," before final withdrawal. 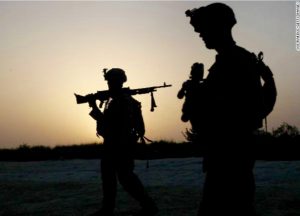 However, Biden said, "We cannot continue the cycle of extending or expanding our military presence in Afghanistan hoping to create the ideal conditions for our withdrawal, expecting a different result...It is time to end America's longest war."

April 11, 2018 Fourteen years ago Mark Zuckerberg started Facebook “out of his dorm room.”  Now 68% of U.S. adults are on Facebook. One of America’s most successful and...