In one very riled-up room in the Mayflower Hotel in Washington, DC last Friday, some 500 women leaders and supporters let loose about their critical role in the elections and the issues at stake.

Although actress Priyanka Chopra Jonas was a draw, it was the other headliners -- former Secretary of State Hillary Clinton, First Lady Jill Biden and Vice President Kamala Harris -- that brought the crowd to its feet.

The occasion was the annual conference of the Women's Leadership Forum (WLF), the Democrat Party's primary vehicle for amplifying women’s voices within the party. 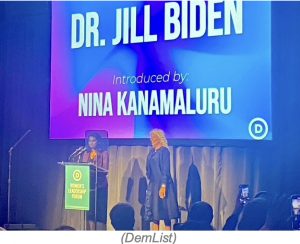 Background
The WLF was founded in 1993 by Hillary Clinton, Tipper Gore, and a number of trailblazers to ensure that women had "a seat at the table" at the DNC and were recognized as a key constituency of the Democratic Party.

The mission was to empower women to not only participate individually in politics, but to take ownership for their contributions to the Party, both personally and financially.

This year's conference was a tribute to how far it has progressed, including inspiring speakers, congressional and policy panels, briefings and presentations. 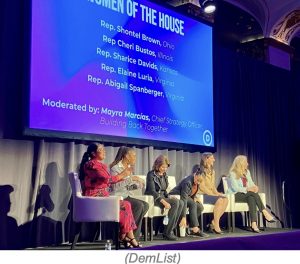 The threat to women's reproductive rights was prevalent throughout the day, including remarks by Planned Parenthood President Alexia McGill Johnson, a panel on "Abortion on the Ballot," and a polling and messaging briefing by renowned pollster Celinda Lake. 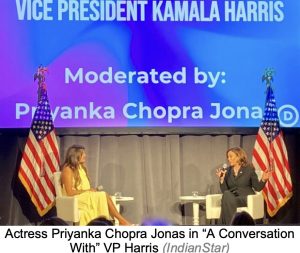 In the closing conversation with Jonas and Harris, the Vice President reminded those present of the consequences to their personal freedoms and civil rights if we lose control of the Democratic majority in the Senate and House in the upcoming midterms -- now just five weeks away.

"If there were ever any reason for this group to exist in recent memory, the moment is now," Harris said.

"We have got to do everything we can in the next 39 days to remind people what is at stake in these elections." 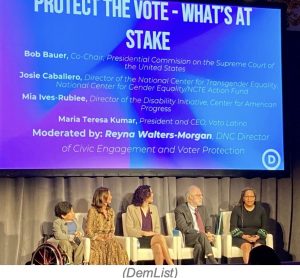 Related
DemDaily: Download on the DNC Summer Meeting 9/13/22
DemDaily: Your Guide to the Democratic National Committee 9/8/22
SignUp for the DemDaily column on issues, politics and the players.

August 2, 2018 In honor of former President Barack Obama’s upcoming birthday, a snapshot of his record, and a reminder of the days under the most popular President of our time. Although...

August 24, 2018 The gathering of Democratic National Committee (DNC) members at their bi-annual meeting is usually a matter of procedural and party business, reconnecting and planning with state...