The US House has elected its leaders for the 117th Congress, which will convene on January 3, 2021. 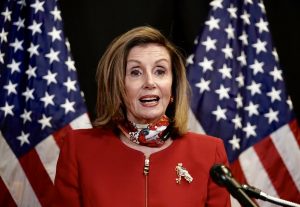 The leadership elections, which were held November 18th, saw most of the current party leaders return unopposed, including House Speaker Nancy Pelosi (CA).

The Speaker of the House, is elected on the first day the new Congress convenes. Other leadership positions are elected in meetings of the conference prior to the start of a new Congress.

It marks Pelosi's fourth term with the gavel. The California Congresswoman made history as the first woman elected Speaker of the House in 2007. Democrats lost the majority in 2011, but she regained the gavel in 2019 when Democrats retook the majority following the 2018 midterms.

The GOP made support for, or opposition to, re-electing Pelosi to the speakership an issue in the 2018 elections, attempting to tie moderate Democrats to the "left-wing" policies of the San Francisco "liberal."

After Democrats flipped forty seats to take control of the House, Pelosi, 80, committed to not seeking the speakership beyond 2022 in deference to younger Democrats' call for generational change.

Although the caucus vote was conducted virtually, Pelosi was approved by a voice vote. She will formally be elected as speaker January 3rd when the full house is sworn in, when she will need to secure a simple majority of 218 Democratic votes to make it official. 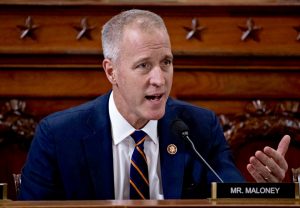 Maloney touted his ability to win in a Trump-won district despite being "a married gay man with an interracial family." (Andrew Harrer/AP)

In the contest for Chair of the Democratic Congressional Campaign Committee, the election arm for House Democrats, Sean Patrick Maloney (NY) triumphed over Tony Cárdenas (CA), 119 to 107.

Incoming Democratic Caucus Vice Chair Pete Aguilar (CA) will be the highest-ranking Latino on the emerging leadership team. He beat out Illinois Congresswoman Robin Kelly for the number six slot in leadership, 148-82.

In the three-way race for caucus leadership representative, a position reserved for members who have served five terms or less, Texas Congressman Colin Allred prevailed with 46 votes over Jason Crow (CO) with 43 and Brenda Lawrence (MI) with 42. 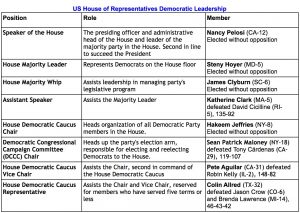 December 20, 2019 Less than 24 hours after the impeachment of President Donald J. Trump, the top democratic candidates running to replace him graced the stage at Loyola Marymount University in Los...