In the tradition of Washington "powerhouse" luncheons, 225 of the country's most prominent Latino leaders gathered in DC last week to honor their shining stars and to issue a challenge to current and next generations.

Elected officials, corporate and community dignitaries were on hand at the Mayflower Hotel for the 58th Latino Leaders Luncheon series event hosted by the Latino Leaders Network last Thursday. 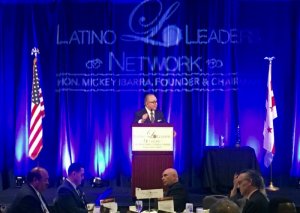 They were just a few of the organizations present that advocate on behalf the 58.9 million Hispanics and Latinos living in the United States. 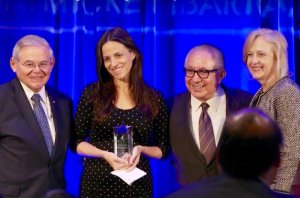 Menendez, 35, is also contributing editor at Bustlehost of the Latina to Latina podcast and previously hosted Come Here and Say That on Fusion and was a host and producer of HuffPost Live. She has a book, The Likeability Trap: How to Break Free and Own Your Worth, coming out in November.

Kerger praised Menendez as "one of the most influential voices of her generation ... who embodies the best attributes of public media: integrity, relentless curosity and a desire to make a difference."

In the closing remarks of her acceptance speech, Alicia Menendez set the tone for the rest of the event with her challenge to those in the room. 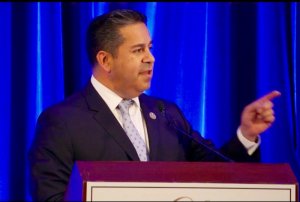 Lujan: "What can we do to make a difference with our advocacy, with our lives, with our policy, with our voices?"(Click/Watch)

Senator Bob Menendez (D-NJ), who is Ranking Member on the Senate Foreign Affairs Committee, was on hand to recognize his daughter's achievement and to introduce Congressman Ben Ray Lujan (D-NM), the keynote speaker and recipient of the Latino Leaders Network's Eagle Leadership Award.

Lujan chaired the Democratic Congressional Campaign Committee (DCCC) during the successful 2018 midterm elections that delivered control of the US House to Democrats and is running for the 2020 US Senate being vacated by the retirement of New Mexico's senior Senate, Tom Udall (D).

Lujan, who is known for his work on the Affordable Care Act and leadership in protecting America's public lands, wasted no time in appealing to those present.

Lujan challenged, "We have a room of leaders from across America. Democrats, Republicans, Independents and Libertarians. All represented in this room. There is not a one of us who agrees with what this President is doing. 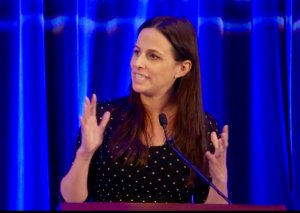 Let's come together. Let's stand up to these attrocities of tearing children apart from their families and putting them in cages ... I hope those images move you to speak up. To say something if you have been a part of the conversation and say 'No more, not on our watch!' Are you with me?"

Also recognized at the event was LLN's Community Partner, Friends of National Museum of the American Latino, represented by Estuardo Rodriguez Jr. The non-profit is dedicated to the creation of a museum on the National Mall.

Other speakers included remarks from sponsors Bill Bradley of Anheuser-Busch, Fred Humphries of Microsoft and recognition of other sponsors Southwest Airlines and Geico.

More Hispanics voted in 2018 than in any other time in history. Their voice, and their vote, will be a critical factor in taking back the White House. 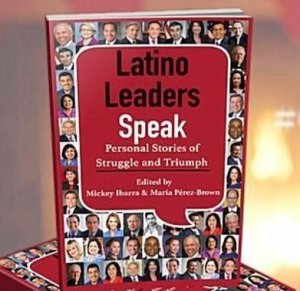 LLN Chair Mickey Ibarra announced that Latino Leaders Speak: Personal Stories of Struggle and Triumph, a collection of 33 keynote addresses by some of our country's most prominent Latino voices, will be released as a curriculum guide for teachers in August.

Order It Here!
Get the Guide in your classroom: jayna@latinoleadersnetwork.org
#LatinoLeadersNetwork

DemList is dedicated to educating and informing the public daily on politics and the players
SignUp for the DemDailys
Forward and Follow on Facebook, Twitter and LinkedIn