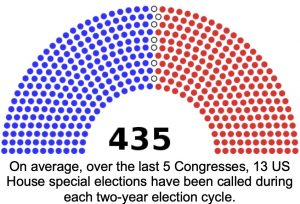 Now less than six weeks before the 2022 midterms, there are still technically three special elections remaining to fill the terms of members of the 117th Congress who vacated their seats early.

Those include one in the US House and two in the US Senate.

A special election is one called by respective state governors to fill vacancies that occur when a Member of Congress passes away, retires or resigns before the completion of his or her full term.

US HOUSE
A total of 14 US House special elections have taken place during the 117th Congress to date, with just two briefly changing the partisan makeup of the US House. 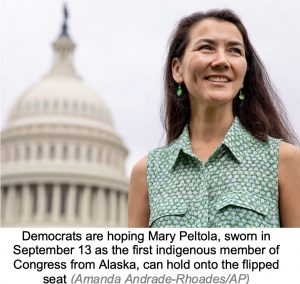 Peltola is now running in November for a full term to the 118th Congress. In the open, ranked-choice general election, Peltola again faces Palin and Nick Begich III (R), who came in third in both the special and the regularly scheduled congressional primary.

There are two remaining vacancies in the US House. 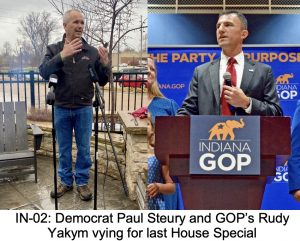 In Florida's 13th Congressional District, vacated August 31, 2022 by three-term incumbent Charlie Crist (D) to focus on his 2022 Florida gubernatorial election, the seat will remain vacant until the November election. The redrawn Pinellas County-based 13th CD moved from a split seat to a Republican-favored R+6 district.

In Indiana's Second Congressional District, represented by five-term GOP Congresswoman Jackie Walorski until her death in a car accident August 3, 2022, a special election will be held November 8.

The GOP nominee for both is Rudy Yakym, a supply chain management executive and former finance director for Walorski. The Democrat nominee for both elections is environmental consultant Paul Steury. 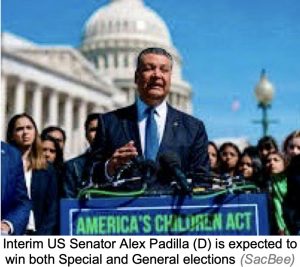 US SENATE
US Senate specials are much rarer and most commonly due to health issues or the passing of senior members.

Oklahoma
Oklahoma Senator Jim Inhofe, 87, is retiring two years into his fifth term, with a special general election scheduled for November 8, 2022. In this case, the winner will hold the seat until January 2027, the end of Inhofe's current term.

California
In solidly blue California, voters cast their ballots in the June 7, 2022 primary in two elections for the same US Senate seat.

The first was in the special primary election to fill the remaining term of former Senator Kamala Harris, who resigned the seat in January of 2021 to become Vice President. Former California Secretary of State Alex Padilla (D), who was appointed by Governor Gavin Newsom (D) as interim US Senator on December 22, 2020, has since been representing the Golden State.

In California's "jungle primary" system where all candidates, regardless of party affiliation, run against each other, Padilla (58%) and Republican constitutional attorney Mark Meuser (18.8%) advanced to the general election as the top two vote-getters. The winner of the special general election on November 8 will serve through the remaining two and half months of the 117th Congress.

The two also advanced from the regular Senate primary to the November 8 general election for a new, full six-year term, beginning with the 118th United States Congress on January 3, 2023.