DemDaily: The Last of the 117th Congress

DemDaily: The Last of the 117th Congress

As we enter the months of the 2022 midterms, there are still six special elections remaining to fill the terms of members of the 117th Congress who vacated their seats early.

The winners of each of these contests will serve through January 3, 2023, but will still have to run separately in the newly redistricted congressional districts on November 8, 2022 for a full term in the next Congress.

US HOUSE
The partisan breakdown of the current 117th Congress of the US House of Representatives stands at 221 Democrats to 214 Republicans, including one Democratic and three Republican vacancies.

Ten special elections have taken place in the 2021-2022 term, with only one changing the partisan makeup of the US House. That was the most recent in Texas' 34th Congressional District to fill the remaining term of longtime Democratic Congressman Filemon Vela, who resigned March 31, 2022.

In an unexpected turn, the GOP flipped the seat in the June 14 primary, with the victory of Republican Mayra Flores, who secured 51% to Democrat Dan Sanchez's 43.3%. The win is likely a short one, however, as the newly redistricted 34th CD pits Flores against Congressman Vincente Gonzalez (D) in November.

The district was previously held by DFL/Democrat Tim Waltz for five terms until Hagedorn narrowly flipped the seat in 2018 after Walz left to successfully run for governor. The current and redistricted seat favor the GOP (R+7).

August 16: A total of 48 candidates, led by former Governor and 2008 Vice Presidential candidate Sarah Palin (R), ran in the June 11 special election primary for Alaska's At-Large Congressional District. The seat was vacated in March after the passing of longtime Congressman Don Young (R). 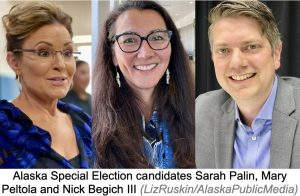 In Alaska's new all-party open primary system, the top four candidates advance to the general election. Those include Palin, who secured 27% in the special primary, Republican software company entrepreneur Nick Begich (19%), and Democrat and former State Representative Mary Peltola (10%). Surgeon and 2020 US Senate candidate Al Gross (Ind), who secured 13%, dropped out of the race June 20.

Despite Palin's primary lead, she has fallen behind in polling. A July 2-5, 2022 Alaska Survey Research RCV poll of likely voters showed Peltola leading the first round preference with 40% to Begich with 31%, and Palin with 29%. After the redistribution of votes in the second round, however, Begich had 57% to Peltola's 43% (MOE: +/- 2.9%). 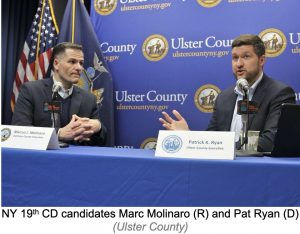 Regardless of the August 16 special election outcome, Palin, Begich and Peltola, along with 19 other candidates, have filed to run in the regularly scheduled primary election, held the same day, for the 118th Congress term.

August 23: In New York's 19th CD, Pat Ryan (D) and Marc Molinaro (R) are running in the special election to fill the remaining term of two-term Congressman Antonio Delgado, who vacated the seat in May to become Lieutenant Governor.

The battleground seat is being closely watched for its reflection of national messaging by the parties. Ryan, a tech entrepreneur, former Army intelligence officer and 2018 Congressional candidate who serves as Ulster County Executive, is focused on preserving abortion rights in the wake of the Supreme Court's decision. Molinaro, a former Mayor of Tivoli, former State Assemblyman, the 2018 Republican gubernatorial nominee and current Dutchess County Executive, is running on the economy and inflation.

In the contest for the regularly scheduled general election for the 218th Congress, however, the two are running in different districts, with Ryan running in the redrawn 18th district and Molinaro in the new 19th district. Both seats, which take in parts of the current 19th CD, are competitive.

However, should Sempolinski, a former Reed staffer, prevail in the heavily Republican seat, he will only serve for four months as he is not running for the regular general election in November. Six GOP contenders have filed for that race, as well as Della Pia on the Democratic side. 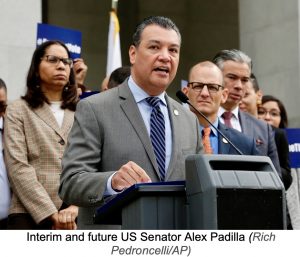 The two are vying to fill the remaining four years of incumbent Republican Senator Jim Inhofe's fifth term. Former Congresswoman Kendra Horn is the Democratic nominee. The winner of the special general election on November 8 will hold the seat until January 2027.

California
November 8: On June 7, 2022, voters in beautifully blue California cast their ballots in two elections for the same US Senate seat.

The first was in the special primary election to fill the remaining term of former Senator Kamala Harris, who vacated the seat to become Vice President. Former California Secretary of State Alex Padilla (D), who was appointed by Governor Gavin Newsom (D) as interim US Senator on December 22, 2020, has been representing the Golden State in the seat. 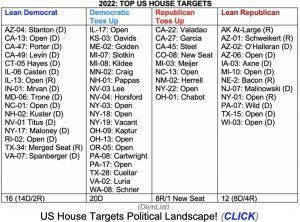 In California's "jungle primary" system where all candidates, regardless of party affiliation, run against each other, Padilla (58%) and Republican constitutional attorney Mark Meuser (18.8%) advanced to the general election as the top two vote-getters. The winner of the special general election on November 8 will serve through the remainder of the 117th Congress, which ends January 3, 2023.

The two also advanced from the regular Senate primary, also held June 7th, to the November 8 general election for a new, full six-year term, beginning with the 118th United States Congress on January 3, 2023.

September 30, 2022 Now less than six weeks before the 2022 midterms, there are still technically three special elections remaining to fill the terms of members of the 117th Congress who vacated...

July 8, 2020 Two of the last five presidential primary elections were held yesterday — in Delaware, and in New Jersey, which also held its regularly-scheduled state primaries for statewide...