DemDaily: The Last 24 Hours of History

DemDaily: The Last 24 Hours of History 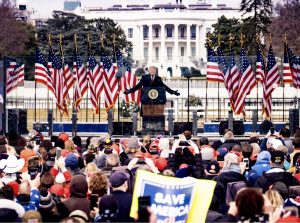 Yesterday morning, as members of the 117th Congress prepared to meet in a joint session of Congress to certify the results of the Electoral College vote electing Joe Biden as our 46th President, the current President of the United States was speaking at a "Stop the Steal" rally.

In a 70-minute diatribe, President Trump said, "We will never give up. We will never concede. It will never happen. You don't concede when there's theft involved. Our country has had enough. We will not take it anymore."

He closed by encouraging the dangerous mob, which included white supremacists, neo-Nazis and members of QAnon and Proud Boys, to 'go down to the Capitol' and 'give our Republicans the kind of pride and boldness that they need to take back our country."

The Timeline
8:17am: In anticipation of the Electoral College vote, President Donald Trump tweets that states "want to correct their votes" and that Vice President Mike Pence should "send them back to the states." 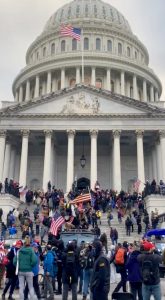 Protestors on the East Side of the Capitol at 4:30pm (KimberlyScott/DemList)

12:15pm: Addressing a rally of thousands promoted on right-wing social media, Trump delivers an incendiary speech recycling many false claims about electoral fraud and urged supporters to march on the US Capitol.

12:53pm: Vice President Mike Pence releases a statement, defying the president by saying that he does not have the authority to reject the electoral votes.

1:50pm: Senate Majority Leader Mitch McConnell (R), having previously acknowledged the election results, tells his colleagues that Congress should not attempt to override the voters' verdict in electing Democrat Joe Biden president, warning, "If we overrule them we will damage our republic forever."

1:55pm: Capitol Hill Police evacuate the Cannon House Office Building and the Library of Congress due to "police activity" as thousands of Pro-Trump forces gather outside the Capitol to protest the electoral vote.

2:05pm: Vice President Mike Pence is whisked away to a secure bunker in the middle of active proceedings in the Senate.

2:20pm: Both chambers of Congress abruptly recess and the Capitol goes on lockdown. Reporters are told to stay in the Senate's press gallery behind locked doors.

Clad in MAGA apparel and carrying Confederate flags, the protestors tear down metal barricades at the bottom of the Capitol's steps and are met by officers in riot gear. Officers fire pepper spray into the crowd to keep the advancing crowd back. 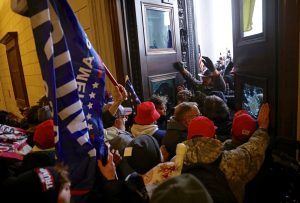 2:39pm: Trump tweets, "Please support our Capitol Police and Law Enforcement. They are truly on the side of our Country. Stay peaceful!" He does not, however, call for his supporters to disperse.

2:45pm: Members are given gas masks after tear gas was released in the Capitol Rotunda and police begin to evacuate some lawmakers from the Capitol.

2:50pm: Law enforcement confirms that a shot was fired inside the building, later reporting that a woman was hit and later died. Three other protestors died of "medical" issues.

3:20pm: The Senate chamber is secured and officers successfully push rioters down from the second and third floor of the rotunda.

3:35pm: Vice President Mike Pence tweets, "The violence and destruction taking place at the US Capitol Must Stop and it Must Stop Now." 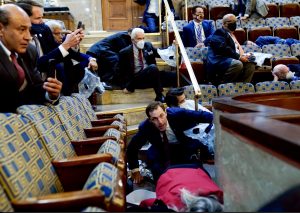 The Department of Homeland Security dispatches federal agents to the US Capitol to help quell violence.

3:45pm: Capitol police encourage members of Congress and staff in the building to stay in place and shelter.

4:10pm: President-elect Joseph Biden addresses the nation, calling the actions of Trump supporters "an insurrection," and "an assault on the most sacred of American undertakings: the doing of the people's business." Biden also demands that President Trump immediately make a televised address calling on his supporters to cease the "unprecedented assault" and violence.

4:40pm: Trump posts a video to his supporters, reiterating again the false attacks about the presidential election, then saying, "I know your pain. I know your hurt. But you have to go home now... We love you. You're very special." 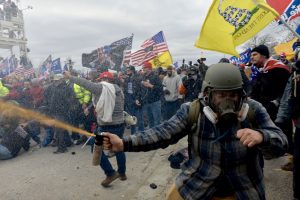 5:00pm: Washington, DC Police Chief Robert Contee says protesters deployed "chemical irritants" on police to gain access to the Capitol. The scene has been declared a riot, and law enforcement officials from Maryland, Virginia and New Jersey are deployed to the Capitol, in addition to the National Guard, Homeland Security investigators and the Secret Service.

5:05pm: Pro-Trump demonstrators amass outside statehouses across the country. In St. Paul, Minnesota, cheers rang out from demonstrators when they learned the Capitol had been stormed. In Georgia and Oklahoma, some demonstrators carried guns. Protests forced evacuations in New Mexico and Utah, and in Columbus, Ohio a scuffle broke out between pro-Trump demonstrators, including members of the Proud Boys, and counterprotesters.

5:40pm: Police use tear gas and percussion grenades to begin clearing out the rioters from the Capitol grounds ahead of DC's curfew. At 5:50pm officials declare the US Capitol complex "secure." 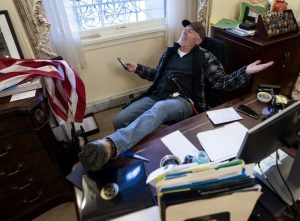 After making his way to the desk of US House Speaker Nancy Pelosi, one protester left a message reading "we will not back down" (EPA)

5:45pm: Facebook VP of integrity says Trump's video message has been removed from its platform because "we believe it contributes to rather than diminishes the risk of ongoing violence."

6:00pm: DC's curfew goes into effect. Dozens of pro-Trump protestors remain on the streets in defiance of the curfew.

6:25pm: Trump rationalizes the violent occupation of the Capitol, tweeting, "These are the things and events that happen when a sacred landslide election victory is so unceremoniously & viciously stripped away from great patriots who have been badly & unfairly treated for so long."

The President's erratic tweets and behavior are described by sources in the White House as "unhinged."

Elected officials of both parties, civil rights, community and corporate leaders condemn Trump's actions, with many calling for his immediate removal of office under the 25th Amendment. 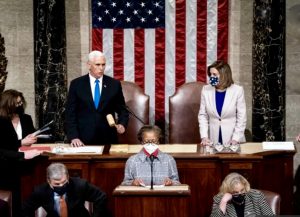 Despite the shocking events of the previous six hours, some members of the GOP continue to forge forward with their objections.

Today: Presidential-elect Joe Biden addresses the country, condemning the storming of the Capitol
as a violent expression of President Trump's refusal to accept defeat, calling it "an assault on the citadel of liberty."

Saying Trump was responsible for instigating the violence and chaos that spread throughout the Halls of Congress -- "a dark moment" in the nation's history.

"At their best, the words of a president can inspire. At their worst, they can incite," says Biden, "It's disorder. It's chaos. It borders on sedition and it must end now."

March 4, 2020 In a stunning turn of events yesterday, Joe Biden won ten states to Bernie Sanders three in the Super Tuesday primaries, historically reshaping the 2020 race for the White House...