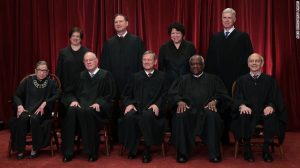 The Supreme Court of the United States' (SCOTUS) anounced a series of landmark, if not devastating, decisions this week -- not the least of which was the announcement that Justice Anthony Kennedy is retiring from the bench.

Kennedy is one of five conservatives on the court, but has served as the crucial swing vote in siding with the four liberal justices on key cases like legalization of gay marriage.

The announcement of his retirement dealt a second blow following yesterday's ruling on the Janus case, one of dire consequences for public employee unions.

In Janus v. American Federation of State, County, and Municipal Employees (AFSCME), Council 31, the high court, by a 5-4 decision, ruled that requiring a public-sector employee to join or pay "agency" fees to a union for the cost of collective bargaining, violates that employee's First Amendment right to free speech. 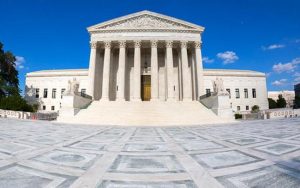 SCOTUS meets from October to April to hear oral arguments, and announced decisions before the end of each term in June (pic: the 74)

Background
For the last forty years, as dictated by the Supreme Court's 1977 Abood v. Detroit Board of Education decision, it has been legal for state and local governments to require public-sector workers to pay union fees as a condition of government employment, even if those workers are not union members.

In Abood, the Court ruled that mandatory fees were permissible as "fair share" payments for cost of the union's collective bargaining efforts - that benefit all public employees, including non-union members.

The Case
Illinois state employee Mark Janus filed suit in 2015, objecting to the mandatory fees, arguing that, by contributing to the union, the state was forcing him to support political speech and activism that he does not wish to support. 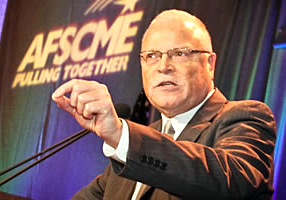 The Justices' decision will trigger "a backlash that further emboldens union members to stick together - in a way sure to make a difference in November's elections."  -- AFSCME President Lee Saunders

Although the fees in question could not be used for politics and lobbying, Janus contended it was still financial support for an inherently political organization, made worse by the fact that the employer is the federal government.

SCOTUS tackled a similar challenge to Abood last term in the case of Friedrichs v. California Teachers Association in 2016 but, after the death of Justice Antonin Scalia, the 8-member court ended in a tied 4-4 decision, therefore leaving Abood in place.

With no decision from Friedrichs, a new complaint was filed by Janus and other plaintiffs, but the District Court, then the US Court of Appeals for the 7th Circuit rejected Janus' challenge to Abood, deferring to the US Supreme Court's jursidiction, which granted certiorari (agreed to hear the case) last September.

The Dissenters
The decision is expected to have a crippling effect on the financial stability of labor unions, not only stripping them of "agency fees" that fund their collective bargaining efforts on behalf of all union and non-union members, but requiring, for the first time, that union membership for new public employees be "opt-in" rather than opt-out.

With the anticipated appointment of a conservative justice to replace Kennedy, one Republicans are determined to make before the November elections, the fate of legal precedences that protect other rights, like abortion, are in very real danger.

One vote - at the ballot box or on the High Court - makes a difference.