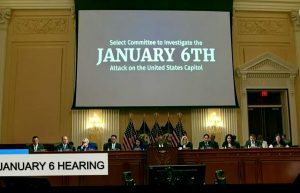 The House Select Committee to Investigate the January 6th Attack held its seventh hearing this week.

Each of the series of televised hearings has focused on different components of Trump's "sophisticated seven-part plan to overturn the presidential election and prevent the transfer of presidential power." The unfolded and dramatic narrative has been meticulously presented by the committee over the past six weeks.

As stated in Chairman Bennie Thompson's (D-MS) opening remarks, Tuesday's hearing was about "how as a part of his latch ditch effort to overturn the election and block the transfer of power, Donald Trump summoned a mob to Washington, DC and ultimately spurred that mob to wage a violent attack on our democracy."

The evidence, as stated by Committee Vice Chair Liz Cheney (R-WY), showed that "that Trump's legal team, led by Rudy Giuliani, knew that they lacked actual evidence of widespread fraud sufficient to prove that the election was actually stolen." As did Donald Trump, said Cheney, "but they went ahead with January 6th anyway." 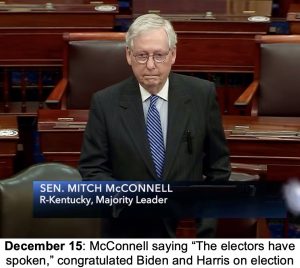 The hearing focused on events between December 14, 2020, when the electoral college met to certify the election, and January 6, the day of the insurrection.

By December 14, as shown in video depositions, Trump had been repeatedly told by his White House attorneys and advisors, his campaign, and his Attorney General and Department of Justice -- which had investigated all the claims -- that there was no evidence of fraud and that he had lost the election.

The courts, including multiple judges appointed by Trump, had also rejected what would eventually total 61 post-election lawsuits, including in six swing states that were too close to call the night of the election.

His party leadership, too, had acknowledged defeat, with Senator Minority Leader Mitch McConnell saying on the Senate floor December 15, "the electors have spoken." 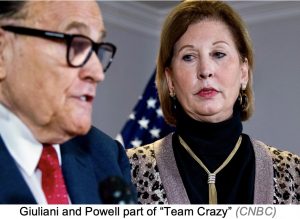 A key focus of the hearing was a December 18 meeting at the White House, described by Hutchinson as "unhinged," which involved a six-hour showdown between White House Counsel members and what some called the "crazies." Those included Giuliani, attorney Sidney Powell, former NSA Advisor General Michael Flynn and, on that day, former Overstock CEO Patrick Byrne.

White House Senior Counsel Pat Cipollone, who provided eight hours of "valuable" closed-door testimony before the committee last Friday, said he rushed to the Oval Office upon hearing of the unplanned meeting underway between Giuliani and his team and the President.

With White House attorneys Eric Hershmann and Derek Lyons, Cipollone again tore into the legitimacy of each of "Team Crazy's" proposals to overturn the election, while Trump stood by observing what had escalated to insults and threats between the participants.

One scheme, which had already been unequivocally rejected as "nonsense" by Attorney General Bill Barr, involved a draft executive order for Trump to direct the Secretary of Defense to execute a mass seizure of state election machines. Under the order, Trump would also appoint a special counsel, who was to be Sidney Powell, with extensive powers to charge people with crimes.

Powell told Trump that these steps were justified because of alleged foreign interference in the 2020 election -- theories she had previously publically espoused involving Venezuela, China and Iran, and conspiracies involving Dominion voting machines. 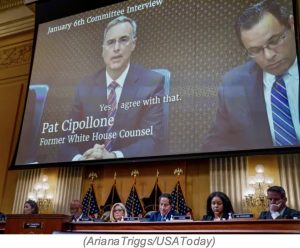 Cipollone "was vehemently opposed" to the idea, saying, "That's not how we do things in the United States." He questioned Powell's qualifications to be "appointed to anything."

Giuliani and Flynn continued to deflect demands from the White House team for evidence in what had evolved into a screaming match that almost came to physical blows.

That siren call, said Congresswoman Stephanie Murphy (D-FL), who was leading the hearing along with Congressman Jaime Raskin (D-MD), "served as a call to action and in some cases as a call-to-arms for many of President Trump's most loyal supporters."

The tweet, said Raskin, "electrified and galvanized his supporters, especially the dangerous extremists in the Oath Keepers, the Proud Boys, and other racist and white nationalist groups spoiling for a fight against the government."

On December 19th at 10:22am, just hours after Trump's tweet, Kelly Meggs, the head of the Florida Oath Keepers, declared an alliance among the Oath Keepers, the Proud Boys and the Florida Three Percenters, another militia group, "to get this shit done."

Far-right commentator Ali Alexander registered "wildprotest.com" the same day, named after Trump's tweet. Women for America First, a pro-Trump organizing group that had previously applied for a rally permit for January 22nd and 23rd after the inauguration, moved their permit to January 6th.

The committee showed a string of social media videos of right-wing personalities promoting the protest, and referred to hundreds of posts that showed "strategic and tactical planning," including maps of Washington, DC that pinpoint the location of police, suggestions for targeting members of Congress and a call to armed weapons. Others referred to a "red wedding" which means a bloody massacre.

Jody Williams, founder of the openly racist and anti-Semitic forum TheDonald.Win, testified in depositions that the president's tweet created a laser-like focus on the date of January 6th, which exploded online. 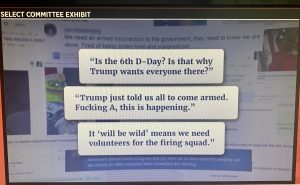 The committee played voice testimony of a former Twitter employee who had been tracking Trump's posts and related activity for months, appealing to no avail to his superiors to shut down the mounting threats. After Trump's December 19 tweet, his concerns amplified. "The former president...was speaking directly to extremist organizations and giving them directives...The leader of their cause was asking them to join him in this cause and in fighting for this cause in DC on January 6th as well." The explosion of pro-violence responses to Trump's tweets "shocked me," said the witness.

"While Trump supporters grew more aggressive online," said Raskin, "he continued to rile up his base on Twitter, saying there was overwhelming evidence that the election was the biggest scam in our nation's history." Trump continued to boost the event, tweeting more than a dozen times in the lead-up to January 6. 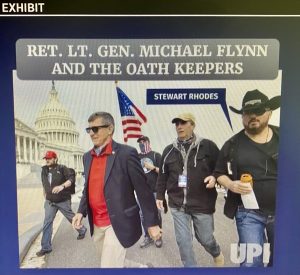 In the weeks leading up to the attack, the extremist groups worked with Trump allies Flynn and former Trump campaign advisor Roger Stone on a series of Stop the Steal rallies. The committee obtained encrypted content from a group chat called Friends of Stone (FOS) which included Stone, Oath Keepers leader Stewart Rhodes, Proud Boys leader Enrique Tarrio and Ali Alexander, all of whom, according to Oath Keepers lawyer Kelly Sorrell, became "the center point for everything."

"Another part of the President's strategy," stated Murphy, "involves certain members of Congress who amplified his unsupported assertions that the election had been stolen." 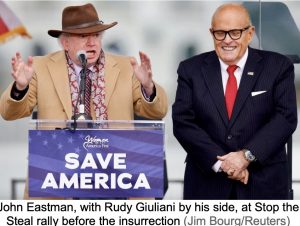 Despite counsel's advice, Trump, Giuliani and his team persisted in their pressure campaign on the Vice President. On January 4, Eastman met with Trump and Pence at the White House. Pence would reject their proposal again in a now famous call the morning of January 6 in which Trump called Pence a "whimp," among other expletives.

On the morning of January 5, Trump spoke twice with his former campaign advisor Steve Bannon. After the first call Bannon, speaking on a conservative radio show, said "All hell is going to break loose tomorrow... It's all converging and now we're on the point of attack, the point of attack tomorrow... strap in."

In the interim, the extremist groups were escalating their efforts, prompting Stop the Steal rallies organizer Katrina Pierson to contact Meadows over concerns about violence and some of the scheduled speakers at a January 5th rally the night before the insurrection. Those included Alexander and Alex Jones, the founder of the conspiracy theory website Infowars, whose "suspect rhetoric" had incited trouble at other rallies. Meadows was undeterred. 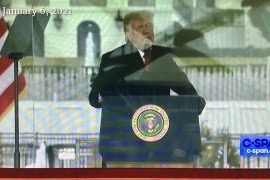 As Stone, Flynn, Alexander, Jones and others spoke at the Freedom Plaza rally that night, a giddy, "fired up" Trump listened from the Oval Office and talked excitedly about the rally the next day. According to White House aides Nicolas Luna, Sara Matthews and Deere, Trump at one point turned to them asking, "How do we make the RINOs do the right thing?

At the Stop the Steal rally the next morning, Trump, now having been told by Pence that he would not overturn the electors, turned his unscripted anger on the Vice President. "So I hope Mike has the courage to do what he has to do. And I hope he doesn't listen to the rhinos and the stupid people that he's listening to. We fight like hell. And if you don't fight like hell, you're not going to have a country anymore." Marching to the Capitol was referenced four times in the speech.

The committee heard live witness testimony from Stephen Ayres, a former Trump supporter and one of the rioters who answered the President's call to Washington and marched to the Capitol on the President's orders. He pleaded guilty last month to disorderly and disruptive conduct at the Capitol. 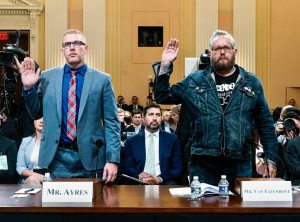 Ayres, who described himself as "a family man and a working man," followed the conspiracy theorists and Trump on social media and believed Trump that the election was stolen. While originally not intending to march to the Capitol, he said, "the President got everybody riled up and told everybody to head on down. So we basically was just following what he said."

The other live witness Tuesday was Jason Van Tatenhove, who served as the Oath Keepers' national media director from 2014-2017. While he was not part of the Oath Keepers on January 6, he spoke to the group's propaganda efforts and violent radicalization under founder Stewart Rhodes, who capitalized on conspiracy theories and had drifted further into the alt right world into white nationalists and even straight up racists.

Van Tatenhove said Rhodes, who has been charged with seditious conspiracy in relation to the Capitol attack, had "grand visions of being a paramilitary leader." In the weeks leading up to January 6, Rhodes publicly implored Trump to invoke the Insurrection Act, the 1807 law that allows the President to call up militias to put down a rebellion against the United States.

Tatenhove said "I do fear for this next election cycle, because who knows what that might bring? If -- if a president that's willing to try to instill and encourage to whip up a civil war amongst his followers using lies and deceit and snake oil, and regardless of the human impact, what else is he going to do if he gets elected again?"

February 3, 2022  16-term Tennessee Congressman Jim Cooper (D) became the latest member of Congress to announce his retirement, bringing the number of House departures to 43 going into the 2022...