Last night, the House Select Committee to Investigate the January 6th Attack held its much-anticipated first public hearing, the culmination of the committee's year-long investigation into the violent January 6, 2021 attack on the US Capitol. It surpassed expectations.

Over two hours of dramatic, erudite and powerful statements, testimony and never-before-seen video, the committee presented its findings to the American people.

In a direct and concise narrative, Committee Chairman Congressman Bennie Thompson (D-MI) laid out an elaborate scheme, led and coordinated by former President Donald Trump.  "A sprawling, multi-step conspiracy, aimed at overturning the results of the 2020 Presidential election…aimed at throwing out the votes of millions of Americans -- your votes -- your voice in our democracy -- and replacing the will of the American people with his will to remain in power after his term ended." 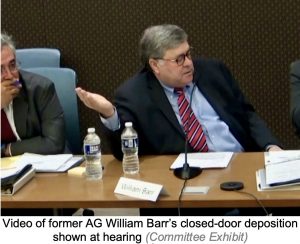 Thompson's opening statement provided a roadmap to the proceedings, beginning with Trump's allegations of election fraud and his attempts to get his Justice Department to declare the election corrupt.

Video testimony showed former US Attorney General Bill Barr, who resigned after the 2020 elections, saying, “I made it clear I did not agree with the idea of saying the election was stolen and putting out this stuff, which I told the president was bull***t."

Thompson went on to Trump's unsuccessful legal challenges. "He lost in the courts, just as he did at the ballot box. And in this country, that's the end of the line."

Ultimately, said Thompson, "Donald Trump was at the center of that conspiracy...the President of the United States spurred a mob of domestic enemies of the Constitution to march down the Capitol and subvert American democracy." 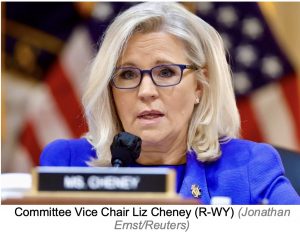 Committee Vice Chair Congresswoman Liz Cheney (R-WY) continued with a preview of the evidence to come, of Trump's actions during the insurrection, and how for hours he angrily refused the pleadings of staff, his family, and advisors "who begged him...to instruct his supporters to stand down and evacuate the Capitol."

"Tonight," said Cheney, "and in the weeks to come, you will see evidence of what motivated this violence, including directly from those who participated in this attack...On this point, there is no room for debate. Those who invaded our Capitol and battled law enforcement for hours were motivated by what President Trump had told them: that the election was stolen, and that he was the rightful President. President Trump summoned the mob, assembled the mob and lit the flame of this attack.

"And, aware of the rioters’ chants to 'hang Mike Pence' the President responded with this sentiment: 'maybe our supporters have the right idea.' That Mike Pence 'deserves it." 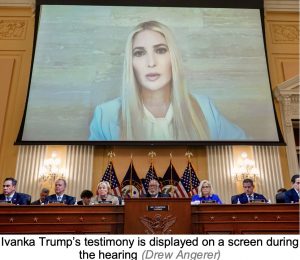 Cheney played portions of video depositions from senior Trump Campaign spokesman Jason Miller, and Trump attorney Alex Cannon about their conversation with Trump that there was no evidence of election fraud, or, as put by former White House Chief of Staff Mark Meadows, "There is no there there."

Video was also shown of Trump's daughter and Senior Advisor, Ivanka Trump, saying that Bill Barr’s statement that the Department found no fraud sufficient to overturn the election, "affected my perspective. I respect Attorney General Barr so I accepted what he was saying."

Cheney went on to explain the focus of each of the upcoming hearings, including the campaign of misinformation and the frivolous lawsuits that resulted in Trump attorney Rudy Giuliani's suspension of license to practice law for “communicated demonstrably false and misleading statements to courts, lawmakers and the public at large."

She said the people will hear testimony about Trump's attempts, with the help of DOJ attorney Jeff Clark, to corrupt the Justice Department into sending letters to battleground states with false claims of election fraud and how Trump pressured state legislators and election officials to change election results. 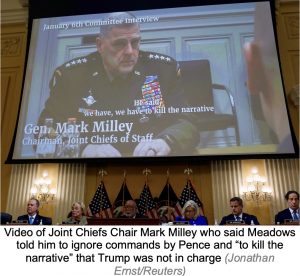 Cheney said the people will hear first-hand how DOJ officials and the White House Counsel threatened to quit, and how "multiple Republican Congressman," including Congressman Scott Perry (R-PA), sought presidential pardons in the weeks after January 6th "for their roles in attempting to overturn the 2020 election."

The fourth hearing will focus on Trump's "relentless," "illegal," and "unconstitutional" attempts to pressure Vice President Mike Pence to refuse to count electoral votes on January 6th. And, of how Trump's legal team, including John Eastman, continued their efforts to halt the count of electoral votes as the violent attack on Congress, and threat on Pence's life, were underway.

The final June hearings, said Cheney, will focus on events leading up to the insurrection and "how President Trump summoned a violent mob and directed them, illegally, to march on the U.S. Capitol." And, "how President Trump failed to take immediate action to stop the violence."

"You will hear a moment-by-moment account of the hours-long attack" from witnesses inside and outside the White House. 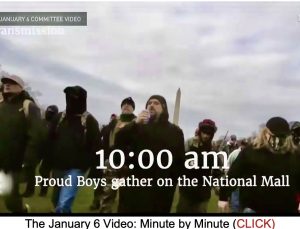 Chairman Bennie Thompson then turned the room's attention to a video, saying, "As we provide answers to the American people about January 6, it is important that we remember exactly what took place." He warned the audience of the extreme violence and that "this isn't easy to watch."

The Witnesses
At the close of the shocking video, which included never-before-seen footage and recordings from the day of the insurrection, Thompson introduced two witnesses.

Capitol Police Officer Caroline Edwards was knocked unconscious and injured while defending the US Capitol from the Proud Boys at the frontline perimeter of the grounds. Edwards provided compelling testimony of "the war zone" that the west front of the Capitol had become. 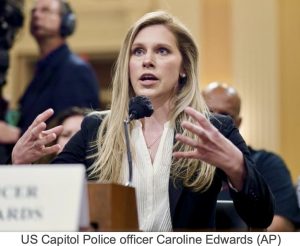 Her moving description of the "hours of hand-to-hand combat" and "slipping" on the blood of fellow officers, visibly shook many in the gallery, which included several of her colleagues. "It was carnage. It was chaos," said Edwards.

Among the officers attacked by her side was Brian Sicknick, who died several days later. Sicknick was one of 9 people who died during, or as a result of, the Capitol attack. Approximately 140 law enforcement officers were injured that day.

Documentarian Nick Quested, who was embedded with the Proud Boys leading up to, and during, the day of the attack, provided much of the unseen video footage. He provided first-hand details of the movements of rioters, including video of a planning meeting between the leaders of the Proud Boys and Oath Keepers.

The only Republican presidential candidate to fully embrace Climate Change has suspended his campaign.