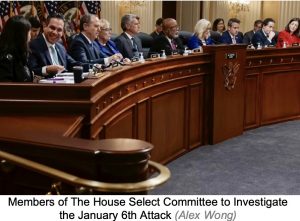 The House Select Committee to Investigate the January 6th Attack held its ninth and final public hearing yesterday, unveiling damning new evidence, unseen footage from the day of the attack, and its decision to issue a subpoena to the person "at the center of this story," former President Donald Trump.

Each of the televised hearings has dramatically and meticulously unraveled components of what Committee Chairman Bennie Thompson (D-MS) described as "a multipart plan led by former President Donald Trump to overturn the 2020 election."

Thompson said the facts have proven that "In a staggering betrayal of his oath, Donald Trump attempted a plan that led to an attack on a pillar of our democracy...This is a question about accountability to the American people. He is required to answer for his actions."

"The most striking fact is that all this evidence comes almost entirely from Republicans," he said -- a case made through the testimony of longtime aides, Republican state officials and legislators, Trump campaign officials, senior Justice Department and White House staff, his closest advisors and family. 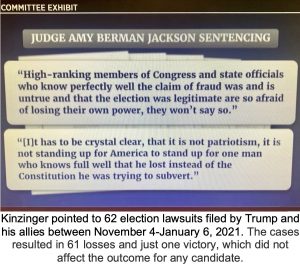 Introducing a review of key facts and new evidence, Vice Chair Liz Cheney (R-WY) said, "Today we will focus on President Trump's state of mind, his intent, his motivations, and how he spurred others to do his bidding, and how another January 6th could happen again if we do not take necessary action to prevent it."

"Our institutions," said Cheney, "only hold when men and women of good faith make them hold regardless of the political cost."

Since the committee's last public hearing on July 21st, she said, "we've received new and voluminous documentation from the Secret Service, which we continue to analyze. We've received new witness testimony, including about efforts to obstruct our investigation and conceal key facts."

The committee "may ultimately decide to make a series of criminal referrals to the Department of Justice, but we recognize that our role is not to make decisions regarding prosecution," said Cheney. 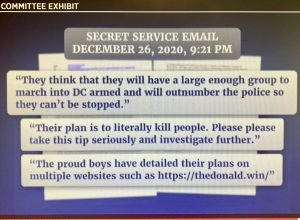 In the second half of the hearing, Congressman Adam Schiff, who presided over Trump's first impeachment trial, delved into new evidence revealing that the Secret Service and the President were aware of the level of threat to the Capitol and lawmakers well in advance of January 6th.

Schiff reported that "even though documents and materials related to January 6th had already been requested by the Department of Justice and Congress...Secret Service text messages from this period were erased in the days and months following the attack on the Capitol." In a July statement, the Homeland Security Inspector wrote the messages "were erased as part of a device replacement program.”

With the Secret service's renewed cooperation, the committee has subsequently been able to obtain nearly one million emails, recordings, and other electronic records, revealing "substantial new evidence about what happened on January 6th and the days leading up to it." That review, he said, continues.

Schiff provided new evidence of intelligence communication between the FBI, US Capitol Police, Metropolitan Police and other agencies forewarning the possibility of violence at the Capitol. It also included communication between Trump allies like Roger Stone and Steve Bannon and leading insurrectionist groups The Oath Keepers and The Proud Boys. 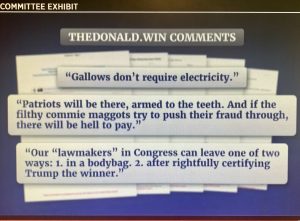 In addition to the Secret Service, the documented warnings were directly available to senior White House and administration officials, and the President, who knew he was sending an "armed and angry" crowd to the US Capitol.

"This was the last most desperate and dangerous prong of his plan to disrupt the joint session and prevent the orderly transition of power," said Schiff.

"Despite this, certain White House and Secret Service witnesses previously testified that they had received no intelligence about violence that could have potentially threatened any of the protectees on January 6th, including the Vice President."

"The committee is reviewing testimony regarding potential obstruction on this issue, including testimony about advice given not to tell the committee about this specific topic. We will address this matter in our report," said committee member Pete Aguilar (D-CA).

Congressman Jamie Raskin presented testimony from some of the President's most important political allies, family members, and senior staff -- all begged him to tell his supporters, who had now breached the Capitol building, to disperse and go home. "They included Sean Hannity, Laura Ingraham, his son Donald Trump Jr, the House minority leader Kevin McCarthy, others in Congress, and officials in the cabinet and the executive branch." 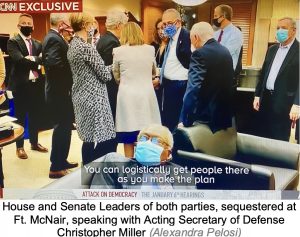 All appeals to Donald Trump were rejected, with multiple witnesses testifying that the President just continued to watch the bloody attack unfold on television. He did not call his secretary of defense or the National Guard, the chief of the Capitol Police, or the chief of the Metropolitan Police Department.

As Trump sat glued to Fox News in his dining room, "members of Congress and other government officials stepped into the gigantic leadership void created by the president's chilling and studied passivity," said Raskin.

The committee then showed previously unseen footage of Congressional leaders, both Republicans and Democrats, as they were taken to a secure location during the riot, and as they scrambled to get federal law enforcement deployed to the scene to put down the violence and secure the Capitol complex. Among those depicted were Senator Majority Leader Chuck Schumer, House Speaker Nancy Pelosi, House Majority Leader Steny Hoyer, Senate Majority Leader Mitch McConnell, Majority Whip John Thune and Vice President Mike Pence.

Trump's only reaction when told that Pence's life was in danger from the insurrectionists who were yelling "hang Mike Pence," was to fan the flames of hatred by sending out a 2:24pm tweet condemning Pence for lacking the "courage" to prevent the Electoral College from certifying Joe Biden's victory.

It was not until 6:01pm that Trump would finally tell the "great patriots" to go home.

"It was President Lincoln," said Raskin, "at the start of the Civil War in 1861, who best explained why democracy rejects insurrection. Insurrection, he said, is a war upon the first principle of popular government, the rights of the people. American democracy belongs to all the American people, not to a single man."

"We are obligated to seek answers directly from the man who set this all in motion. And every American is entitled to those answers, so we can act now to protect our Republic." With that, the committee unanimously passed her resolution to subpoena relevant documents and testimony under oath from Donald John Trump in connection with the January 6th attack on the United States Capitol.

The select committee is expected to complete its investigation and report by the end of the year.

November 17, 2022  Women account for 52% of the population, but less than 30% of the current United States Congress. While overall strides for women were made in the 2022 midterm elections, parity...