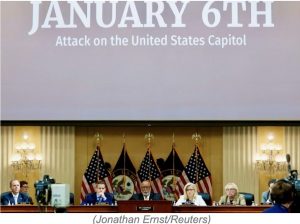 The fifth hearing of the House Select Committee to Investigate the January 6th Attack, commenced at 3:00pm Thursday -- the last to be held before Congress recesses.

Over the last two weeks, the Committee, charged with conducting "an investigation of the relevant facts and circumstances relating to the attack on the Capitol," has presented the findings of its year-long investigation to the American people.

Before a captive audience of 10-20 million viewers per hearing, committee members have presented a sometimes shocking narrative of former President Donald Trump's "sophisticated seven-part plan to overturn the presidential election and prevent the transfer of presidential power."

One that ended in violence, and desecration of an institution and our constitution. 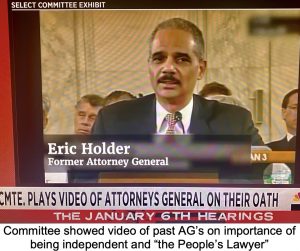 "In our previous hearings," said Thompson, "the Select Committee showed that then President Trump applied pressure at every level of government, from local election workers up to his own vice president...to help him steal an election he actually lost. Today we'll tell the story of how the pressure campaign also targeted the federal agency charged with enforcement of our laws, the Department of Justice.

"We'll hear from other senior Justice Department officials (who) resisted Mr. Trump's effort to misuse the Justice Department as part of his plan to hold on to power... to help legitimize his lies, to basically call the election corrupt, to appoint a special counsel to investigate alleged election fraud, to send a letter to six state legislatures urging them to consider altering the election results. 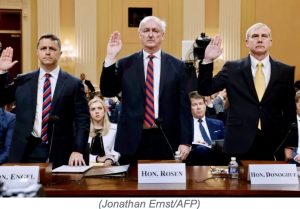 "And when these and other efforts failed, Donald Trump sought to replace Mr. Rosen, the Acting Attorney General, with a lawyer whom he believed would inappropriately put the full weight of the Justice Department behind the effort to overturn the election."

The committee heard riveting live testimony from Rosen, former Acting Deputy Attorney General Richard Donoghue, and former Assistant Attorney General for the Office of Legal Counsel Steven Engel, who together led the DOJ in the final weeks of the Trump administration.

All three spoke at length and in well-documented detail of the sequence of events that occurred between Election Day and January 6th, as previewed by Thompson, Cheney and Kitzinger.

At the center of the plot was Jeffrey Clark, a lower-level DOJ official who served as acting head of the Civil Division and head of the Environmental and Natural Resources Division, who was introduced to Trump in late December by Congressman Scott Perry (R-PA). 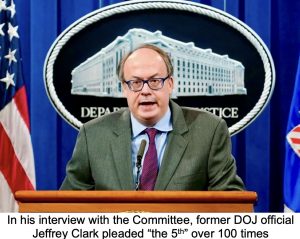 Clark, who embraced Trump's "big lie" of voter fraud, repeatedly ignored the chain of command regarding communication with the President and began working with personal Trump attorney John Eastman, the architect of the "fake electors" plot.

Rudy Giuliani and former Trump campaign attorney Sidney Powell were also co-conspirators in various parts of the plan, as was new White House attorney Ken Klukowski, who started working with the administration December 15, and was working privately with Eastman.

By mid-December Bill Barr was on his way out, officially departing December 23. Two days before Barr held a press conference, in concurrence with Rosen, stating that the Justice Department saw no evidence of widespread fraud that would have changed the election results, and there was no reason to appoint a special counsel.

On the same day, several Republican members of Congress, including Perry and Marjorie Taylor Greene (GA), met with the President, encouraging him, as Giuliani said, to put someone in charge of the Justice Department "that is not frightened of what is going to be done to their reputation."

The hearing also revealed that most of those members pursued a presidential pardon in the weeks after the January 6 Capitol attack, reportedly related to their "defense of the President's positions."

Rosen and Donaghue testified to now daily pressure calls from Trump. In one 90-minute conversation on December 27, in which the President railed about a false stream of voter corruption in different states, Donaghue said he and Rosen "bluntly" addressed each allegation, insisting the theories had no merit.

On December 28, Clark, now deeply engaged, sent Donaghue and Rosen a draft letter for their signatures. The letter, to go to Georgia election officials, suggested a path for decertifying the election results. Donaghue immediately rejected the letter, saying "This is nothing less than the Justice Department meddling in an election" and to send it "would have spiraled the country into a constitutional crisis." 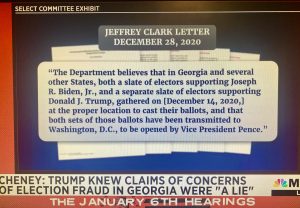 In another effort, on December 29, Trump asked the DOJ to file a draft lawsuit, prepared by outside Trump attorneys, with the Supreme Court. Engel promptly rejected the proposal.

After a December 31 meeting with a frantic Trump, Meadows instructed Rosen to investigate still more voter fraud allegations, including one that Italy was switching votes from Trump to Biden via satellite.

All culminated in a January 3 Oval Office meeting between Trump, senior DOJ and White House officials to discuss a change in department leadership.

That morning, Clark told Rosen that Trump had offered him the AG's position, but that he would not take the job if Rosen reversed his position and signed the Georgia letter. Rosen refused.

At the Oval Office meeting that evening, White House Counsel Pat Cipollone registered his objections, saying the letter would be "a murder-suicide pact." That was echoed by White House Counsel Eric Herschmann and others, along with vehement and unanimous opposition to Clark, who was present, for his lack of experience.

Clark appealed to the President, saying that if he was made acting Attorney General, he promised "real investigations that would...uncover widespread fraud...a last opportunity to set things straight with this defective election" in a way that the President would think most appropriate. That also meant the letter to Georgia and other states would go out.

Trump challenged Rosen, saying what did he have to lose by putting Clark in charge as "you aren't going to do anything."

Rosen responded, "Mr. President, you're right that I'm not going to allow the Justice Department to do anything to try to overturn the election. That's true. But the reason for that is because that's what's consistent with the facts and the law, and that's what's required under the Constitution. So, that's the right answer and a good thing for the country, and therefore I submit it's the right thing for you, Mr. President."

Trump relented after Donaghue told him that if Clark was installed and the plan executed, he "'would resign immediately." More powerfully Engel, having polled the Assistant Attorney Generals that afternoon, told Trump he would be facing the resignation of the DOJ's entire leadership and potentially hundreds more from US Attorneys and offices nationwide within 72 hours.

"Clark," said Engel, "would be left leading a graveyard."

In his closing statement, Kinzinger summarized, "The conspiracy theories were false. The allegation of a stolen election was a lie. The data left no room for doubt, nothing to question, and the Constitution left no room for President Trump to change the outcome of the election. 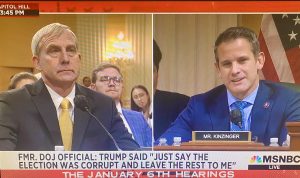 "But we're here today because the facts were irrelevant to President Trump. It was about protecting his very real power and very fragile ego, even if it required recklessly undermining our entire electoral system by wildly casting baseless doubt upon it. In short, he was willing to sacrifice our republic to prolong his presidency.

"I can imagine no more dishonorable act by a president. We owe a great debt of gratitude to these men you've heard from here today...who put their country first. When the leader of the free world demanded otherwise, they threatened to resign rather than corrupt our democracy...

"As it's said, the only thing necessary for evil to succeed is for good men to do nothing."

Next Up
July Hearings: TBD. The House will be in recess until July 12.