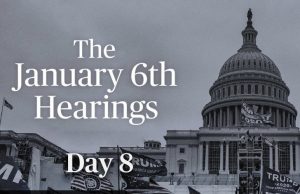 In the season finale to this summer's most watched drama, the House Select Committee to Investigate the January 6th Attack held its eighth hearing last night.

Each of the televised hearings has dramatically and meticulously unraveled components of what Committee Chairman Bennie Thompson (D-MS) described as "a coordinated, multi-step effort to overturn an election, overseen and directed by Donald Trump."

Most effectively, the case has been made through the testimony of those closest to the former President, including his White House staff, advisors and family.

As summarized by Vice Chair Liz Cheney (R-WY), the Committee has addressed each element of that plan, while receiving new evidence and witness testimony. "Doors have opened, new subpoenas have been issued, and the dam has begun to break." 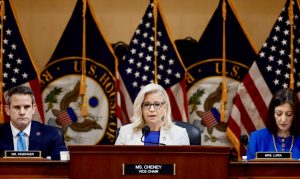 Thursday's hearing focused on the 187 minutes when, after inciting a mob of thousands to march to the Capitol, Trump, now back at the White House, defiantly refused all pleas to take action to end the violence.

As Cheney noted, and as laid out in previous hearings, at that point Trump's effort's to overturn the election had failed. That included his pressure campaign to get his Vice President to illegally reject votes and delay the proceedings, his efforts to convince state officials and state legislatures to flip their electoral votes to his favor, and Trump's attempts to corrupt the Department of Justice to aid his scheme.

Congresswoman Elaine Luria (D-VA) and Congressman Adam Kinzinger (R-IL), both military veterans, led the hearing and the questioning of witnesses. 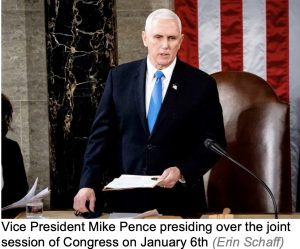 In the unfolding narrative of that day, Luria said by the time Trump had finished his remarks to the crowd at the Ellipse at 1:10pm, "the Vice President was in the Capitol, the Joint Session of Congress to certify Joe Biden’s victory was underway, and the Proud Boys and other rioters had stormed through the first barriers and begun the attack."

Retired DC police Sgt. Mark Robinson, who was in the presidential motorcade on January 6, testified that Trump was "upset" about not going to the Capitol and that there was a "heated conversation." Earlier testimony by Cassidy Hutchinson, top aide to White House Chief of Staff Mark Meadows, detailed a physical altercation at that time between Trump and his lead Secret Service agent Bobby Engel.

Another unidentified former White House security official said in a recording that "we were all in a state of shock" over Trump's plan to go to the Capitol. "We all knew what that implicated and what that meant, that this was no longer a rally. That this was going to move to...an 'insurrection,' 'coup,' whatever."

Trump relented and returned to the White House at 1:21pm, when he was told that the capital grounds had been breached. He took no action, but instead went to his personal dining room next to the Oval Office, where he watched Fox News for over two and a half hours. There is no official record in the president's call log or daily diary of his activities during that time. The White House photographer was also instructed not to take pictures. 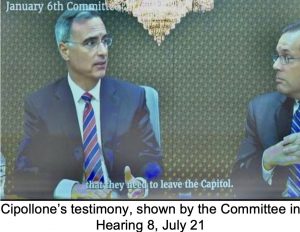 Staff continued to plead with him to condemn the violence and instruct the rioters to leave the Capitol, to no avail. White House Senior Counsel Pat Cipollone confirmed that Trump made no calls to the Vice President or his staff, to the Attorney General, Homeland Security, the Secretary of Defense, Secret Service, National Guard or any law enforcement. Instead, Trump rebuffed calls from the Pentagon and others to coordinate a response to the attack.

This was also confirmed by a number of other staff, including National Security Advisor to the Vice President General Keith Kellogg, White House Attorneys Eric Hershmann, Press Secretary Kaylie McEnany, Trump assistant Nicholas Luna, and by the Committee itself in interviews with the various agencies.

Of Trump's inaction, Chairman of the Joint Chiefs of Staff General Mark Milley said, "You're Commander in Chief, you have an assault going on in the Capitol of the United States of America. Then nothing? No call. Nothing? zero?"

In her June 28 testimony, Hutchinson spoke of a confrontation she witnessed between Meadows and Cipollone, who said "something needs to be done or people are going to die and the blood is going to be on your f***ing hands. This is getting out of control...They're literally calling for the vice president to be f***ing hung." Unfazed, Meadows said the President "doesn't want to do anything...you heard him, Pat. He thinks Mike deserves it. He doesn't think they're doing anything wrong." 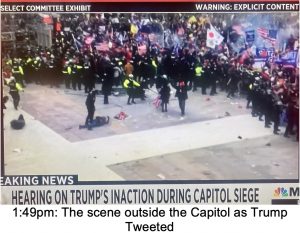 Instead, at 1:39pm, according to outside phone records, Trump called his personal attorney Rudy Giuliani, and then subsequently asked McEnany for a list of Senators for him to call to lobby them to delay or overturn the certification of the election.

At 1:49pm, as the DC police declared a riot at the Capitol, Trump tweeted out a link to his speech at the Ellipse, making no mention of the attack underway. At 2:13pm, Rioters breached the Capitol.

Among the many people imploring Trump to call off the mob of his supporters was House Minority Leader Kevin McCarthy (R-CA). When Trump refused, McCarthy reached out to the President's daughter and son-in-law, Ivanka Trump and Jared Kushner, telling them "it was getting really ugly over at the Capitol."

In the interim, National Security Council chat records detailed the escalating attack inside the Capitol and efforts by Pence's security team to evacuate the Vice President from the House Gallery.

When aides told Trump that the Vice President’s life was in danger from the insurrectionists who were yelling "hang Mike Pence," Trump reacted by sending out a 2:24pm tweet condemning Pence for lacking the "courage" to prevent the Electoral College from certifying Joe Biden's victory.

At that point the NSC chat reports "explosions on the Rotunda steps" and that Pence's Secret Service "at the Capitol does not sound good right now."

"The members of the VP detail at this time were starting to fear for their own lives," the security professional said. "There was a lot of yelling, a lot of very personal calls over the radio, so it was very disturbing...there were calls to say goodbye to family members."

Trump's tweet, testified Pottinger, "looked like fuel being poured on the fire." Matthews said she thought it "was essentially him giving the green light" to his supporters storming the Capitol. As Trump's former spokesperson, Matthews said, "I've seen the impact that his words have on his supporters. They truly latch onto every word and every tweet that he says," calling Trump's refusal to call off the mob "indefensible."

At 2:38pm, apparently convinced by Ivanka Trump, the President, who refused to put out anything mentioning "peace," compromised with a tweet that urged rioters not to harm Capitol Police and to "stay peaceful." 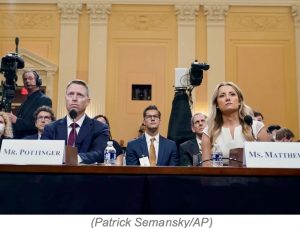 The committee played audio of a conversation among members of the Oath Keepers live-reacting to the tweet. One said, "That's saying a lot by what he didn't say, he didn't say not to do anything to the Congressmen." Plenty of laughter could be heard following the comment.

Staff persisted in pushing for a more forceful statement, including Matthews, McEneny, White House attorney Pat Philbin, Secretary of Labor Eugene Scalia, Meadows aide Ben Williamson and Deputy White House Press Secretary Judd Deere. Testimony was shown for the first time of Donald Trump Jr. weighing in via a tweet to Meadows, saying "(Trump) has got to condemn this sh**. Asap...They will try to f*** his entire legacy on this if it gets worse."

At 3:31pm Meadows also received a text from conservative news commentator Sean Hannity encouraging the President to publically call on the insurrectionists to go home. Similar calls and texts were received from administration officials, members of Congress, friends and other media personalities.

By this time Pence had been evacuated to a secure location and, according to Milley, was issuing orders to the military to clear the Capitol and stop the violence. Milley said Meadows called him to say they needed the “narrative” that Trump was still in charge and making decisions, not Pence, despite Trump's refusal to act. 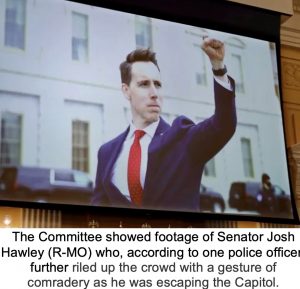 President-elect Biden also went on television to demand that Trump call an end to the siege.

It was not until 4:17pm that Trump finally made a video statement, filmed in the Rose Garden.

New video showed Trump, while being filmed, refusing to say the election had been decided. In the end, he dismissed the statement prepared by staff and ad-libbed his message.

While telling the rioters to go home, he also told them they "were special" and that "he loved them."

The violence continued for hours before the Capitol was secured and Congress reconvened at 8:00pm and certified the 2020 presidential election results.

It was not before Trump had his last word, however. In a 6:01pm tweet, Trump said. "These are the things and events that happen when a sacred landslide election victory is so unceremoniously and viciously stripped away from great patriots who have been badly and unfairly treated for so long. Go home with love and in peace. Remember this day forever!"

Next Up
The next set of hearings will take place in September after the Congressional Summer recess.