This Thursday, the House Select Committee to Investigate the January 6th Attack will hold its first public hearing since launching its investigation over a year ago.

"The committee will present previously unseen material documenting January 6th, receive witness testimony, preview additional hearings, and provide the American people a summary of its findings about the coordinated, multi-step effort to overturn the results of the 2020 presidential election and prevent the transfer of power," the committee said in a statement.

The prime-time 8:00pm slot underscores the committee's intent to present its case in the court of public opinion, and refocus a divided nation otherwise distracted by the economy and other issues going into the midterms.

The investigations
There are two primary investigations underway related to the events of January 6th: That of the Select Committee, and the criminal probe being conducted by the Department of Justice (DOJ), with the two working together on coordination of information.

Although the committee can refer cases for prosecution, it is the Justice Department that ultimately decides whether to file any charges. 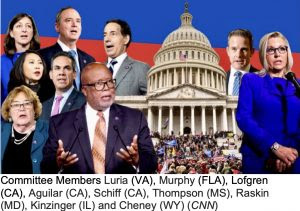 The January 6th Select Committee, created by a vote of Congress on May 19, 2021, has obtained more than 125,000 documents and interviewed over 1,000 people, including those in the immediate sphere of former President Trump leading up to, and during the attack.

Some 90 subpoenas have been issued to witnesses and/or for records, including Trump lawyers Rudy Giuliani and John Eastman, former US Attorney General William Barr, and over 50 former top White House and administration officials and campaign advisors. At least five GOP members of Congress have provided depositions. 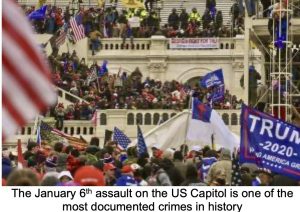 The investigation by the Department of Justice, the largest in its history, has so far resulted in close to 850 people from nearly all 50 states and the District of Columbia being charged with crimes, some multiple, connected to the insurrection.

Charges in District and Superior Court (as of May 5, 2022) include:
* 255 with assaulting, resisting or impeding officers or employees, including 85 with using a deadly or dangerous weapon or causing serious bodily injury to an officer.
* 10 with assaulting a member of the media, or destroying their equipment.
* 700 with entering or remaining in a restricted building or grounds, including 80 with a dangerous weapon. 50 were charged with destruction of government property, and over 35 defendants with theft of government property.
* 280 with corruptly obstructing, influencing, or impeding an official proceeding, or attempting to do so.
* 50 with conspiracy, either: (a) to obstruct a congressional proceeding, (b) to obstruct law enforcement during a civil disorder, (c) to injure an officer, or (d) some combination of the three.

Pleas: 280 individuals have pleaded guilty to various federal charges, from misdemeanors to felony obstruction, many of whom will face incarceration at sentencing. 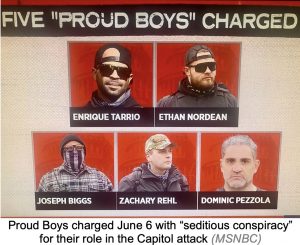 Sentencings: 165 federal defendants have been sentenced, including 65 to periods of incarceration, more than 50 to a period of home detention, and the others to probation with no term of incarceration.

A number of additional indictments have been passed down in the last month, including yesterday's announcement that five members of the Proud Boys, including the group’s former national chairman Enrique Tarrio, have been charged with "seditious conspiracy" and other offenses related to the US Capitol breach.

The government estimates that as many as 2,500 people who took part in the events of January 6th could be charged with federal crimes.

What To Expect
The committee's findings will be presented in six hearings spread throughout the month of June, with the next scheduled for the morning of June 13.

Although the committee's progress has been monitored through public court filings, they have provided only a small window into the breadth and depth of the investigation -- the facts of which, “will blow the roof off the House," according to Congressman Jamie Raskin (D-MD), a member of the committee. 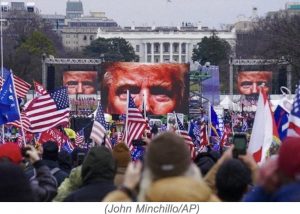 The first hearing is expected to provide an opening argument and overview of the multi-faceted events leading up to and during the Capitol insurrection, including the organizers, funders and conspirators -- as instigated at the provocation of then-President Donald Trump.

Throughout the hearings, the American public can expect an unfolding narrative, depicted through documentation, video and witness testimony, of a premeditated plot by Trump and his allies to overturn the results of Joe Biden’s electoral victory -- described by a committee source to PBS as a "roadmap of criminality."

The very nature of the violent attack on the Capitol, captured in thousands of hours of video, guarantees a certain level of sensationalism to the hearings, which are being compared to Watergate, the 1972 political scandal that toppled a US President 50 years ago.

Unlike the riveting Watergate hearings, which were initiated by Senate leaders in both parties, the GOP has not only fought the committee's efforts at every turn, but has embraced the underlying motivation for the attack, Trump's "big lie" of election fraud.

Public perception of the hearings, which begin just five months before the 2022 elections, will be a critical test of Trump's enduring influence among a large swath of GOP voters, and a critical test of messaging and credibility for Democrats.

The Witnesses
Only two witnesses have been announced to date: Documentarian Nick Quested, who is expected to testify about his experience filming members of the Proud Boys in the week leading up to and on January 6, and Capitol Police Officer Caroline Edwards, who was injured during an altercation involving members of the Proud Boys while defending the US Capitol during the riot.