September 26, 2019
On Tuesday, President Donald Trump became the fourth US President in history to be the subject of an official impeachment inquiry.

The announcement by House Speaker Nancy Pelosi follows over two years of ongoing investigations, spanning six Congressional committees and investigations by a Special Counsel, which touched off criminal inquiries at the federal state and local levels. All involve President Donald Trump, his associates, campaign, inauguration, family and businesses. 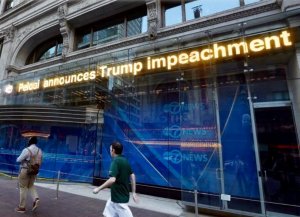 How It Works
The House of Representatives has the sole power to impeach a president, but removal from office is contingent upon trial and conviction by the United States Senate.

Think of impeachment by the House, which requires a majority vote (50+1%), as an indictment in regular court proceedings.  If the motion, or indictment, passes, then it goes to the second stage of a trial before a judge and jury, which is the Senate's role, and requires a 2/3 vote of those present to convict and remove the president from office.

In the House, which is controlled by the Democrats 235-198 (plus one Independent and one vacancy), an impeachment would require 218 votes. According to NBC News, as of today, 219 House Members have publicly indicated they would support some form of impeachment action against the President. 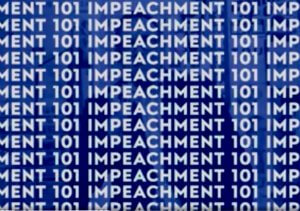 Only two US Presidents have been impeached: Andrew Johnson, in 1868, for violation of the Tenure in Office Act, and Bill Clinton, 1998, for perjury and obstruction of justice.  In both cases the Senate failed to convict. Impeachment proceedings against Richard Nixon were commenced in 1974, but he resigned from office before the full House voted.

The Alternative
The only other option for ousting a president involves removal by the Cabinet.

Originally intended for transfer of power to address illness in office, the 25th Amendment to the Constitution allows for a sitting vice president and a majority of the executive branch's cabinet to, upon agreement, transfer power out of the hands of a sitting president. 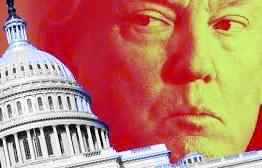 If Trump were to leave office before his term is out, the White House goes, in order of succession, to Vice President Mike Pence, Speaker of the House of Representatives Nancy Pelosi, then President Pro Tempore of the Senate Chuck Grassley.

As a coup by the Vice President and the Cabinet is highly unlikely, the battle over the President's future is, for now, in the hands of Congress.

What Next?
In the past, the allegations have gone to one committee, usually Judiciary, for investigating and reporting back to the full House.

As to not reinvent the wheel, the six House committees already investigating Trump will proceed "under that umbrella of impeachment inquiry," said Pelosi.

The committees -- Judiciary, Intelligence, Ways and Means, Financial Services, Oversight and Foreign Affairs -- have already established clear areas of investigation and, in some cases, are already in court and constitutional battles with Trump and his attorneys.

Each of the committees will provide input for inclusion in articles of impeachment written by the House Judiciary Committee, which will then vote on referring them to the full House of Representatives for a vote.

If the House impeaches, then it goes to the Senate, which is controlled by Republicans 53-47. It would take 67 votes to convict the President, which means that if every Democrat voted for conviction, 20 Republicans would have to cross over to remove Trump from office.

November 3, 2020 More than 95 million Americans have already cast their ballots going into election day. Today, November 3, 2020, we take back our country. While we await the final results —...