With the announcement by Congresswoman Karen Bass (D-CA) yesterday that she will not be running for reelection, the US House casualty list now stands at 18 members, including nine Democrats and nine Republicans who have declared their retirements or plans to leave Congress to run for another office.

An additional seven special elections have or will take place for members who have left office early.

The partisan breakdown of the 117th Congress of the US House of Representatives stands at 222 Democrats to 213 Republicans, including three vacancies. 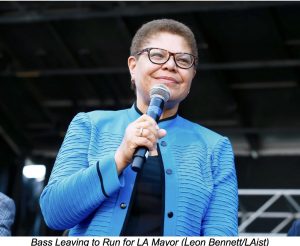 Bass, who has represented the L.A.-based California 34th Congressional District since 2011, is leaving to run for Mayor of Los Angeles in 2022, tweeting, “With my whole heart, I’m ready. Let’s do this -- together.”

Bass is the highest-profile candidate to enter the race to replace L.A. Mayor Eric Garcetti, who has been nominated by Biden to serve as Ambassador to India.

Her decision comes two weeks after the announcement by GOP Congressman Anthony Gonzalez that he would not be running for reelection in north-central Ohio's 16th Congressional District, ceding his seat after just two terms rather than face a grueling primary against a Trump-backed opponent. Gonzalez, who was one of ten Republicans who voted to impeach the former President after the January 6th Capitol riot, cited the deluge of subsequent threats against his family, calling Trump "a cancer for the country."

In addition to the 18 departing House members, four special elections have taken place where members have passed away in office or have left mid-term to seek another position. 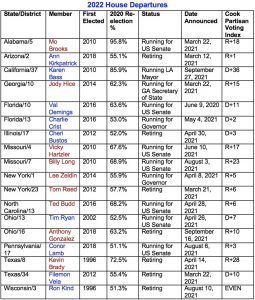 1) Ohio 11th CD: For the seat held by former Congresswoman Marcia Fudge, who left to join the administration as Biden's Secretary of Housing and Urban Development.

2) Ohio 15th CD: In the historically Republican district, Allison Russo (D) and Mike Casey (R) will face off in a general election November 2, 2021 to replace Congressman Steve Stivers (R) who left mid-term to become CEO of the Ohio Chamber of Commerce.

3) Florida 20th CD: In the contest to fill the seat of the late Alcee Hastings (D), who passed away in April, the primary will take place November 2, 2021 and the general election January 11, 2022.

All told, the departures are just the beginning of an anticipated rollout of retirements in the 2022 cycle. Over the last decade, an average of 48 members per congressional cycle have chosen not to seek reelection or to run for another office, and special elections where members have left office early have averaged 12.

Historically, the political party holding the White House in the midterm elections experiences losses in the House. For Democrats, that means every new departure brings them closer to losing their current narrow control in 2022.