At now less than eight months before the midterm elections, the number of members departing the US House of Representatives stands at 48.

Congressmen Fred Keller (R-PA) and Ted Deutch (D-FL) are among the most recent to announce their retirements, along with four-term Congresswoman Kathleen Rice (D-NY).

The latest casualty is two-term Texas Congressman Van Taylor (R) who dropped out of his reelection bid March 2. Taylor announced his decision just hours after finishing in first his five-way primary with 49% of the vote, which would have forced him into a primary runoff amid new revelations of an extra-marital affair. 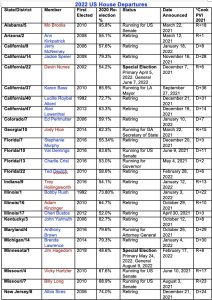 Two special elections are on the calendar to fulfill the remaining terms of members of Congress who vacated their seats early. The winners of those two contests will then have to run for reelection in the November 8 midterms.

The special primary in the Fresno County-based California 22nd Congressional District, vacated by Republican Congressman Devin Nunes to become CEO of the Trump Media & Technology Group, will be held April 5, 2022.

In the nonpartisan race, candidates of all parties will run in the same primary. If no candidate receives a majority of votes, the top two candidates will advance to the general election, scheduled for June 7, 2022.

A special election in southern Minnesota's First Congressional District will be held to replace the late Republican Congressman Jim Hagedorn, who lost a battle to kidney cancer February 17th. The primary will be held May 24, 2022, and the general election is scheduled for August 9, 2022. 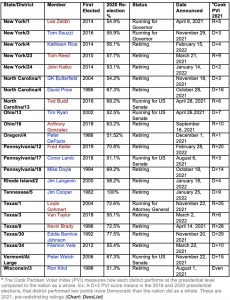 Democrats fared much better than anticipated in the decennial redistricting process, with the national map to date offering a fairly balanced political scenario.

Five states have yet to finalize their maps: Florida, Louisiana, Missouri, New Hampshire, and now, Ohio. Yesterday the Buckeye State's Supreme Court sent the Republican-led Redistricting Commission back to the drawing board for a fourth time.

Democrats will need every advantage to counter the traditional losses suffered by the party in the White House in off-election years. Since World War II, the president's party has lost an average of 26 seats in the House, and an average of four seats in the Senate.

Midterm elections are often regarded as a referendum on the sitting president or party's performance. President Biden's approval rating, based on an average of post-State of The Union polls, is 41%.

In yet another extraordinary year in American politics, however, the final verdict is far from determined.

May 23, 2018 In yesterday’s Dixie Primaries in Arkansas, Georgia, Kentucky, and in the Texas runoff, women continued to triump at the ballot box, including, potentially...

October 5, 2018 Campaign finance laws in the US have undergone a rollercoaster of change over the last decade, paving the way for unlimited spending by organizations outside the traditional...