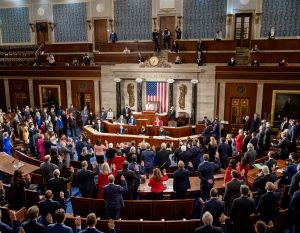 New York Congressman Tom Suozzi (CD3) became the latest to join the ranks of those leaving the US House of Representatives, announcing today that he will challenge incumbent Governor Kathy Hochul in the Democratic primary.

Suozzi is one of 30 US House members, including 18 Democrats and 12 Republicans, who have declared their intentions to leave Congress at the end of 2022.

The partisan breakdown of the 117th Congress of the US House of Representatives stands at 222 Democrats to 213 Republicans, including one vacancy. 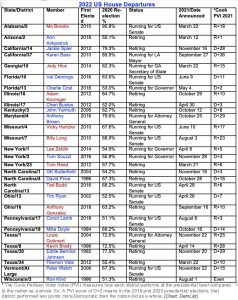 Among Republicans, Congressman Adam Kinzinger (IL-16), one of two GOP members on the January 6th Committee, has declared he won't seek reelection and is reportedly weighing a challenge to incumbent Democratic Governor JB Pritzker.

Although more than half of those departing are in congressional districts that are securely "red" or "blue," the decennial redistricting means that all 435 congressional elections in 2022 will take place in newly drawn districts.

Most 2022 candidates, however, do not yet know the contours of their new district as US Census numbers were historically delayed due to the pandemic and interference by the Trump administration.

Although typically delivered in December of the census year, the apportionment census block numbers used to redraw voting districts nationwide were not released until August 12th.

The final data represents a shift in the congressional district count in 13 states going into the 2022 midterms.

How and who controls the redistricting process varies in each state, and only eighteen states have finished drawing their new congressional maps (not counting the six states with only one congressional district).

All told, the departures are not the last of the anticipated rollout in the 2022 cycle. Over the last decade, an average of 48 members per two-year congressional cycle have chosen not to seek reelection to the US House. Special elections, where members have left office early, have averaged 12. 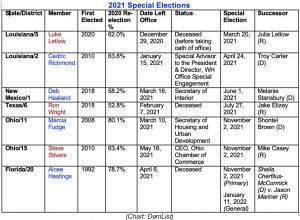 In addition to the standard departures, six special elections have taken place to replace members of Congress who have left office early or passed away in office before completing their term.

None have resulted in a change of party control of the seat, nor is the outcome of the seventh and last special election of 2021 for the district held by the late Congressman Alcee Hastings (FL-20).

Cherfilus-McCormick will face Republican nominee Jason Mariner in the January 11, 2022 general election. Mariner, an advertising executive, has previously been convicted of felony theft, cocaine possession, and obstructing justice, and at one time had a confederate flag tattoo.

Although Democrats currently hold a nine-seat majority in the US House, historically the party holding the White House in the midterm elections experiences losses in the House. 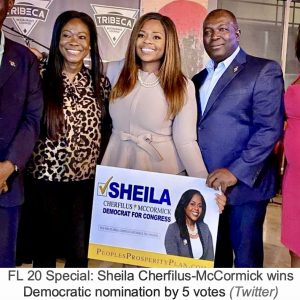 For Democrats, that means every new departure brings them closer to losing their narrow control in 2022.

With what is likely to be at least ten more retirements, and with two-thirds of the state redistricting plans still not finalized, it will be months before we have a clear picture of how fine a line that becomes.

June 28, 2017  One of the great traditions of our country is paying tribute to the history and contribution of various ethnic, advocacy and cultural groups on the US calendar. First declared...