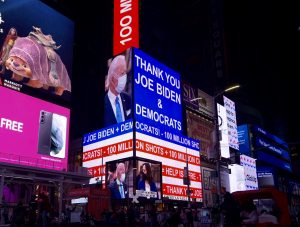 Just days after President Joseph Biden signed the American Rescue Plan Act of 2021 into law, the new administration kicked off its "Help Is Here Tour" to promote and engage the American people in the benefits of the historic plan.

In the cross-country tour, President Biden and Vice President Harris, as well as their spouses and administration officials, are traveling to battleground states to herald the benefits of his $1.9 trillion plan to defeat the coronavirus and boost the economy. 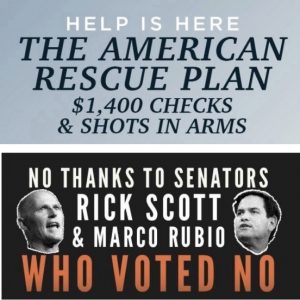 In the interim, the Democratic National Committee (DNC) has launched an all-out media blitz, flooding local media markets and online platforms with a 60-second TV and digital ad called "Help is Here" to promote the measure. Billboards have also gone up in Florida, Georgia, Wisconsin, South Dakota, Iowa, South Carolina and other states, calling out Republicans in Congress who voted against the stimulus checks and vaccination funds for Americans.

The Help Is Here Tour
The nationwide tour kicked off the week of Monday, March 15th, with Vice President Kamala Harris and Second Gentleman Douglass Emhoff in Las Vegas, where they visited the Three Square Food Bank before attending a listening session with members of the Las Vegas community affected by food insecurity. Harris was joined by Nevada Attorney General Aaron Ford in an afternoon meeting about training programs at the Culinary Union's academy. 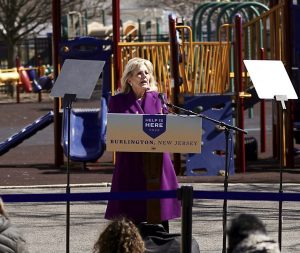 On Tuesday, Biden visited a flooring company in Chester, Pennsylvania to discuss the federal government's redesigned Paycheck Protection Program, while Harris held a listening session for small businesses at a Denver, Colorado restaurant. 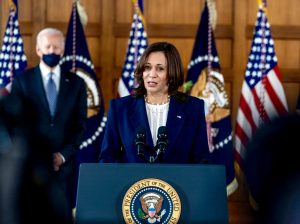 On Thursday, the reality of other crises facing our country and our communities was brought home with the tragic spa shooting rampage in Georgia that left eight people dead, including six Asian women.

On Friday, President Biden and Vice President Harris, who had already planned to visit the Atlanta-based Centers for Disease Control and Prevention to discuss the pandemic battle, immediately shifted to "consolers-in-chief" to address the tragedy.

They met with Asian American community leaders and local lawmakers to denounce the mass shooting, calling on citizens to unite against hate and speak out against racist violence targeting Asian Americans.

This week
March 22nd: On Monday, Vice President Harris traveled to Jacksonville, Florida, where she visited the County Community Vaccination Center, before heading to the Feeding Northeast Florida food pantry. 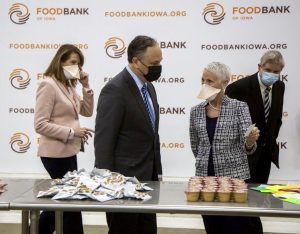 March 23rd: On Tuesday morning, President Biden was confronted by yet a second mass shooting in the United States in less than a week, where 10 people were murdered by a gunman in Boulder, Colorado.

That afternoon, on the 11th anniversary of the Affordable Care Act being signed into law, President Biden traveled to Columbus, Ohio to highlight how the American Rescue Plan will lower healthcare costs for many American families. 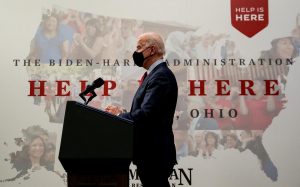 March 24th: Today, on the newly-proclaimed National Equal Pay Day, Biden hosted members of the champion US Women's national soccer team at the White House as part of his push to secure better pay for American women, who earn 82 cents on average for every dollar earned by men.

The President also announced that he was tapping Vice President Harris to lead his administration's effort to stem migration from Central America, as the United States deals with a surge of unaccompanied minors crossing its southern border. 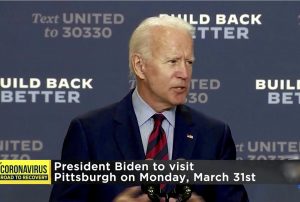 March 25th: On Thursday, the President will be attending a virtual summit of European Council leaders, including 27 EU heads of state and government, where the pandemic and vaccination policy will be at the top of the agenda. The meeting is also being billed as an opportunity for Biden to "rebuild" the transatlantic alliance, which was severely damaged under the Trump administration.

March 26th: On Friday, actress Jennifer Garner will join First Lady Jill Biden in Jasper, Alabama to promote the American Rescue Plan's aim of addressing child poverty. The two will visit the Jasper Area Family Service Center, as well as the YWCA of Central Alabama in Birmingham, to publicize how the stimulus package will tackle childhood poverty.