This week, the G7, or "Group of Seven," met in London, England, in the first face-to-face meeting of their countries' representatives since the onset of the coronavirus pandemic.

Other nations that attended as guests were Australia, South Korea and South Africa. India, which had been scheduled to attend in person, participated remotely after two of their delegation members tested positive for COVID-19, forcing their entire group into self-isolation. Since March, the rate of COVID-19 in India has skyrocketed, overwhelming the nation's public health systems in recent weeks. 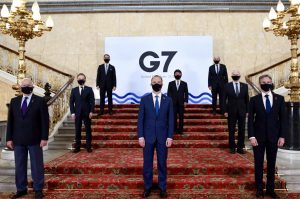 The Group of Seven
The G7 regards itself as "a community of values," with freedom and human rights, democracy and the rule of law, and prosperity and sustainable development as its key principles.

The initial group of six of the West's richest nations first met in 1975 in Rambouillet, France "to exchange ideas on possible solutions" to a global economic crisis. Canada joined the following year.

Russia joined the group in 1998 but was expelled in 2014 after it annexed Crimea from Ukraine.

The annual G7 summits serve as a platform for determining the course of multilateral discourse and shaping political responses to worldwide challenges. Although the summit doesn't have any legal or political authority, decisions by the democratic nations have the power to shift the direction of global economic growth.

The seven countries that, along with the European Union, comprise the G7, represent more than half the global economy. 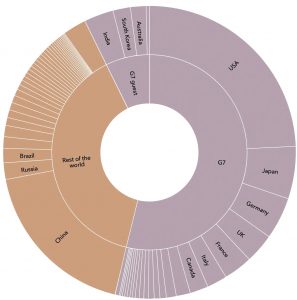 The International Monetary Fund (IMF) forecast that the G7 economies will generate $49.8 trillion of economic activity in 2021 at current prices, 54% of the global gross domestic product (GDP) of $92.7 trillion.

The Presidency of the group changes every year. As this year's president, the United Kingdom hosts several meetings on economic, environmental, health, trade, technology, development and foreign policy issues throughout the year.

This week's Foreign and Development Ministers' Meeting lays the groundwork for the main event next month -- the 47th G7 Leaders' Summit, which will be held June 11th-13th in Cornwall, southwest England.

The summit will mark President Joe Biden's first overseas trip as president and his first major opportunity to exercise his diplomatic prowess with other world leaders in attendance.

The UK has set out the following priorities for the 2021 Summit in June:
* leading the global recovery from coronavirus while strengthening our resilience against future pandemics
* promoting our future prosperity by championing free and fair trade
* tackling climate change and preserving the planet's biodiversity
* championing our shared values
The G7 members are also working to make this year's summit carbon neutral for the first time ever. 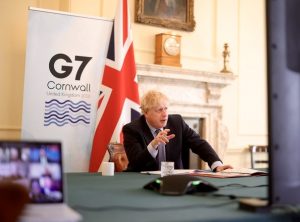 British PM Boris Johnson "will use the UK's G7 Presidency to unite leading democracies to help the world fight, and then build back better from coronavirus and create a greener, more prosperous future" (TheStandard)

The release of this week's post-meeting "communique" offered further insight into the priorities of a Western coalition once again strengthened by multilateral US involvement under a new presidential administration.

The report critiqued Russia for its disinformation campaigns and aggression in Crimea and Ukraine, and China for its "coercive economic policies" and human rights abuses. It also called for disinformation units to fight Russian bullying, called for Taiwan's meaningful participation in World Health Organization forums and the World Health Assembly, touched upon problems in Myanmar, Libya, Syria, Ukraine, Sahel and Tigray, and included language on COVID-19, girls' education and famine recovery.

March 24, 2021 Just days after President Joseph Biden signed the American Rescue Plan Act of 2021 into law, the new administration kicked off its “Help Is Here Tour” to promote and...

August 17, 2022 Voters in Alaska and Wyoming yesterday cast their ballots, delivering a vengeful victory for former President Donald Trump in The Equality State, and some hope for Democrats in The...