Posted May 8, 2020 | by KimS | in Coronavirus, DemDaily, Resource, Trump Administration

This morning the US Bureau of Labor Statistics released its monthly jobs report, showing that the US unemployment rate has soared to 14.7%, the highest since the Great Depression of the 1930s.

The devastating news, reflecting the effects of the coronavirus pandemic on the country's workforce and economy, is actually worse, as the unemployment rate doesn't depict the entire picture. 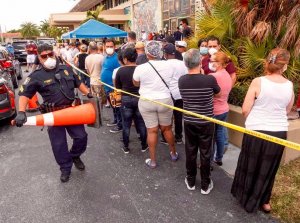 Long employment lines across the country, like this one in Miami, increase chances of COVID exposure (politicalhispanic.com)

That means, altogether, 43.2 million Americans were either out of work or working reduced hours in April.

In April, unemployment rate rose sharply among all major working groups, representing record highs for each series, with the exception of African Americans. 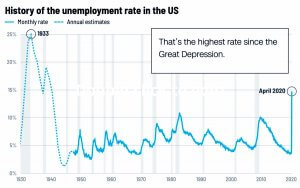 Among major industry sectors, the leisure and hospitality were the hardest hit, plummeting by 7.7 million, or 47%. Almost three-quarters of the decrease occurred in food services and drinking places (-5.5 million), followed by arts, entertainment, and recreation industry (-1.3 million) and the accommodation industry (-839,000).

President Trump, whose delayed response to the coronavirus pandemic has cost thousands of lives, continues to advocate for opening up businesses across the country, downplaying the economic fallout.

May 4, 2022 The 2022 primary season kicked off in full force yesterday with contests in Ohio and Indiana. The elections mark the first major test of former President Donald Trump’s influence...