All gloves were off in last night's Ninth Democratic Primary Debate, held in Las Vegas, Nevada with all contenders piling on surging newcomer Michael Bloomberg, while trying to remain their foothold on stage.

The debate, hosted by NBC News, MSNBC and the Nevada Independent, was the ninth of twelve, with three remaining debates before the 2020 Democratic Convention in July in Milwaukee. 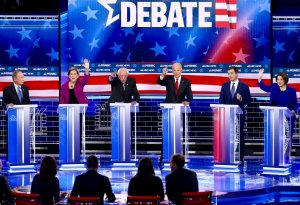 The Highlights
Unike the comparatively mild past debates, the contenders came out swinging, waisting no time in attacking the former New York City Mayor -- who was clearly a novice to debates.

Frontrunner Bernie Sanders set the tone at the outset, denouncing Bloomberg's controversial stop-and-frisk policing policy while Mayor of New York, "which went after African-American and Latino people in an outrageous way. That is not a way you're going to grow voter turnout."

On high voter turnout, Amy Klobuchar said, "I'm the one on this stage that had the highest voter turnout of any state in the country when I led the ticket... the only one with the receipts to have done that in Republican congressional districts over and over again."

Klobuchar then welcomed Mayor Bloomberg from "hiding behind his TV ads" and she called him out on a leaked Bloomberg campaign memo that suggested "three of us should get out of the way to 'pave the way' for him to become the nominee." Klobuchar, who held her own throughout the evening, said, "I've been told many times to wait my turn and to step aside. And I'm not going to do that now." 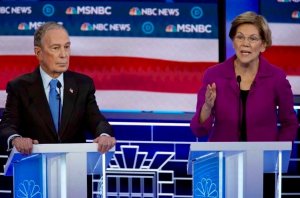 Warren: "Democrats take a huge risk if we just substitute one arrogant billionaire for another" (WashPost)

Bloomberg deflected to the larger picture, "I think we have two questions to face tonight. One is, who can beat Donald Trump? And, number two, who can do the job if they get into the White House?" arguing he is the candidate who can do both.

Joe Biden used the opportunity to make his case, pointing to Tuesday's NBC poll, which showed "Joe Biden is best equipped to beat Donald Trump...And it said that I can beat him in those toss-up states, too...I'm better positioned, according to (NBC's) poll, than anybody else to beat Donald Trump."

Senator Elizabeth Warren, in her strongest and most aggressive debate performances, flatly stated, "So I'd like to talk about who we're running against: a billionaire who calls women 'fat broads' and 'horse-faced lesbians' - and, no, I'm not talking about Donald Trump. I'm talking about Mayor Bloomberg,"

Bloomberg later defended his record with women, "I have no tolerance for the kind of behavior that the 'Me, Too' movement has exposed." He went on to say "70% of the people (at my foundation) are women...They get paid exactly the same as men. And in my -- City Hall, the person, the top person, my Deputy Mayor was a woman, and 40% of our commissioners were women...two weeks ago we were voted...the second best place in America" to work.

Warren: "I hope you heard what his defense was. I've been nice to some women." She challenged him on "dozens" of nondisclosure agreements signed over alleged sexual discrimination in his workplace. "Are you willing to release all of those women from those nondisclosure agreements, so we can hear their side of the story?" Bloomberg said no, in deference to their privacy. 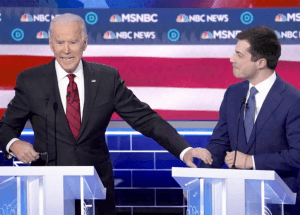 A fiery Biden stepped in, "Look, let's get something straight here. It's easy. All the mayor has to do is say you are released from the non-disclosure agreement. Period."

Bloomberg seemed surprisingly unprepared for the assaults. While his cool veneer may have been an attempt to show grace under pressure, it sometimes came across as less than enthusiastic.

Bloomberg shot back, "I have been very lucky, made alot of money, and I am giving it all away to make this country better. And a good chunk of it goes to the Democratic Party as well."

On why he has yet to release his tax returns, Bloomberg said he was working on it, "Remember, I only entered this race 10 weeks ago. All of my associates here have been at this for a couple of years."

Buttigieg:"That's right, we have. Engaging with voters and humbling ourselves to the backyards and diners."

Biden: "We have to change the tax code the way it is. That's why the wealthy have to start to pay their fair share. And that's why we have to focus on giving people the ability to garner wealth, generate wealth...We should start rewarding work, not just wealth." 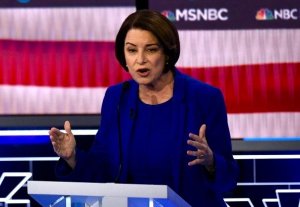 Amy Klobuchar on Warren comment: I take offense. Post-it notes were invented in my state" (NBC)

Warren, later described as having "brought a gun to a knife fight," went after the field on healthcare. She called Buttigieg's plan a "thin version of a plan that would leave millions of people unable to afford their healthcare. It's not a plan, it's a powerpoint. and Amy's plan is even less. It's like a Post-it-note, insert plan here."

Warren went on, "Bernie has a good start, but instead of expanding and bringing in more people... his campaign relentlessly attacks everyone who asks a question."

Sanders has come under heavy criticism for vicious online attacks by his supporters against his opponents, and most recently, the influential Las Vegas Culinary Workers, which has criticized Sanders' healthcare plan.

Buttigieg (to Sanders): Senator, when you say that you disown these attacks...I believe you...But at a certain point...you have to accept some responsibility and ask yourself what it is about your campaign in particular that seems to be motivating this behavior more than others?"

Klobuchar: "I have an idea of how we can stop sexism on the internet. We could nominate a woman for candidate for president of the United States."

Midway there was a particularly contentious scrum among the candidates fighting to have their voices heard.

Bloomberg: "I can't think of a ways that would make it easier for Donald Trump to get reelected than listening to this conversation. It's ridiculous. We are not going to throw out capitalism. We tried that. Other countries tried that. It was called communism and it just didn't work.

Sanders: "let's talk about Democratic Socialism, not Communism Mr. Bloomberg. That was a cheap shot."

Sanders' closing called for unity, but not without a final shot at Bloomberg: "The bottom line is, all of us are united in defeating the most dangerous president in the modern history of this country. That we agree on...Bottom line here: Real change never takes place from the top on down, never takes place from an oligarchy controlled by billionaires. We need to mobilize millions of people to stand up for justice." 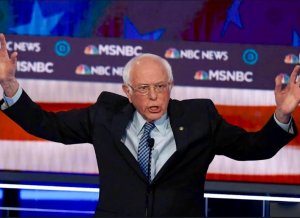 Today, before an audience in Utah, Bloomberg said,"The real winner in the debate last night was Donald Trump....we may well be on our way to nominating somebody who cannot win in November. And if we choose a candidate who appeals to a small base like Senator Sanders, it will be a fatal error."

Next Up: February 22nd Nevada Caucuses

June 5, 2017 “Arthur Schlesinger, Jr. called him “the most creative man in American public life.”  Ronald Reagan said, “He aroused the comfortable. He exposed the corrupt...