Few states hold more political importance nationally than Florida, and rarely more so than in the upcoming 2018 elections.

The country's largest bellweather state, with its 29 electoral votes, is critical to winning the White House. This November, the results in Florida will also affect Democrats' chances of taking control of the US Senate, the US House and the Governor's Mansion.

At the top of the ticket is incumbent Senator Bill Nelson, considered the most vulnerable of the 23 Senate Democrats running for re-election.

A three-term incumbent, Nelson is facing the most formidable challenger of his career -- Rick Scott, a two-term Governor and millionaire who is currently outspending Nelson by more than four-to-one. 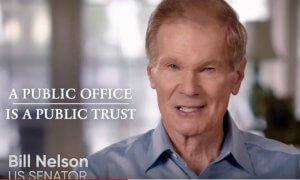 Although Nelson last won re-election by 13%, he is the only Democrat elected statewide in Florida, which delivered a 1.2% victory to Donald Trump in 2016.

Native Son
Bill Nelson is well-known to Florida voters, having first served in the Florida State House for four terms before being elected to Congress from Brevard County in 1978.

While in Congress Nelson, an Army veteran and attorney, became the first US House Member to fly in space --as a payload specialist on the 1986 Shuttle Columbia.

He retired from Congress to run unsuccessfully for Governor in 1990, then served as State Treasurer, Insurance Commissioner and Fire Marshal of Florida before winning the US Senate contest in 2000 to succeed retiring Republican Senator Connie Mack III. He defeated his GOP opponent, Congressman Bill McCollum, 51.04% to 46.19%.

Nelson was re-elected in 2006, easily fending off a challenge by former Florida Secretary of State and Congresswoman Kathleen Harris, 60.4% to 38.2%.  In his third re-election bid in 2012 he defeated Congressman Connie Mack IV, son of the former Senator, 55.2% to 42.2%.

Originally a conservative Democrat, Nelson's politics have moved to the left, although still considered among the last of the moderate white Southern Democrats in the upper chamber.

Millionaire Mogul
A former Navy veteran and attorney, Rick Scott is an Illinois native who amased a fortune as CEO and Chair of Columbia/Hospital Corporation of America before resigning amid the largest health care fraud investigation in US history.

Following his 1997 departure from Columbia/HCA, he founded Rick L. Scott Investments, based in Naples, Florida, and over the next decade purchased and sold numerous healthcare and manufacturing companies throughout North America.  He also was a partner of George W. Bush as co-owner of the Texas Rangers. 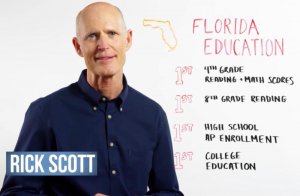 The 65-year old's current networth is estimated at $255 million.

Scott's first foray into politics was his 2010 run for Governor, in which he invested $75 million of his own money to beat former banking executive and state Chief Financial Officer Adelaide "Alex" Sink by 1.2%.

In his 2014 re-election campaign, Scott faced Charlie Christ, whom he had succeeded as Governor of Florida. Christ, who had served as a Republican Governor, switched to the Democratic Party to run against Scott, losing by 1%.

Under Scott, Florida's job creation far outpaced the rest of the nation, while wages were below-average and poverty rates were above-average.  He is known for his pro-death penalty stance, his A+ rating with the National Rifle Association and his attempts to restrict voting rights, which resulted in numerous courts ruling against him.

In 2016 he chaired a pro-Trump super PAC and the President has endorsed Scott in his Senate bid.

Repercussions
The outcome of the Florida US Senate race holds implications that go beyond Nelson's re-election. 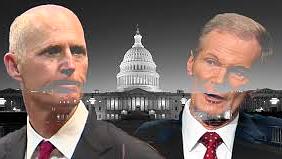 Scott and Nelson are in a dead heat in the polls  (image: FloridaPolitics)

Democrats will have to invest considerable resources in order to retain Nelson's seat in what is now a direct test of President Trump's avid support of the GOP nominee.

In Florida both congressional and state legislative district lines are drawn, or redistricted, by the state legislature, and are subject to gubernatorial veto - determining whether the state's 2020 map is drawn fairly, or gerrymandered to GOP advantage, for the next decade.

In addition, at least five of the Republican-held Congressional seats are part of the US House takeover equation.

June 27, 2018 Tuesday’s primaries produced big wins for progressive Democrats in their internal struggle for control of the direction of the party, while Republican primary voters sided with...

February 1, 2021 Biden and Harris are in the house! The 46th President and his Vice President are settled in the White House, along with the senior staff and advisors that make up their inner...