Today, at 6:50pm local time in Paris, cathedrals across France rang their bells in honor of Notre Dame Cathedral, marking the time that the 856-year-old church fell victim to a devastating fire on Monday. 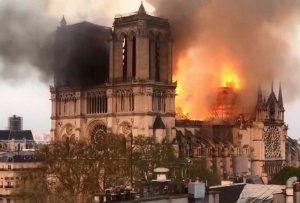 The Cathedral's 295-foot spire, renovated in the 19th century, was destroyed

It was not a terrorist or an arsonist attack that brought down the iconic symbol of beauty and history, but an accident whose origins are yet to be determined.

The Cathedral of Notre-Dame, or Notre Dame de Paris -- meaning "Our Lady of Paris" in French -- is considered one of the world's greatest medieval treasures.

History
Situated on the Seine River, in the Île de la Cité, the historical heart of Paris, Notre-Dame is the most famous of the Gothic cathedrals of the Middle Ages, with 12 million visitors annually.

Built on the ruins of two earlier churches which were themselves pre-dated by a Gallo-Roman temple dedicated to Jupiter, construction began in 1160 and the foundation stone was laid by Pope Alexander III in 1163. 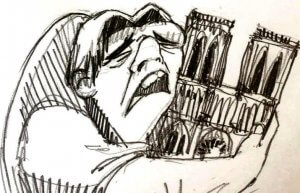 The altar was finished 20 years later; the two towers were constructed between 1225 and 1250, and the entire cathedral was completed in 1345.

Throughout the centuries Notre-Dame Cathedral has survived damage and deterioration. In 1548, rioting Huguenots damaged some of its statues, and after the French Revolution of 1786, it was rescued from possible destruction by Napoleon, who crowned himself emperor of the French in the cathedral in 1804.

Notre-Dame underwent major restorations by the French architects Jean-Baptiste Lassus and Eugène-Emmanuel Viollet-le-Duc in the mid-19th century, said to have been inspired by Victor Hugo's famous 1831 novel, The Hunchback of Notre-Dame. Hugo thought of the cathedral as a work of art authored by humanity itself.

Notre-Dame was rededicated in 1864 by the archbishop of Paris and subsequently survived World War I and the Liberation of Paris in 1944, following occupation of Nazi Germany during World War II.

Rebuilding
While the massive blaze destroyed significant portions of the church, a recent round of renovations saved many of the priceless artifacts housed in the cathedral. 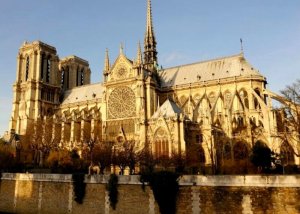 16 copper statues representing the Twelve Apostles and four evangelists were removed just last week for cleaning and restoration, and the famous stained-glass "rose" windows, which date back to the 13th century, were preserved.

The Crown of Thorns, believed to have been placed on the head of Christ, also survived, as did the facade of the twin bell towers, completed in 1250.

As the cathedral of the Archdiocese of Paris, Notre-Dame also contains the cathedra or bishops's throne, which is a symbol of the teaching authority of the Catholic Church.

Notre-Dame, however, is considered much more than a house of worship in France's secular society.

"Notre-Dame is our history, our literature, our imagination, the place where we lived all our great moments -- our plagues, our wars, our liberation. It's the epicenter of our life," said French President Emmanuel Macron on Tuesday.

Macron pledged to rebuild within five years, but architects estimated it will take 10 to 15 years.