Texas will hold the first primary of the election season on March 1st and the first election using the state’s new Republican-drawn political map.

Democrats and Republicans will choose their candidates for seven statewide seats, including Governor and Lieutenant Governor, as well as each party's nominees for district-based congressional and legislative offices.

The 15 seats on the State Board of Education are also up, as well as seats on the Texas Supreme Court, the Texas Court of Criminal Appeals and the Appellate courts. Municipal, local school board and ballot measures are also on the ballot in Texas' 254 counties. 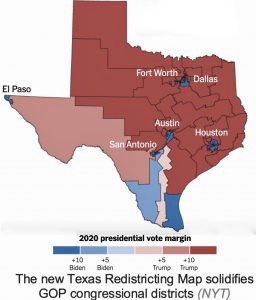 The Lone Star State
Texas was dominated by Democratic politics for over 100 years until the late 1990's when Governor George Bush (R) was re-elected and Republicans swept all statewide offices in 1998. The state's Republican control became complete in 2002 when the GOP won the state House for the first time since Reconstruction.

Texas has not elected a Democrat in a presidential election since Jimmy Carter beat Gerald Ford in 1976. The southern border state delivered a 52.06% to 46.48% victory for Donald Trump over Joe Biden in the 2020 presidential election, and a coveted 38 electoral votes - the second largest in the nation.

Republicans control all statewide Texas offices and both houses of the state legislature.

The current congressional delegation consists of 36 members, with 23 Republicans and 13 Democrats. Under the new GOP-drawn redistricting map, signed into law by Governor Greg Abbott (R) on October 25, Texas picked up two new US House seats for a total of 38.

Statewide
Governor: Incumbent Gregg Abbott (R), who is seeking a third term, is polling far ahead off his seven primary challengers, which include former state Senator Don Huffines and former Texas GOP chairman Allen West. On the Democratic ticket, former El Paso Congressman Beto O’Rourke, who earned national recognition after his 2018 US Senate and 2020 presidential bids, is favored over four other contenders. 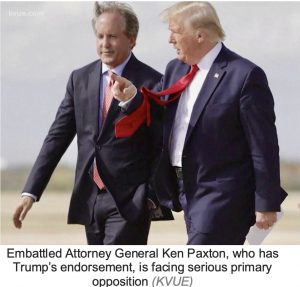 Lieutenant Governor: Incumbent Dan Patrick (R), who is seeking a third term, is facing five lesser-known primary opponents. Mike Collier, who was the Democratic nominee against Patrick in 2018, former State Representative Michelle Beckley, and former Vice Chair of the Texas Democratic Party Cara Brailey are facing off in the Democratic primary.

Comptroller: Incumbent Glenn Hegar, who is running for a third term, is facing business owner Mark Goloby in the Republican primary. Accountant Janet Dudding, attorney Tim Mahoney and author Angel Vega are facing off in the Democratic primary.

Public Lands Commissioner: In the open seat being vacated by George P. Bush (R), who is running for Attorney General, Jay Kleberg, whose family owns one of the largest ranches in the country, is facing three opponents in the Democratic primary. Eight Republicans, including state Senator Dawn Buckingham and San Antonio activist Weston Martinez, are also running to replace Bush.

Railroad Commissioner: One seat on the three-board commission is up, where incumbent Republican Wayne Christian is seeking reelection, facing four primary challengers. Democratic party staffer Luke Warford is the only Democrat running.

Three seats on the Texas Supreme Court are up for reelection, as well as three on the Texas Court of Criminal Appeals and 18 on the Intermediate Appellate Court. All 15 State Board of Education seats are up in 2022.

U.S. House
Of the current 36 Congressional Districts (23 Republicans, 13 Democrats), 31 incumbents are running for reelection and five are retiring. Texas picked up an additional two seats under redistricting for a total of 38.

Races to watch: Congressional District 15, currently held by Congressman Vicente Gonzalez (D), now running in the safely Democratic 34th CD after redistricting. Nine Republicans have thrown their hats in the race, as well as six Democrats. 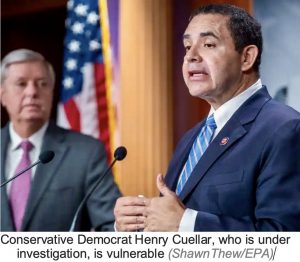 District 28, where conservative nine-term Congressman Henry Cuellar is targeted following a recent FBI raid of his home and campaign headquarters in Laredo as a part of an investigation of several people with ties to the former Soviet nation of Azerbaijan.

Cuellar is being challenged in the Democratic primary by educator Tannya Benavides and attorney Jessica Cisneros. Seven Republicans are running in the Republican primary.

Races to watch: House District 13, where State Representative Ben Leman (R) is retiring. Two Republicans, Angelia Orr and Dennis Wilson are vying for his seat, as well as Democrats Cedric Davis and Cuevas Peacock. House District 37, previously held by Representative Alex Dominguez (D) and which was redrawn into House District 38, going from 64% Democrat to 53%. Republicans Janie Lopez and George Rivera will face off in the primary, while Ruben Cortez Jr. Frank Puente and Luis Villarreal Jr. run in the Democratic primary. House District 52: Currently represented by Representative James Talarico (D), who was gerrymandered out of his district and is now running in the 50th district. In the now favorable GOP seat, four Republicans are competing in the primary, while Luis Echegaray is the only Democrat running.