Two more candidates, both from western states, have entered the Democratic presidential contest and quest to take on Donald Trump, or the Republican nominee, in 2020.

They are also the first governors to enter the race. The state house is traditionally considered the best breeding ground for presidential hopefuls as lawmakers who have served as administrators rather than those who have legislated through votes.

The current Governor of Washington State, Inslee, 68, was raised in Seattle, a fifth-generation Washingtonian. A graduate of the University of Washington and Willamette University College of Law, he served as a criminal prosecutor before being elected to the Washington House of Representatives, where he served from 1989 to 1993. 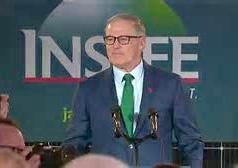 In 1992, Inslee was elected to represent Washington's Fourth Congressional District, but was defeated for reelection in 1994.

After an unsuccessful bid for governor in 1996, he served as regional director for the US Department of Health and Human Services under President Bill Clinton.

During his seventh term he left Congress to run for Governor in 2012, winning 51.5% to 48.5% over state Attorney General and Republican nominee Rob McKenna. He was reelected to a second term in 2016, defeating Republican Seattle Port Commissioner Bill Bryant, 54% to 46%.

Inslee served as Chair of the Democratic Governors Association for the 2018 election cycle, when Democrats won 16 seats, netting seven -- the most gubernatorial seats flipped by any party since 1994.

In Congress, Inslee was one of the chamber's most ardent advocates for combating global warming and one of the strongest defenders of the Clean Air Act. As governor he has pushed for clean energy, information technology and has led an alliance of states committed to upholding the Paris Agreement.

John Hickenlooper
Former Colorado Governor John Hickenlooper, 67, entered the 2020 race today, releasing an online video with pictures of Trump overlaid with the words, "I'm running for president because we're facing a crisis that threatens everything we stand for."

Hickenlooper, who served as the 42nd Governor of Colorado from 2011 to 2019, was born in Narberth, Pennsylvania, and is a graduate of Wesleyan University. After his career as a geologist, he launched a successful business career as co-founder of the Wynkoop Brewing Company in 1988. 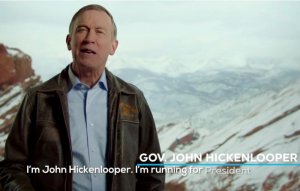 He was re-elected to a second term in 2014, defeating Republican former U.S. representative Bob Beauprez by 49% to 46%.

A moderate and "pro-business" Governor, Hickenlooper helped draw companies to Colorado and is credited with technical innovations in job growth.

Campaign Website: Hickenlooper 2020
Book: The Opposite of Woe: My Life in Beer and Politics (2016)

Other names still in play: US Senators Michael Bennet (CO) and Jeff Merkley (OR), Governors Steve Bullock (MT), and former Governor Terry McAuliffe (VA). Former US Attorney General Eric Holder has taken himself out of the running, citing his dedication to the National Democratic Redistricting Committee.