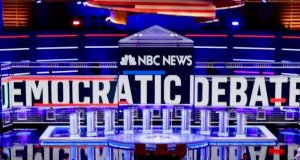 The Democratic National Committee (DNC) has announced the top 20 contenders to qualify for the second Democratic primary debate, to be held in Detroit, Michigan July 30th and 31st.

The first debate, which was held in Miami, Florida June 26th and 27th, broke records for the most-watched Democratic primary debate in history, with 18.1 million people tuning in the second night by television, and another 9 million via livestream online.

This is the second of an anticipated 12 official party debates over the course of the 2020 presidential cycle.

The first and second debates fall under the DNC's new debate requirements, announced in February, of meeting a polling threshold of 1% or a fundraising requirement of at least 65,000 individual donors.

For the third and fourth debates in the Fall, however, contenders must meet both the new polling requirements and the grassroots fundraising qualifications, which will double.

With the release this week of second quarter fundraising totals, the division between what is now the top tier of five candidates, and the remainder of the field, has become more distinct.

The qualifications become stricter in the Fall, which is expected to be an important turning point for narrowing the field.

Hence Detroit is a final opportunity for those nipping at the heals of major contenders Biden, Sanders, Harris, Warren and Buttigieg, to boost their numbers.

To accommodate the large field, the debates will occur over two consecutive nights in prime time, and capped at 20 candidates. In deciding the final 20 debate participants, candidates crossing both the polling and fundraising thresholds rank over candidates who only crossed one. The remaining debaters qualify based on polling performance.

Polls must be among approved national or early state polls in Iowa, New Hampshire, South Carolina, and/or Nevada. Any qualifying poll must include a full list of presidential candidates for respondents.

Related: DemDaily: The Contenders: By The Numbers