While Democrats may control the US Senate, their razor-thin majority of +1 means President Biden's goal of passing legislation on voting rights, democracy reform, the environment, raising the minimum wage and other key initiatives may realistically remain out of reach. That is, as long as the filibuster exists. 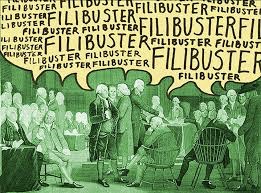 Its purpose, and its modern-day application in the name of democracy, is now widely debated.

History
When the US Congress was first formed in 1789, Senate rules allowed Senators to force a vote on the question being debated with only a simple majority.

In 1806, on the recommendation of Vice President Aaron Burr, the requirement was removed as part of an effort to simplify procedural rules.

It was not until 1837 that Senators witnessed the first filibuster, a motion by Whig opponents of President Andrew Jackson who opposed a motion to expunge censure of the president. Senate Democrats quickly used the new strategy themselves, filibustering in 1841 to try to stop the creation of a national bank.

Regardless, lawmakers would not fully realize the implications of the change for decades as utilization of extended debate to hold up legislation was not a common practice. That ended in 1917 when the Senate adopted the new cloture procedure, allowing a two-thirds majority to end a filibuster. 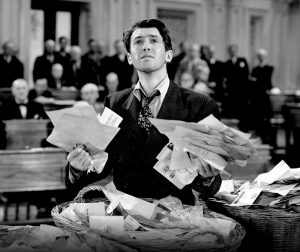 Many Americans first became aware of the filibuster through 1939 film "Mr. Smith Goes to Washington" (AFI)

Despite the creation of the cloture rule, the filibuster continued to be used prominently throughout the 20th century. Although the 1939 film Mr. Smith Goes to Washington lionizes the filibuster as a tool of the righteous minority, it was commonly used in the mid-20th century to block civil rights bills.

Over the following decades, the prevalence of the filibuster increased as partisan and regional tensions in Congress escalated, with some defending it as a defense against "the tyranny of the majority", while others proclaimed its use as a tool of partisan obstruction.

Despite multiple attempts to eliminate the filibuster, or at least limit its influence, it was not until 1975 that the Senate eased the requirement for cloture from two-thirds to three-fifths of the 100-member Senate.

Since then, the use of cloture to cut off or block debate has gone from a rarity to a basic fact of life in the Senate, skyrocketing to over 200 hundred filed in the 115th Congress. 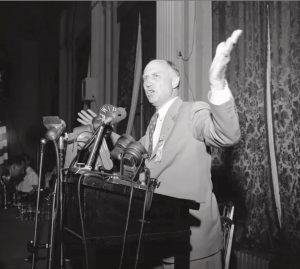 The record for the longest filibuster: The late US Senator Strom Thurmond (R-SC), who spoke for 24 hours and 18 minutes against the Civil Rights Act of 1957  (Bettmann/Getty)

When one party may use filibustering as a tool for stonewalling controversial bills, it is incumbent on the other to come up with the 60 votes for cloture to end or limit the debate time.

In effect, that means to pass that legislation through the Senate, it requires 60 votes instead of a simple majority.

Options
Short of securing the 60 votes needed for cloture, legislation may be passed through the budget reconciliation process by a simple majority.

In order to avoid a filibuster, Democrats deployed this option for passing Biden's American Rescue plan. The consequences, however, meant the exclusion of the proposed $15 minimum wage provision, which the Senate parliamentarian ruled was not admissible under the rules.

The parliamentarian's ruling can be overturned by Vice President Harris, as the presiding officer of the Senate, with the support of 50 Senators, but the White House expressed no desire to pursue that option.

Democrats in the majority could also deploy the "nuclear option," a parliamentary procedure that allows lawmakers to lower the number of votes needed for cloture from 60 to 51, essentially eliminating the filibuster for legislative votes. The option has been used successfully in the past to change the cloture requirements for executive branch, judicial and Supreme Court nominee votes. 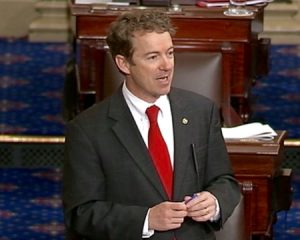 The last marathon filibuster: Senator Rand Paul (R-KY) in 2012 for 13 hours in opposition to the nomination of John Brennan to as CIA Director

Given the vocal opposition to eliminating the filibuster by moderate Democratic Senators Joe Manchin (WV) and Kyrsten Sinema (AZ), however, the prospect of even the 51 votes needed to exercise that option is unlikely.

That brings us back to the gridlock in Congress and the challenges of the new administration, despite Democrats having control of all three houses.

True change may fall with even greater weight on the shoulders of President Biden and his promise of working "across the aisle" to accomplish our shared objectives for the American people.

"The truth is both parties have a love-hate relationship with the filibuster, depending on if you are in the majority or the minority at the time. But this is not healthy for the Senate as an institution." -- Senator Chuck Schumer, 2010.

August 6, 2019 In addition to the contest for the White House, all 435 Members of the US House are up for reelection, and recent retirements are shifting the landscape for what some are now...