Voters in next week's August 7th Missouri primary election will be voting on a ballot initiative to overturn the state's pending right-to-work law, which has major national implications.

Although federal law already makes it illegal to force an employee to join a union or to make political contributions, the last decade has witnessed an aggressive movement by conservatives to pass right-to -work legislation, or similar constitutional amendments, in individual states.

The Missouri initiative also comes on the heels of the Supreme Court of the United States' (SCOTUS) Janus decision that imposed a similar policy on public-sector unions nationwide -- ruling that requiring a public-sector employee to join or pay "agency" fees to a union for the cost of collective bargaining, violated that employee's First Amendment right to free speech. 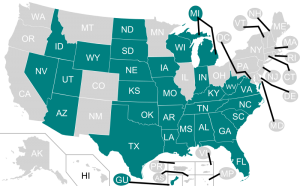 28 US states, including Missouri, and the territory of Guam, currently have right-to-work statutes.  26 of those states voted to put Trump into office.

Enactment of the law, however, was put on hold after opponents of the bill gathered more than 300,000 signatures to put the measure on the ballot this November.

However, In May of 2018, Republican lawmakers, fearing a negative impact of the measure on GOP candidates running in November, voted to move up the vote to the August 7th primary ballot. 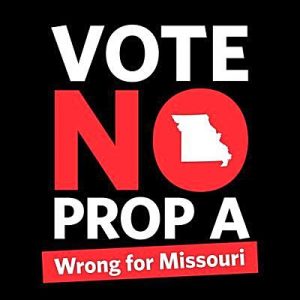 Right-to-Work for Less
Counter to the title, "right-to-work" laws do not aim to protect or provide general guarantee of employment to people seeking work. In fact, seven of the 11 states with the highest unemployment rates have right-to-work laws on the books.

Rather the laws are a government ban on contractual agreements between employers and employees that require workers, regardless of whether they belong to the union or not, to pay for their fair-share cost of union representation in bargaining for benefitsfor all employees.

Dark Money
$5+ million in "dark money" has gone into support of Proposition A, the largest portion of which originally came from A New Missouri, a group associated with former Governor Greitens, who resigned from office June 1st amid finance and ethics scandals. The nonprofit organization is also the subject of investigation for alleged ethics violations.

The anti-union National Right to Work Committee, which is supported by the conservative Koch family, contributed $765,000 to local pro-RTW organizations.

By comparison, national unions and anti-RTW organizations have significantly outspent theopposition, with a total of $16.96 million (as of July 26, 2018).  Contributions to We Are Missouri, which is leading the 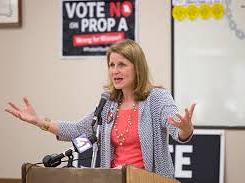 The Battle
The increasing state-based attacks on labor by groups like American Legislative Exchange Council (ALEC) and the National Right to Work Committee are aimed at weakening an already declining union workforce by depleting their financial base, bargaining power and ability to organize.

The Missouri proposition is considered a crucial win for both sides in the fight, but more is at stake for organized labor.  If unions lose the battle to repeal Prop A, it could set a precedent for other states' actions throughout the country.

At a union rally in Kansas City this month, national AFL-CIO Secretary-Treasurer Liz Shuler said, "Missouri is very significant in the national context. What happens here in Missouri will definitely set the tone, not only for the labor movement, but for the election in November."

A July 7, 2018 Remington Research Group/Missouri Times poll (sample 1,034 voters) showed "Vote No on Proposition A" forces winning 56% to 38%.  The battle for the future of labor, however, is far from over.