Just 60 minutes after the fourth day of the 11-hour impeachment hearings ending last night, the top ten Democratic candidates for President of the United States graced the stage for the Fifth Democratic Primary Debate.

Wednesday night's debate, held at the new Tyler Perry Studios in Atlanta, Georgia did not produce a clear winner in the still-crowded field of contenders, but it did provide a few coveted standout moments for those struggling to stay in the contest.

The event was comparatively cordial, coming directly off the fourth day of damning testimony that starkly laid out the Ukraine corruption plot led by President Trump, and his betrayal of our country's most sacred office. 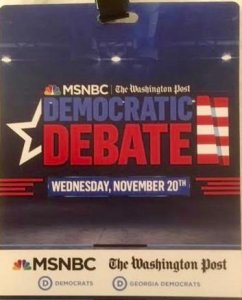 The Highlights
Predictably, the first question was on impeachment.

Senator Elizabeth Warren (MA), pointing to the lack of credentials of Ambassador Sondland, a key impeachment witness, attacked "what's happening in Washington, the corruption, how money buys its way into Washington," and challenged her fellow candidates to prohibit appointment of donor Ambassadors.

Quoting former Vice President Walter Mondale, Senator Amy Klobuchar (MN) said, "We told the truth, we obeyed the law, we kept the peace. That is the minimum that we should expect in a president of the United States."

Senator Bernie Sanders (VT): "We have ... the most corrupt president in the modern history of America. But we cannot simply be consumed by Donald Trump, because if we are, you know what? We're going to lose the election."

Former Vice President Joe Biden (DE): Noting that it is clear that both Donald Trump and Russian President Vladimir Putin don't want him to be president, said: "Who is most likely to do what needs to be done, produce a Democratic majority in the United States Senate, maintain the House, and beat Trump?"

Senator Kamala Harris (CA): Referring to the impeachment hearings, "What we saw today is Ambassador Sondland by his own words told us that everyone was in the loop. 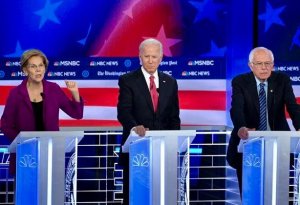 That means it is a criminal enterprise engaged in by the president, from what we heard today, the vice president, the secretary of state, and the chief of staff.  We need the same set of rules for everybody...we have to bring justice back to America for all people, and not just for some."

On how to heal a country divided, Warren said we need "An America that works for the people, and not just for the rich folks," moving into her proposed Wealth Tax, which place "2 cents on the top 1/10th of 1% of this country."

Senator Cory Booker (NJ): "We've got to start talking not just about how we tax from a stage, but how we grow wealth in this country amongst those disadvantaged communities that are not seeing it."

In contrast to past debates, healthcare was a passing subject. Kristen Welker's question to Warren about potentially losing general election votes over her Medicare for All approach, provided the Massachusetts Senator an opening to delve into the plan -- with little pushback from others.

Sanders: In his now trademark quip, Sanders started his response with "Thank you, I wrote the damn bill."

Biden: "We can do this without charging people -- raising $30 trillion, $40 trillion. The fact is that right now the vast majority of Democrats do not support Medicare for all." 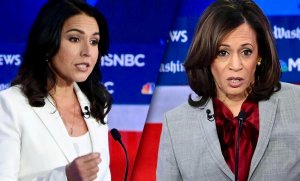 One of the few contentious exchanges came between Congresswoman Tulsi Gabbard (HI) and Harris, who effectively countered Gabbard on American foreign policy.

Gabbard: "That our Democratic Party, unfortunately, is not the party that is of, by, and for the people. It is a party...influenced by the foreign policy establishment in Washington, represented by Hillary Clinton and others' foreign policy, by the military industrial complex, and other greedy corporate interests."

Gabbard called for an end to the "ongoing Bush-Clinton-Trump foreign policy doctrine of regime change wars... that have cost us thousands of American lives."

Parker: "Senator Harris, any response?" Harris: "Oh, sure."
"I think that it's unfortunate that we have someone on this stage who is attempting to be the Democratic nominee for president of the United States, who during the Obama administration spent four years full time on Fox News criticizing President Obama...who buddied up to Steve Bannon to get a meeting with Donald Trump ... and then spends full time ... criticizing the Democratic Party." 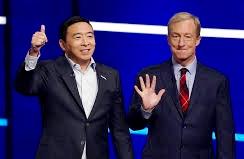 When asked about his criticism of special interest money in the political process, while spending over $300 million himself to influence it, billionaire Tom Steyer (CA) pointed to his record of putting "together coalitions of ordinary American citizens who have "taken on and beaten the oil companies,...tobacco... utilities...and drug companies."

In a nod to labor, Steyer also pointed to his founding of "NextGen America, the largest youth voter mobilization in American history, in partnership with seven national unions," to "push power down to the America people" and real "structural reform in Washington, D.C."

Tech entrepreneur Andrew Yang came to Steyer's defense, "Tom has been spending his own money fighting climate change. You can't knock someone for having money and spending it in the right way, my opinion."

Noting "you've made a virtue of your outsider status," having "never served in military or in government," Ashley Parker asked Yang what makes him prepared to handle a major disaster. Yang said he would focus on the real threats, including "potentially losing the AI arms race to China right now...We are 24 years behind on technology... we got rid of the Office of Technology Assessment in 1995. I guess they thought they'd invented everything."

When asked about by Andrea Mitchell why, as a small town Mayor, Democrats should bet on him, Mayor Buttigieg (IN), said "I know that from the perspective of Washington, what goes on in my city might look small, but frankly, where we live, the infighting on Capitol Hill is what looks small." 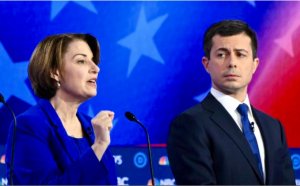 Mitchell asked Klobuchar about her comment regarding Buttigieg, 37, who is leading in the Iowa Caucus polls, quoting: "Of the women on the stage, do I think that we would be standing on that stage if we had the (lack of) experience he had?"

Klobuchar: It's true."Women are held to a higher standard. Otherwise, we could play a game called name your favorite woman president, which we can't do, because it has all been men...And if you think a woman can't beat Donald Trump, Nancy Pelosi does it every single day."

Sanders: On ending the war in Afghanistan: "One of the big differences between the vice president and myself is he supported the terrible war in Iraq and I helped lead the opposition against it....it is time to bring our troops home. But unlike Trump, I will not do it through a tweet at 3 o'clock in the morning."

When asked what he would say, as the new president, in his first call with Russian President Vladimir Putin, Yang said, "Well, first, I'd say I'm sorry I beat your guy...And, second, I would say the days of meddling in American elections are over." 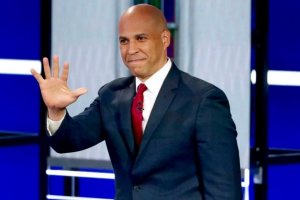 Booker had a solid performance (Bazemore/APP)

In one tangle, Gabbard accused Buttigieg of saying he wanted to send troops to Mexico to fight drug cartels. He successfully brushed her aside, saying "Do you seriously think anyone on this stage is proposing invading Mexico?"

On African American voters, who currently overwhelmingly support Biden, Buttigieg said, "I welcome the challenge of connecting with black voters in America who don't know yet know me...While I do not have the experience of ever being discriminated against because of the color of my skin, I do have the experience of sometimes feeling like a stranger in my own country, turning on the news and seeing my own rights come up for debate."

Booker: "I have a lifetime of experience with black voters," he said. "I've been one since I was eighteen." Saying "black voters are pissed off" about politicians who appeal to them only when they need votes, Booker used the opportunity to criticize Biden for opposing federal marijuana legalization.

"I thought you might have been high when you said it!...... because marijuana in our country is already legal for privileged people. The war on drugs has been a war on black and brown people."

In the end, the polling numbers are not expected move significantly. Snaring a total viewership of only 6.5 million, the debate was, literally, squeezed inbetween the marathon impeachment hearings going on this week -- where efforts to oust Donald Trump are on a different track.

March 25, 2020 Voters will cast their ballots for 435 congressional races in November, and as part two of our House Races and Ratings, to follow is our rundown of the most vulnerable Democrats...